Can You Handle Being Second Choice, According to Your Personality Type 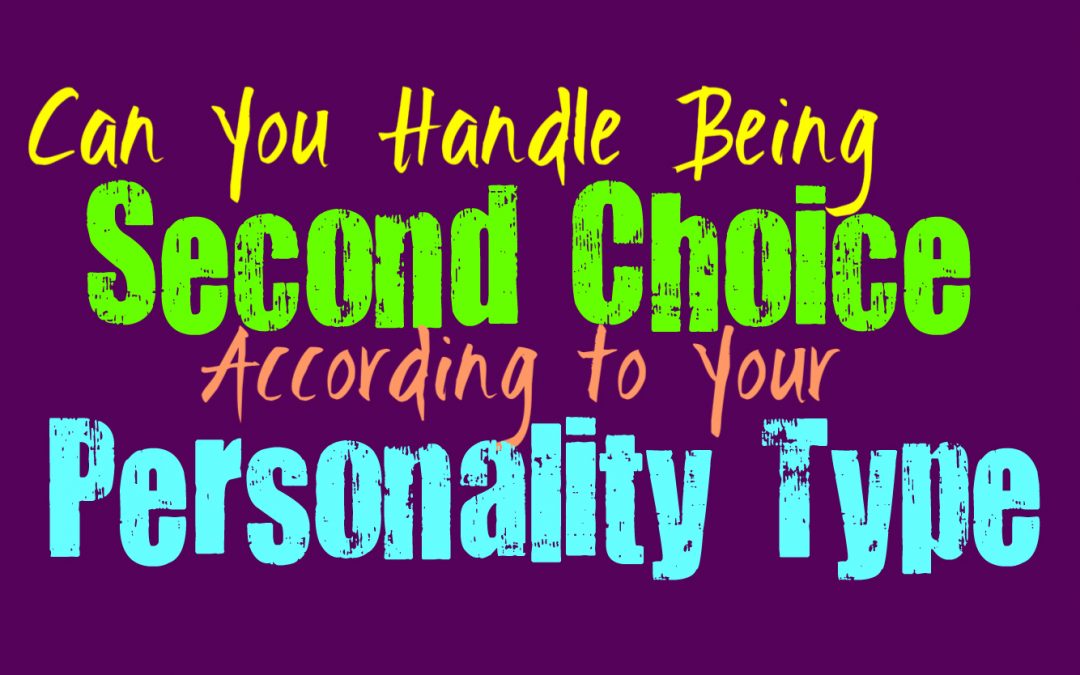 Can You Handle Being Second Choice, According to Your Personality Type

INFJs can handle being second choice but only if the circumstances are right. They understand if someone might have chosen another path, but later in life ends up circling back to the INFJ. They might be willing to give this person a chance if things just didn’t work out the first time around. They aren’t necessarily obsessed with being picked first, but they do want to be valued by the people in their life. For the INFJ it is more about people realizing they made a mistake by not valuing their connection, and so in these situations they will do their best to overcome those negative emotions. At the same time INFJs want to be around people who care for them enough to pick them first, but they will often internalize these negative emotions.

ENFJs often want to be chosen first in most situations, whether this be with relationships, careers or hobbies. They don’t like feeling as though they were passed up for someone else, and only become picked because that person backed or for whatever other reasons it might be. ENFJs are perfectionists and so any situation where they are second choice is going to be frustrating to them. This can often feel like a failure in a lot of ways, and leave the ENFJ wanting to reassess their own actions and their career or relationship choices. They will often internalize these feelings and do their best to improve for the future, but ENFJs definitely struggle when they are second choice.

INFPs can be somewhat understanding when it comes to situations where they become second choice. They often don’t mind becoming second choice in their careers, and will do their best to take this graciously. INFPs understand that sometimes things don’t go as they expect or plan, and not every choice leads to them being the first one picked. They can often take this without being too prideful, but of course it does hurt a bit. When it comes to romantic relationships though, the INFP often wants to be the person’s ideal choice. They want to find a connection where they feel more like soul mates, than just someone their partner is stuck with.

ENFPs bounce around a lot with their decisions, so in some ways they can understand when other people might feel this way as well. They don’t expect to always be first choice in every situation, since they realize that sometimes people just need to experience different things before realizing what the best choice will be for them. So while ENFPs don’t mind being the person chosen second, they want that person to realize that they are the best choice and that any previous choices were simply a mistake.

INTJs really don’t like being second choice, but they often respond to this by pushing themselves harder to be chosen first next time. When it comes to career situations the INTJ wants to be the best they can, and so they are certainly perfectionists. Their perfectionist nature can make it difficult for the INTJ to really cope with being second choice, but in these situations they will just push themselves harder to improve and become better next time. When it comes to relationships they don’t like to be prideful, it is more about figure out if they are right for one another than basing it on something emotional like being someone’s first choice. As long as that person is right for them and is fully committed to the relationship, they can move forward happily.

ENTJs can take it rather harshly if they aren’t picked first for things, and really don’t enjoy being second choice. ENTJs are perfectionists and so if something doesn’t go their way they often feel like they have failed in some ways. They will push themselves to improve and find a way to get things right the next time around. For ENTJs this can be challenging though, since they really prefer being the best at what they do the first time around and really don’t enjoy feeling like they could have been more efficient.

INTPs often try to cope with being second choice by figuring out something more suited to them. If they weren’t picked first they might need to reassess the situation and figure out if this is the right path for them. Whether this is their relationships, careers or hobbies, INTPs are willing to analyze and figure out why things didn’t quite go their way. They might accept being second choice and find their way to move forward from this situation. They do their best to analyze and figure out what went wrong, and will be willing to find a way to improve.

ENTPs often bounce around from one thing to the next, and sometimes their second choice is the one they prefer in the end. Since they often enjoy trying new things, this helps the ENTP cope with being second choice a bit better. They might become second choice in some situations, but they prefer to be the best choice in the end. As long as the person picking the ENTP second realizes that they made a mistake, they will be capable of moving forward and coping with the situation.

ISTJs often respond to being second choice by pushing themselves to improve and be better. They work hard and strive for a sense of perfection, and so being second choice often means they need to find ways to improve. ISTJs do realize that being second choice isn’t always their fault though, and so they do their best to make their abilities more obvious next time around. When it comes to relationships ISTJs also realize that they might not stand out enough to be chosen first, but they do their best to connect with the people who will recognize their value and become committed to what they have together.

ESTJs are driven people with a perfectionist nature, and so sometimes they can get rather down on themselves if they are second choice for anything. They want to be the best at what they do and prefer to be chosen first with things. They become truly upset if their actions don’t speak loud enough for others to fully recognize their skills and abilities. ESTJs will respond to this by trying to improve themselves and become better for next time.

ISFJs try their best to cope with being second choice by improving or working hard to be picked next time. They don’t like having to be cutthroat in order to draw attention to themselves, and so sometimes they do become second choice because of this. ISFJs are caring and capable people, but they don’t like having to be overly competitive in certain situations. They work hard to allow their actions to speak for them, and will likely internalize when they become second choice.

ESFJs definitely internalize when they become second choice and will often blame themselves in some ways. They don’t like being the second choice with anything, mostly because they are naturally perfectionists. ESTJs can struggle when they feel like they weren’t good enough to be chosen first, but they will often take this and do their best to improve the next time around. When it comes to being chosen second in a relationship, this really isn’t acceptable for the ESFJ and will often lead to them moving on.

ISTPs don’t really focus on whether or not they are first choice, they simply live in the present moment. They understand that choices can become skewed because of the circumstances, and so they are willing to move forward and try not to take it too personally. For them it is more valuable to focus on the moment and if they are being chosen for the right reasons now. They accept that people make mistakes and so if they recognize the value of the ISTP now, they can move forward.

ESTPs can sometimes internalize being second choice and this often hurts them more than they let on. They can be rather competitive people and they want to be the one that is chosen first most of the time. Whether this comes to career or relationships, ESTPs want to be someone that is valued and seen for their capabilities. They don’t like being someone that isn’t picked first, especially when it comes to romantic situations.

ISFPs don’t like being second choice, especially when it comes to romantic relationships. They can do their best to look past this though, and will try to move forward instead of dwelling on the past. ISFPs don’t like getting caught up on how things should have gone, instead they want to live their lives in the present and focus on making things better. They want to be the person their loved choose first, instead of being their second or backup choice.

ESFPs really don’t handle being second choice well, especially since they prefer being center of attention. They want to be someone that their loved ones value, sometimes above all the rest. For the ESFP it is important to be chosen first with the things that matter most to them, which is often their loved ones and their career. Being second choice can be a serious blow to their ego and will definitely hurt the ESFPs feelings deeply.