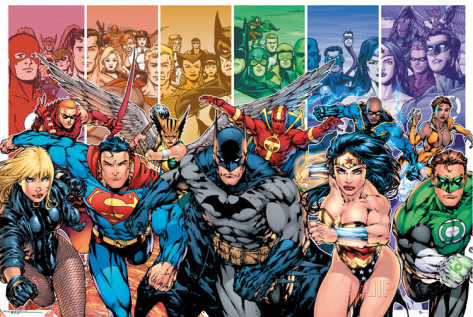 We originally brought you Myers Briggs (MBTI) Marvel Superhero Characters. Now we have decided to compile all the best DC Superheroes and Heroines (along with a few Super Villains) that fit each Myers Briggs Personality Type. Enjoy!

Poison Ivy is intelligent and lives in her own inner world. She is very capable of seduction and knows how to lure people into her reality. She is in touch with nature, and feels a strong moral obligation to protect what she believes in. Her strongest drive is protecting the environment and the plants which she loves so much.

Wonder Woman is outgoing and always supportive. She is caring, friendly, and intensely loyal. She is nearly the perfect character, with a strong will and a warm heart. Wonder Woman never gives up, and has a larger than life presence. She is capable of being what everyone around her truly needs.

INFP- The Flash aka Barry Allen

Barry Allen is warm and introverted. He is very laid back and doesn’t like to rock the boat too much. He is extremely intelligent, and often lives in the depths of his inner mind. He believes strongly in doing what is right, living by his strong internal moral compass.

Harley Quinn, a key member of the Suicide Squad, is a strong and intensely loyal character. She develops connections with people and does not break those connections no matter what. She has an outgoing and offbeat sense of humor, and is a little zany sometimes. Although she is seen as somewhat mad, she is extremely intelligent and imaginative. She is romantic and outgoing, and driven strongly by her emotions.

Bruce Wayne is introverted and extremely intellectual. He is a billionaire, playboy and philanthropist. He has a strong goal to seek vengeance for his parents death, and bring justice to criminals of Gotham. He trains himself physically, and crafts his own persona solely on his intelligence. Batman is capable of becoming a superhero without any superpowers, because of his powerful intellect.

Founding member of the Justice League of America, Aquaman is a powerful superhero. He is capable of surviving the earth and seas greatest depths of pressure and temperature. He is outgoing and very skilled at commanding a strong political presence. He is also a capable leader and commander.

INTP- The Riddler aka Edward Nigma

The Riddler takes joy in incorporating riddles and puzzles into his crimes, leaving behind clues for the authorities to attempt to figure out. He takes pride in his own intellectual superiority and is smooth talking, yet a bit quirky. He is often extremely stuck inside his own mind, creating a reality that is apart from the real world.

The Joker is a criminal mastermind, and is extremely intelligent. He has a sadistic sense of humor, and is an outgoing character. The Joker has no superpowers, but relies solely on his own genius to concoct weapons. Living in his own reality, the Joker has a way of pulling others into his madness, with his charismatic personality.

John Stewart is an architect and a veteran. Stewart is reliable and loyal, but also logical. He is the back-up for Green Lantern, and comes in when he is most needed. He is strong-willed and follows what he believes in.

Hawkman is very brave, and faces dangerous threats without backing down. He is headstrong and reliable, with a strong sense of duty.

Clark Kent is very selfless and kind-hearted. He believes that he has a duty to protect others, even though it is not his job to do so. He is reliable and supportive to those around him. He is outgoing when he needs to be, but enjoys being alone and recharging by himself. He is a very strong and harmonious character, who just wants to make others happy.

Starfire is outgoing and strong-willed. She holds onto the traditions of her home planet, and is loyal to her people. She is the glue that keeps her team together, and does what she can to be supportive of them. She is sometimes seen as a naive, but always strong character.

Bane is intelligent and strategic minded. He is in touch with the physical world around him, and is very strong. He is brave, and when he sets his mind to something he is unstoppable.

Catwoman is extremely quick and in touch with the physical world. She is very headstrong and tricky, and lives in the grey area of morality. She challenges authority and likes to make her own set of rules that she lives by.

Zatanna is a powerful magician and a natural performer. She is very bubbly, fun and charming. She loves attention and being in the spotlight, but is also a bit of a loner. She occasionally lets her emotions get the best of her, but is very confident and independent.

Hal Jordon is outgoing and comfortable in the spotlight. He is aware of the physical world around him, and is very fact-paced. He is extremely brave and capable of taking on his enemies no matter what it takes.