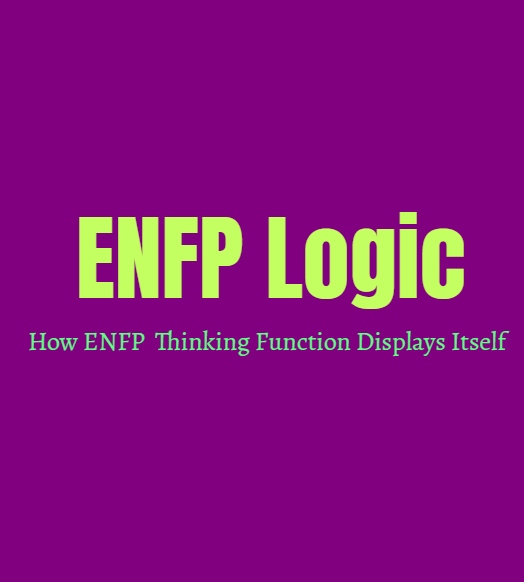 ENFPs are often viewed as emotional and creative people, and while they do focus on emotions that doesn’t mean they lack a strong thinking function. Their extraverted thinking plays an important role in how they absorb and respond to information, and so it is important to dig a little deeper into understanding how this makes the ENFP tick. For the ENFP the use of their extraverted thinking is very important to them, it just presents itself in somewhat different ways than it will for a more dominant thinking type. ENFPs care about growth and are always trying to find ways to expand their minds, and sometimes this means utilizing that thinking function in order to learn and grow in the right directions.

ENFPs are more strongly focused on their inner morals and values, which is why Te can become less prominent or obvious for them. Being that their extraverted thinking is their tertiary function, it won’t express itself in more obvious ways. Their Te does however align with their extraverted intuition in order to help them organize information in order to come up with new ideas. ENFPs are idea people and they thrive on possibilities and new experiences. This is part of what is so connected to their thinking function, since the ENFP needs some way of organizing facts and ideas so that they can keep better track of what is going on inside of their minds. Their thinking function helps them to really organize these many different ideas, and often helps them when it comes to planning out their next move. ENFPs enjoy seeking out new goals once they have become excited and inspired by something, and they use their Te as a means of doing this. ENFPs can sometimes be viewed as scattered people, simply because their imagination and passion can pull them in so many different directions. There are times when they have goals they truly want to achieve and their extraverted thinking plays a very important role in this. Without this function the ENFP would struggle to find a sense of organization and planning so that they can move forward towards their goal.

ENFPs might not use Te often and if they do it can be a bit draining for them, but as they get older they certainly start to develop this more. Since it isn’t their inferior function it strains the ENFP less to work on their thinking function. It is something they can develop as they mature and this helps the ENFP to become a more organized individual who is capable of really going after their goals and making them happen. ENFPs actually enjoy pushing themselves a bit, or else they can become bored with their situation rather easily. Without some sort of growth in their lives the ENFP might become unhappy, as they really don’t like feeling stagnant. Their minds are so active and ready to take on new things, and so the ENFP needs challenges and ways of pushing themselves in order to really feel rewarded by their lives and environment.

How it is Expressed

The ENFPs thinking function is expressed by their ability to remember so many details, even the little things most people would forget. ENFPs can often hold onto information for long periods of time, some things they might consider to be useless facts that they can recall. ENFPs can also use this as a means of debating with someone, or even find themselves accidentally using their Te when they are truly mad at someone. They might snap on this person and will come out with a long list of facts and reasons why the other person has wronged or upset them. This is something which can be referred to as the Te Slap, and can be rather intimidating when this does occur. Most of the time though the ENFP expresses their Te by their ability to hold onto facts and use them when they are problem solving or trying to finish an important project. ENFPs are highly capable and often talented people, and their extraverted thinking does play a role in this.

The greatest weaknesses with the ENFPs thinking function is simply when they use this more than they should. Since it is not their dominant or go to function, the ENFP can become drained if they push themselves to utilize this too much. They cannot live their lives focused solely on organization and a strict schedule, and really need to have some flexibility around them. When the ENFP is forced to constantly focus on abiding by rules and schedules, they find themselves becoming truly overwhelmed. The ENFP might be forced into their shadow which leaves them focusing on things which aren’t really as important to them. They become a much more stressed and on edge version of themselves, and it really isn’t healthy to maintain this for a long period of time. While the ENFP can certainly use their thinking function and are good at pulling together facts and information, they need to let up on this and not put too much pressure on organization. For the ENFP having space and room to do their own thing is truly important. They need plenty of freedom and options in order to really feel rewarded by whatever they are doing.