Here’s How Easily You See Potential Within Others, Based on Your Personality Type 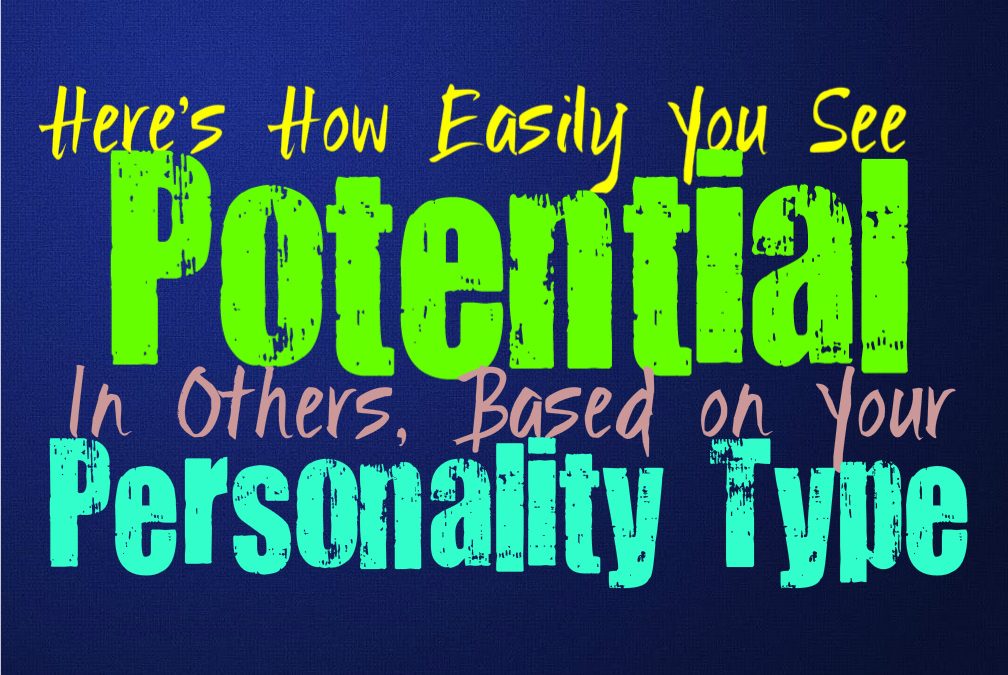 Here’s How Easily You See Potential Within Others, Based on Your Personality Type

INFJs can often see the potential in others, especially when it is someone they care for deeply. They can sometimes get themselves into trouble because of this, seeing someone’s inner spirit instead of their behaviors. While they can see the possibilities, INFJs often want to try and help this individual reach this full potential. They can invest a lot of their own time and energy simply trying to help others become their best selves. This can get the INFJ hurt often, since they are trusting in people who don’t always have the desire to become the person they are capable of being.

ENFJs definitely do see the potential in others and often seek to help them change their ways. ENFJs care about the well-being of others and want to do whatever they can to make a difference in their lives. They don’t want to be the ones to hold others back, instead they want to help them improve upon themselves. ENFJs can sometimes get themselves hurt because they trust in someone’s potential instead of their actual actions. ENFJs just see the good in those around them and strive to help them be who they truly are capable of becoming.

INFPs often see potential in others, especially someone they care for deeply. They want to make a difference in the lives of others and do their best to help them become who they were meant to be. INFPs can sometimes fall in love with the potential in others, instead of actually seeing their present actions. This causes the INFP to get hurt fairly often, since they invest so much into people who haven’t quite reached that potential. INFPs will try to keep believing in this person until it is obvious they are only hurting themselves.

ENFPs definitely do see potential in others, and can see what lies inside of others. While they look for potential in others, ENFPs can sometimes have a cynical side. The ENFP who has been hurt many times starts to struggle with the idea of potential, and often just wants to find someone who is proving themselves by their actions. They no longer want to keep investing their energy in people who simply are not living up to their inner potential.

INTJs can certainly see the potential in others, but they are more focused on their proven actions. They can see where someone is capable of improving and are willing to help if that individual proves themselves. INTJs realize that making changes can take time, but they want to see hard work and consistent improvement. Someone who continues to make attempts but never actually pushes hard enough to succeed, is not worth the INTJs time. They will however invest in people who prove that they are changing and working towards their full potential.

ENTJs often believe that people are capable of growth and change, but they are rather skeptical. They don’t believe that others will make these changes unless they see proof of this firsthand. The ENTJ is willing to help others improve and grow, as long as they see consistent effort and signs of improvement. They enjoy assisting others towards a better path, and simply want loyalty in return. They will do their best to see that those around them reach their full potential, but won’t waste their energy on someone who simply isn’t putting in the right amount of effort.

INTPs are often capable of seeing the potential in others, but they can be rather cynical at times. They often have witnessed people failing to live up to their potential, even seeing this within themselves sometimes. INTPs can become bogged down by constantly hearing others speak of their potential, never feeling like they can truly live up to it. They strive to see the potential in others as well, but they don’t want to put pressure on them to achieve this. They will help if others request this of them, especially when someone truly seems to be in need.

ENTPs can definitely see the potential in others, as well as in themselves. They are constantly looking at the different possibilities in the world around them and strive to experience as much as they can. ENTPs will often be capable of seeing the potential within others, and might even want to help. They sometimes can be a bit pushy though, especially when it comes to their loved ones. ENTPs hate stagnancy and don’t do well with people who constantly try and hold them back from expanding and growing.

ISTJs don’t often find it easy to see the potential in people who continue to fail and make poor decisions. While they believe that everyone is capable of improving and mending their ways, ISTJs need to see some proof of this happening. They become frustrated with people who simply do not put in the full effort requires to change, and will not want to waste their energy on them. They are practical people and so the ISTJ believes in helping those who help themselves.

ESTJs often believe that most people are capable of change and of improving themselves, but they know that most will not follow through with this. ESTJs look at actions instead of potential, and don’t like wasting their energy on people who refuse to change. ESTJs work hard to help their loved ones, and do try their best to motivate them towards a better life. They simply become exhausted by those individuals who cannot seem to find a way to improve.

ISFJs can easily see the potential in others, especially when they have a truly good heart. ISFJs sometimes invest their time and energy into people simply based on what they can see inside of them. When they care deeply for someone they often spend a lot of time trying to help those people improve and better their lives. Sometimes ISFJs can spend a lot of their own energy trying to bring out the best in the people they love.

ESFJs see the potential in others rather easily, which can sometimes get them hurt. The fact that they can see someone else’s potential causes the ESFJ to invest a lot of their time and energy into helping that person improve. Not everyone has a desire to reach their full potential or become the best version of themselves they can be, which can leave the ESFJ wasting their time trying to help this person. Often this can lead to the ESFJ getting deeply hurt by someone who simply isn’t what they expected.

While ISTPs can often see the potential in others, they don’t really invest much of their energy into this. They are more interested in someone’s current actions, than what they try to project to others. ISTPs can be a bit cynical when it comes to people, and don’t always believe that they will actually change. They often need to see someone prove themselves before the ISTP believes that they are capable of actually reaching their full potential.

ESTPs do often see potential in some people, but this is often the ones they already care deeply for. They can be a bit bias when it comes to the ones they love, only seeing the good in them. ESTPs don’t mean to do this but they can occasionally make excuse for the people they care for. They want to see them reach their potential, but at the same time they can be drawn to the flaws. ESTPs focus on the present moment, but their bias towards their loved ones can skew this sometimes.

ISFPs can definitely see the potential within those around them, and often see who they are capable of becoming. While they can often see this potential, ISFPs have a hard time being patient enough to wait for a change. They want to find someone who they connect with deeply, without having to wait for that person to become someone better. They want that connection regardless of this person’s actions, or even their desire to change.

ESFPs see the potential in certain people, often the ones they have already developed feelings for. ESFPs can be bias with the ones they love, wanting to see them become their best selves. While they are certainly bias with people they care for, ESFPs have a hard time looking into the future. They want things to be right in the moment, and continue to expect people to change quickly. They don’t look to the past or the future, instead they live in the present and will hope for the best in those little moments that matter.