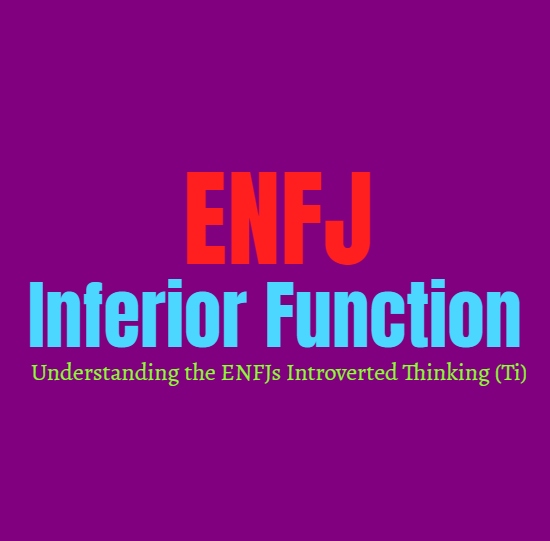 The ENFJs inferior function is their introverted thinking or (Ti) which focuses inward in order to make logical sense of everything.For the ENFJ this is their inferior function, and so it shows itself in much different ways than ISTP/INTP personality types. For them it becomes more challenging to use their Ti constantly, as it just doesn’t make sense to apply too much pressure to this function. That doesn’t mean it won’t be used, as even their inferior function serves a very important purpose for the ENFJ in their daily lives. This is why it is so useful to understand how functions behave in different placements in an individual’s function stack. For the ENFJs this Ti can come out in unusual and often subconscious ways, where most would not even realize that it is being utilized. Without a sense of balance when it comes to functions, the ENFJ would become wholly focused on the emotions of others and would lose sight of everything around them in a rather unhealthy manner.

What Is Introverted Thinking (Ti)

Introverted thinking wants to be able to be accurate and precise with everything, not wanting to leave out important information. This is a sort of internalized framework of how the world works, which makes it less connected to the outside world and expectations of what others find logical or right. Instead this is something which can be a bit more open to change or possibilities, rather than previously proven methods. INTPs is useful when it comes to factual information and the concrete world, but it also capable of absorbing and considering theories and things which have not yet been proven. It is not afraid to branch out and explore ideas and a sense of imagination in order to discover something new and untouched. This function helps the individual to be capable of seeing things from a less concrete place, and instead uses their own sense of reason and problem solving in order to understand the world. This function is also very good at solving problems though, and can analyze the situation and figure out the most useful approach. It might not be based on doing everything in a step by step manner, instead Ti users might skip or adjust the steps to how they see fit.

The Role of the ENFJs Inferior Function

For the ENFJ their introverted thinking actually helps them to analyze certain information that their extraverted feeling gathers for them. The ENFJs dominant Fe is very focused on other people and recognizing their behaviors and emotions, which is something that helps them understand others and help them better. When the ENFJ uses their Ti it is still very focused on people in most cases, and helps them to take in this information they gather from the use of that Fe. Using Ti is not something which comes naturally for the ENFJ for long periods of time, instead they pull this out only when necessary. The idea of applying too much pressure on their inferior function as a means of making choices and viewing the world, is something which just doesn’t make sense for the ENFJ. They need to approach things using their dominant function, as well as utilizing their auxiliary function to assist. For the ENFJ their introverted thinking function is what helps them to problem solve, especially when it comes to work or anything which requires in depth thought. It also helps them to organize their internal thoughts, helping them to make sense of ideas and information. It can be a struggle for the ENFJ to use this function in the same way INTPs or ISTPs do, and so grasping certain theoretical ideas can seem exhausting after long periods of time.

When the ENFJ is under extreme stress or they apply too much pressure to their dominant function for too long, they can go into their grip. This ultimately causes their inferior function to take control, which is not natural for the ENFJ. They need to be focused on a combination of their functions, and their introverted thinking should not be in charge for long periods of time. When this happens the ENFJ can become over-analytical, and finds themselves obsessed with being accurate and precise about every decision they make. They can also become rather short-tempered to those around them, not really focusing on the way their words could hurt or offend others. They find themselves analyzing every detail around them, wanting to grasp the best way to problem solve and ensure that they are making the smart choices. Instead of seeing things clearly and accurately, the ENFJ is likely to have a skewed perspective of what is really going on. They might become paranoid about certain things, and start to doubt their own abilities and sense of intuition. This is why a healthy combination of functions is so important, and when this happens the ENFJ needs to start relying on their dominant function once again. Their extraverted feeling is what connects them to the world around them, as well as gives the ENFJ a sense of meaningful purpose.