Can You Keep Your Cool, According to Your Personality Type 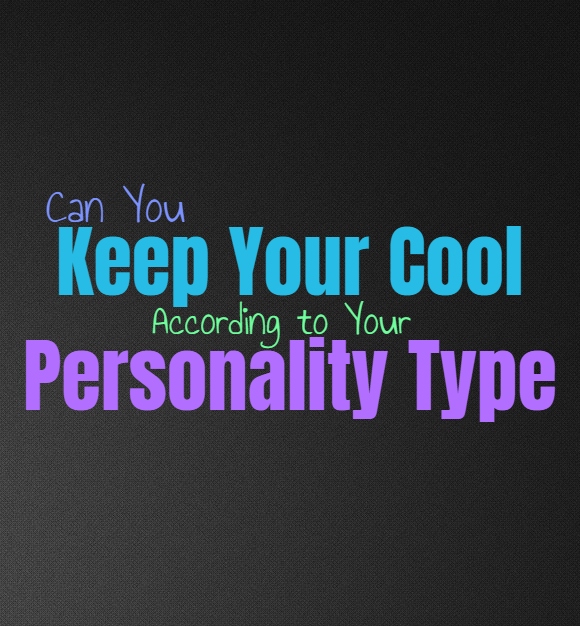 Can You Keep Your Cool, According to Your Personality Type

Some people are much more capable of keeping their cool under stress, or simply when someone is pushing their buttons. These people can show restraint and keep themselves from blowing up, even when they want to. Here is how good you are at keeping your cool, based on your personality type.

INFJs do their best to keep calm when things become heightened, and they are often capable of this up to a certain point. They try to control themselves and their feelings, not wanting to be someone who snaps or expresses themselves in an over the top manner. INFJs keep to themselves a lot, and don’t really like being vulnerable or exposed. When it comes to keeping their cool, they try their best to maintain this, but eventually there are things which will push them over the edge. Often the INFJ will keep cool by bottling up their frustrations, until someone pushes their buttons far too much.

ENFJs do their best to keep it together and remain cool even when things are stressful. They don’t like being someone who is seen as short-tempered or impatient, and so they try to keep calm. ENFJs are perfectionists and so how others perceive them is important to them and so they don’t want to be seen as someone who will lose their cool. ENFJs do however find themselves overwhelmed and stressed with how much they take on themselves. When someone keeps pushing their buttons it is highly likely that they will lose this cool.

For the INFP keeping their cool entirely depends on their mood and how they feel about the situation. They really don’t feel this need to be constantly restrained, especially if they are truly frustrated about something. If the INFP is being pushed or finds themselves really stressed about a situation, they don’t like forcing themselves to keep their cool. INFPs are often led by their emotions and so they believe in following their hearts and expressing themselves. This is something which helps the INFP process these feelings and move forward, but it might make it seem like they don’t really keep their cool most of the time.

ENFPs do believe in remaining positive most of the time, and don’t like to appear to be stressed out. When the ENFP feels overwhelmed they often want to be alone so that they can process these feelings. They do their best to keep their cool in most situations, wanting people to recognize how well they can go with the flow of things. ENFPs do find themselves losing their cool when someone continues to push their buttons though, especially when this person is doing this in a way which keeps them from really doing their own thing.

INTJs are often good at keeping their cool on surface and not really showing their feelings to others. Most of the time the INTJ seems to be rather calm and not too worked up by things. Even when the INTJ is processing so much and has a lot on their minds, they don’t really show this outwardly. They also believe in approaching things from a logical point of view, and so this helps them to maintain their cool and find ways to problem solve when something goes wrong.

While ENTJs do believe in approaching things from a logical stance and really want to work to problem solve, there are times when they don’t really keep their cool. ENTJs can be somewhat high-energy and aggressive people, especially when they want to get something done. This focus on working hard and being efficient, definitely puts a lot of pressure onto the ENTJ. They can be a bit high-strung because of this, and so they don’t always appear to keep their cool, even though they will find a way to overcome their situation.

INTPs are often good at keeping their cool on the surface, since they keep their emotions to themselves. INTPs don’t outwardly express how they are feeling most of the time, even if they try to it can become difficult. Most of the time the INTP seems to keep their cool outwardly, and don’t really show when they are stressed or overwhelmed all that easily. There are times when the INTP does feel pushed over the edge and so in these instances they will definitely seem much less coo.

ENTPs are often good at keeping their cool when they want to, since they don’t really show their inner emotions easily. ENTPs can seem a bit scattered at times, but they often have a way of keeping cool when things are stressful or when there is a problem which needs to be solved. ENTPs try to use logic in order to get things done, and don’t want to allow emotions to cloud their focus or judgement. ENTPs do often appear to keep their cool, even in situations where they might feel stressed on the inside.

ISTJs are often capable of keeping their cool in most situations, since they focus on problem solving and getting things done. They don’t want to allow emotions to prevent them from getting the job done and being efficient. ISTJs do have moments when someone can push their buttons a bit too much and this makes it challenging for them to really keep their cool. They are more likely to lose this sense of calm when a person is pushing them too far, rather than a situation simply not going as expected.

ESTJs are good at problem solving and being efficient people, but that doesn’t mean they are always good at keeping their cool. They can be somewhat high-strung people, especially when they are focused on getting something done. ESTJs don’t like just sitting back and trusting that things will work out, instead they believe in taking matters into their own hands. ESTJs work hard to get things done and don’t want anything to stand in their way. Because of this sense of focus and drive, they don’t always seem to keep their cool on the surface.

ISFJs can sometimes struggle to keep their cool, since they naturally worry about a lot all at once. ISFJs care about taking care of their loved ones, and also want to be able to accomplish their tasks and goals without making mistakes. They put so much pressure on themselves to get things done the right way and to please those around them, and so it becomes difficult for the ISFJ to really keep their cool or remain calm when they are taking on so much.

ESFJs might have a hard time keeping their cool in some situations, especially when they are feeling overwhelmed. ESFJs often have a lot of things they take on themselves, and they worry about being able to take care of their loved ones. They put a lot of pressure on themselves and because of this they can seem a bit high-strung at times. ESFJs might seem a bit stressed and struggle to keep their cool, but they ultimately get things done regardless.

ISTPs actually are good at keeping their cool, at least on the outside. They don’t want to let things stress them out too much, especially when it is something they cannot change. ISTPs enjoy being able to live in the moment and do the things which excite and inspire them. For the ISTP getting worked up and losing their cool over unnecessary stress, seems like a foolish choice.

ESTPs often try their best to keep their cool in most situations and want to appear like someone who can just go with the flow. Most of the time ESTPs certainly can keep their cool, especially when they feel confident that they can handle the situation. There are some instances when they put too much pressure on themselves to achieve their goals, and in those instances it does cause them to lose their cool just a bit.

ISFP
ISFPs don’t like to become too stressed or overwhelmed by things which don’t matter to them. They certainly try to keep their cool in most situations, wanting to just enjoy the moment. As long as the ISFP has people around them who support their choices and love them regardless of mistakes, they will feel much more capable of keeping their cool. ISFPs are often relaxed people who want to just enjoy living in the present.

ESFPs are often capable of keeping their cool in most situations, and they are good at living in the moment. They want to seek out the things which excite them, and simply want to allow themselves to be happy and positive. For the ESFP losing their cool over something is only going to bring down their mood, and so they try hard to avoid this. ESFPs want to be around people who make them happy and keep them positive, so they don’t lose their cool.