ESTJ In Bed: What the ESTJs Sexual Energy is Like 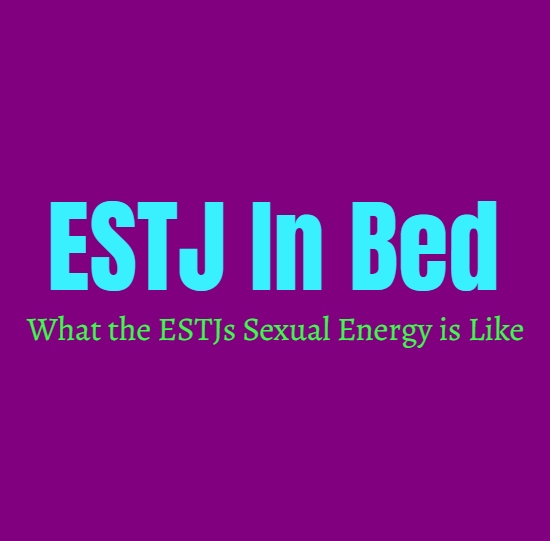 ESTJ In Bed: What the ESTJs Sexual Energy is Like

ESTJs can be both private and open when it comes to sex, as it entirely depends on the person they are communicating with. They often believe that certain things should be kept private from outsiders, but this is only because they don’t feel like sharing not because they are nervous or ashamed of it. ESTJs just like to keep certain parts of themselves for those who they trust and value most in the world. When it comes to sex ESTJs can have a somewhat intense and focused energy, especially when they are with a partner who they care for. They are not afraid of expressing what they want or of going after the person they want most. When it comes to sex ESTJs can be rather direct, and enjoy having more open communication with their partner because of this.

ESTJs are aggressive people when it comes to their daily lives, and this can be something which translates into their sexual energy. They are not afraid of going after or asking for what they want, and they want to have a partner who is this way as well. They might not be interested in trying a lot of new things in the bedroom, unless they have a partner who expresses this desire. They are very focused on the individual and in making them feel satisfied and pleased with the experience. ESTJs can be very focused on the physical aspect, wanting to be able to perform in a way which makes their partner truly happy. They do value having someone who can communicate and be open with them about what they want and if they are enjoying themselves. ESTJs are not afraid of taking charge and might actually prefer things this way. They do want to be able to enjoy themselves but they also become very focused on making their partner happy as well. For the ESTJ it can certainly about soaking up the physical aspects of sex, but they also want to feel connected to their partner. Sex is different for them depending on who they are with and how they feel about that person.

ESTJs can treat sex similarly to how they do most things in life, which is to take it on as a challenge. They strive to be the best at everything they do and when it comes to sex they often want to find ways of improving and impressing their partner. For the ESTJ it can feel like they have failed if they do not live up to certain sexual expectations, and so they want to find ways of improving and becoming better. In some instances this can put a lot of pressure on the ESTJ, but they rarely mind the challenge. They enjoy being able to improve and find new ways to make their partner happy and completely satisfied in their sexual relationship. The high standards which the ESTJ sets for themselves can certainly translate into their sexual energy as well.

ESTJs can definitely view sex as a means of growing closer to someone they love, especially when they are in a committed relationship. They might not always be great at expressing their feelings in an emotional way, even when they do care about someone a lot. For the ESTJ expressing those feelings verbally and emotionally can really be a challenge, but they want to be able to make their partner happy. When it comes to sexual intimacy the ESTJ can often find this to be a great way to really show how much they care about their partner. Being physically close and connected with them and being able to share their bodies, can help the ESTJ feel closer to that person. They are practical people and so they place a certain importance on things like sex in a relationship. They want to be able to check all of the important boxes for their partner, and providing for them is truly vital in their mind. Sex is something which they believe to be an important part of providing for their partner.

ESTJs might be okay with casual sex when they are younger and still searching for the person they want to share their lives with. They can certainly get caught up in the things which feel good, especially if being someone who can participate in casual sex looks good from an outside view. ESTJs can sometimes play into certain roles and want to be someone who can impress others, and so casual sex can sometimes be part of this. For the ESTJ it won’t be as rewarding as sharing this with someone they love, but that doesn’t mean they want to miss out until they find that person. They might even view it as practice and a means of improving their skills for the right person in the future. ESTJs can look at things from a more logical and factual point of view, rather than allowing emotions to affect their judgment. They can see sex as something which is good for them, something which they need and isn’t always about making a connection. That doesn’t mean they don’t want to be with someone special and once they find that person sex becomes something they take very seriously.