Do You Find it Hard to Stay Angry, Based on Your Personality Type 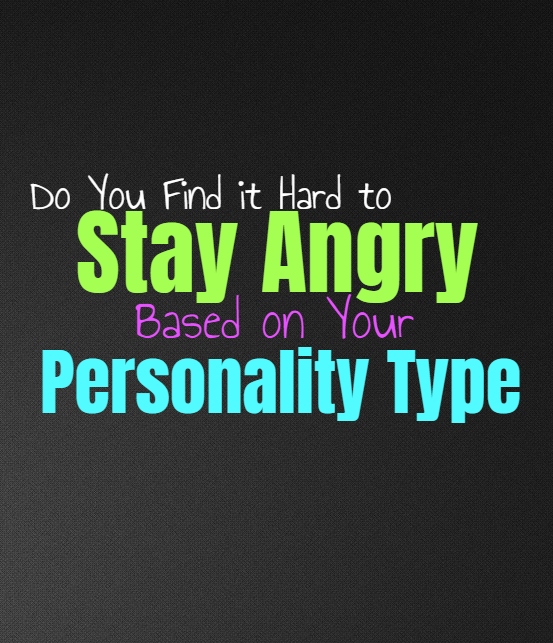 Do You Find it Hard to Stay Angry, Based on Your Personality Type

For some people it is difficult to truly stay angry for a long time, especially with the smaller transgressions. For others staying angry is natural and easy, and they find themselves holding grudges over smaller details. Here is how easily you can stay angry at others, based on your personality type.

INFJs don’t find it difficult to stay angry most of the time, since they have a tendency to hold onto these feelings. INFJs can holding grudges for a long time if they are truly mad about something. They have a hard time finding ways to let go when they feel like they are justified in this anger. INFJs do have certain people who they might struggle to really remain angry with, but this is because they feel a close bond to them and don’t want to feel a sense of distance because of their anger.

ENFJs can actually hold a grudge for a long time, so staying angry isn’t that difficult to them. When it comes to certain people who they are closely connected to they can find it a bit harder to remain angry for a long time. ENFJs are often highly passionate people and so when they experience an emotion it often runs deep. Because of this they do have times when they can remain angry for a while, simply because it is hard for them to really shake this emotion.

INFPs can certainly remain angry for a long period of time, especially when they feel justified in this anger. When there is something which is deeply bothering them, they have a hard time really shaking these emotions. INFPs are connected to their inner emotions, and they don’t like simply ignoring them. When they are angry with someone they might struggle to let this go for a while, at least until they feel like it has been sincerely resolved.

ENFPs can certainly remain angry with someone if they were sincerely angry to begin with. They often prefer to remain focused on more positive emotions and don’t want to allow things to weigh them down. ENFPs don’t like fighting or remaining angry and so they often shake this intentionally. If they were deeply upset with someone for more serious reasons, then it becomes something they hold onto for a long time and don’t find it difficult to stay angry at all.

INTJs can stay angry for a while and don’t find it all that challenging to do so. When they are mad at someone for valid reasons, then they don’t believe in just letting this go. For the INTJ this is often a more conscious choice and something they feel should be remembered. When someone has slighted them, then they don’t want to just let this person back into their lives.

ENTJs can certainly remain angry, especially when they have valid reasons for this. When someone has done something to make them angry they can hold onto this if they feel they should. When someone they love makes a mistake however, ENTJs don’t like holding onto this anger. They are also very capable of letting go and moving on from the situation, they just want to be sure that is the right choice to make.

INTPs don’t want to hold onto their anger most of the time, but they certainly don’t find it difficult to remain angry. If the INTP is truly frustrated about something, they might find it easier to hold onto this rather than let it go. When it comes to small transgressions they often try to bury these feelings, but essentially they aren’t really letting go of them. INTPs can stay angry easily because they don’t always face their emotions in order to really process them.

ENTPs don’t like staying angry and most of the time they prefer to let go of these feelings. At the same time they are capable of holding a grudge when they truly become upset about something. ENTPs find it easy to remain angry if this is something they choose to do, but most of the time they would rather focus on living their own lives. They don’t like allowing these feelings to hold them back and would rather try and let it go.

ISTJs don’t find it difficult to stay angry when they feel justified in their anger. They try to focus on practical things and when something isn’t serious they are willing to move on and forgive. When the ISTJ is truly slighted by someone then remaining angry is easy and something they can hold onto for a very long time, or even forever. They don’t want to let these people back into their lives if they feel like it isn’t the smart choice, and so they can remain angry with them.

ESTJs don’t like to remain angry but that doesn’t mean it is challenging for them. They can easily stay mad at someone when they feel like they are justified in this anger. ESTJs don’t want to forgive someone if it feels like that person is undeserving and will only take advantage again. They want to be practical in their choices and only want loyal people in their lives. They can forgive when something isn’t a big deal, but can easily stay angry if it is.

ISFJs might find it challenging to stay angry with the people they love and care for. They have a hard time really holding onto these negative emotions, since they are people-pleasers. ISFJs want to make others happy and so they try to avoid behaving in a way which might upset them. If the ISFJ is angry with someone they want to find ways to resolve this, but if that person acts sweetly it can be difficult for them to really hold onto this anger for long.

ESFJs can struggle to stay angry when it comes to smaller slights, or if someone knows how to play into their sense of empathy. ESFJs care about their loved ones and really just want to do whatever they can to make them happy. If they are angry with someone they can find it hard to really hold onto this anger for long. They find it especially hard if that person knows how to make them feel guilty for this, or knows how to be sweet and make them really forget why they were angry.

ISTPs don’t like holding onto emotions which can simply hold them back from experiencing life. They live more in the present and because of this they don’t usually stay angry. ISTPs can move on from things, unless they have a valid and logical reason to remain angry. They would often rather be around people who don’t create this type of response, but for the ISTP it is best not to stay angry with someone when they can easily move on and enjoy the present.

ESTPs like to live their lives in the present moment and so they don’t always find it easy to stay angry with someone they are currently connected to. ESTPs do however remain angry with someone if they have felt deeply betrayed by them, and have cut this person from their lives. They live more in the present but this doesn’t make them incapable of remaining angry when they are holding a grudge towards someone.

ISFPs try not to stay angry and most of the time they are good at this. For them it is better to focus on the positive things in life and to live in the present moment. They don’t want to stay angry at someone when this can only lead to them feeling unhappy themselves. They would rather find ways of moving forward and of letting go of the past.

ESFPs don’t really stay angry most of the time, especially towards people they love and are close to. They can forgive their past mistakes and prefer to focus on living in the present moment. ESFPs seek out the things which bring them joy and inspire them, and so staying angry with someone can really only hold them back from experiencing this.