The Ways In Which Each Personality Type Handles Internal Conflict 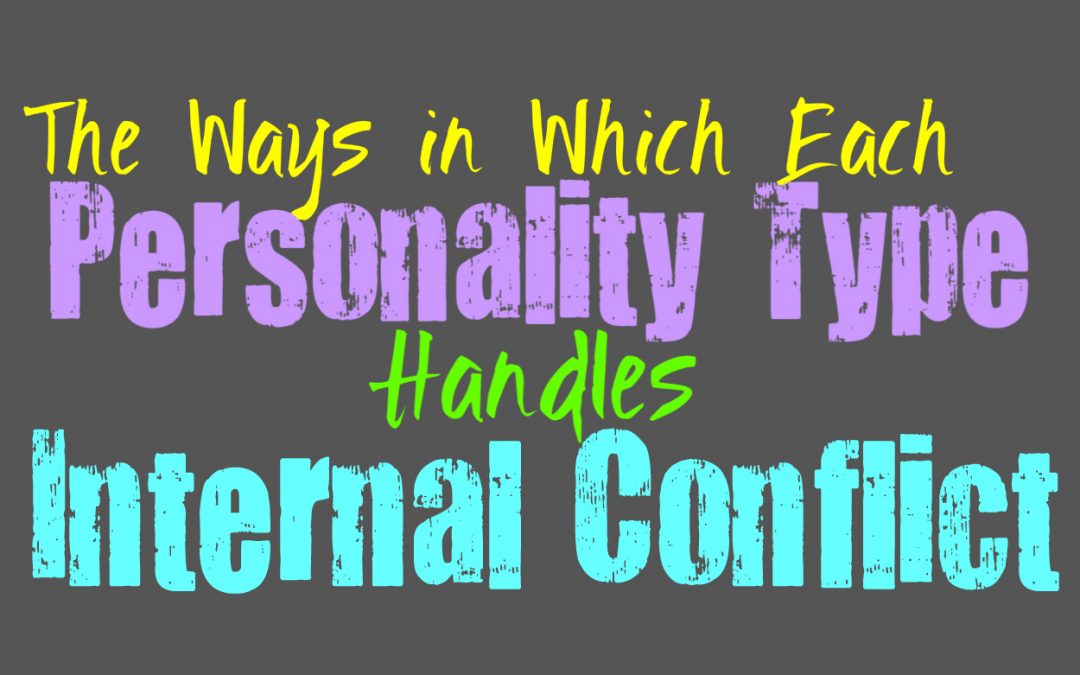 The Ways In Which Each Personality Type Handles Internal Conflict

Everyone encounters some kind of internal conflict in their lives, whether it be a personal struggle or dealing with the battle between heart and head. Here is how you handle internal conflict, based on your personality type.

INFJs often struggle with internal conflict, since they have rather contradicting personalities. The fact that they are drawn to their heart, but yet have a very logical side, puts these two things at constant odds. INFJs are continuously battling between their heart and their head, wondering which path is the right one to follow. Not only are these things battling, INFJs also have such contradicting desires and qualities that they can certainly deal with internal conflicts. INFJs simply find a way to process these conflicts by moving forward, although it can be a constant challenge for them.

ENFJs often deal with their internal conflicts by trudging forward, and trying not to let it hold them back. ENFJs do deal with internal conflicts, especially when it comes to their heart and their heads. At the same time ENFJs can struggle to deal with the conflicting emotions of others, as well as their own internal morals. For them it is often better to just move forward, instead of allowing these conflicts to hold them back from getting things done. ENFJs can sometimes bury their own emotions, especially if it feels like they might jeopardize the happiness of their loved ones.

INFPs often deal with internal conflict by trying to work through and understand their emotions. They don’t like ignoring their feelings or thoughts, instead they want to take the time to process it. For the INFP it is important to acknowledge their feelings, even the ones that force them to face an internal conflict. When they are struggling with a moral decision or some sort of inside confusion, they want to take time to themselves to figure out what they need to do to. INFPs often have a strong moral compass, which helps the work through these things and come to the right choice.

ENFPs often try to process their emotions in a very internal and personal way. When they are dealing with a conflict they often try to figure out what the right choice is for them. ENFPs might not express this in a way that others can easily observe, but they believe it is important to experience their own feelings. They will often try to battle this internal conflict by filtering it through their sense of morals, since this can help them make the choice that is best for them.

When the INTJ is faced with an internal conflict that isn’t based on logic or facts, they can often struggle to deal with this. Having to handle an emotional conflict is a bit draining for them, and might get ignored. They don’t really enjoy having to deal with their emotions, unless there is a way for them to reason these feelings away. INTJs usually try to come up with the most efficient and logical way to solve their problems, and so internal conflicts can often go unanswered and neglected.

ENTJs can struggle to really deal with internal conflicts, especially ones that focus on emotions. They do have their own set of morals and beliefs, but these often focus on things that have easier answers for them. ENTJs have a hard time processing their feelings, and so often they will push them aside. When they are struggling with an internal conflict, they might even try to logic them away. ENTJs apply facts and efficiency to their choices, but this can cause them to neglect their feelings.

INTPs often struggle with internal conflicts, but they try their best to process them. They have a hard time understanding their own emotions and so sometimes they just want to push them aside. If there is a conflict between their head and their morals, INTPs will likely spend time analyzing the situation. They search for answers and often try to spend time finding a way to solve whatever problem is in front of them. While INTPs can struggle to process their emotions they try their best to figure out how to come up with a logical answer for what is happening.

ENTPs can sometimes deal with internal conflicts, especially between their heads and their hearts. While ENTPs are highly logical people there is a deeper part of them that can be focused on their hearts. They go with what feels right sometimes, even when it can be a bit chaotic and even illogical. ENTPs always know the logical and factual answer, but that doesn’t mean it will be the most rewarding one for them. So sometimes battling between these two decisions can be a bit confusing for them.

ISTJs often try to process their internal conflicts by coming up with the most logical and efficient solutions. They are problem solvers by nature, but they don’t focus much on their inner emotions. They have strong inner morals though, and they will find a way to process their conflicts through their sense of right and wrong. ISTJs often ignore their true emotions though, and don’t like having to focus on their feelings instead of what is practical.

ESTJs are likely to neglect their internal conflicts, and focus on doing what is more practical. They believe in following the facts and doing the most logical and efficient thing in any given situation. ESTJs don’t like having to process their emotions and analyze them, instead they prefer to ignore these types of conflicts. When their feelings to find a way to push themselves to the surface, having to deal with this inner conflict can be difficult for the ESTJ and will likely take time.

ISFJs can have a hard time processing inner conflicts, especially when they feel like it is being selfish. Sometimes they will neglect their own needs and emotions in order to provide for their loved ones. ISFJs focus on moving forward and doing what they can to provide for those around them. They do have strong beliefs and morals, but often they can conflict with the needs of those around them. The biggest struggle for the ISFJ it battling their own feelings with the feelings of the ones they love.

ESFJs are often faced with internal conflicts, and they do their best to find a way to process them. For the ESFJ the biggest conflict is between the needs of their loved ones and their own needs. Having to figure out which choices to make in these situations can be truly difficult for them. ESFJs often push aside their own emotions in order to make their loved ones happy. While this conflict usually has a common winner, it can still be rather difficult for them to handle.

ISTPs often process things through their inner minds, and utilize logic as a means of getting things done. Instead of focusing on their emotions the ISTP prefers to focus on the facts of a situation. This can make for some interesting internal conflicts, since they have a hard time coping when their feelings are pushing themselves to the surface. It can also be challenging when the ISTP is dealing with the needs of their loved ones, against what makes the most logical sense.

ESTPs often process internal conflicts by either overanalyzing them or pushing them aside completely. They prefer to focus on doing things that are logical and practical. They don’t like being held back by emotions, but this is often easier said than done. They care about their loved ones and so sometimes this can cause an inner conflict for the ESTP. They do their best to focus on what feels right in the moment, and often this is how they handle their conflicts.

ISFPs often handle their inner conflicts by processing their feelings and dealing with them. They don’t like ignoring these emotions, instead they believe it is truly important to focus on them and understand them. ISFPs are good at handling internal conflict and won’t just simply neglect them. For them it is important to do what feels right and honest, and so they take all the time they need in order to follow the right path.

For ESFPs inner conflicts are something they often do their best to process and understand. Their emotions are important to them, so they do their best to follow the path that feels right. ESFPs live in the moment and don’t like allowing things to drag them down. They often process these conflicts by following their hearts and doing what they feel most inspires by.