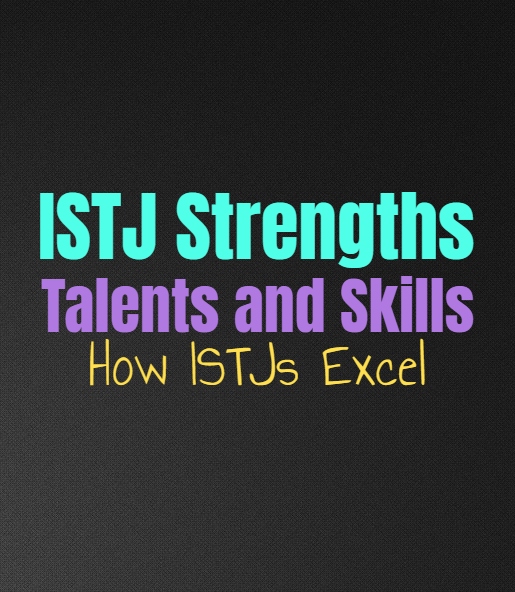 While everyone possesses skills which are unique to that individual, personality types often have their own set of natural strengths. It can be helpful to recognize what these natural talents are, in order to help people find out where they will most excel in life. With these strengths there are certain environments which are going to be more conducive to success and will also help you feel more confident in yourself and your natural abilities. Knowing where these strengths are, can help people understand themselves better and recognize where they can improve as well. ISTJs have plenty of natural strengths and skills, and these abilities help them to advance and fit into many different situations with ease.

ISTJs are determined people, and because of this they don’t really believe in giving up. When they set their minds to something they don’t believe in allowing anything to hold them back. They will push themselves and find whatever means possible of improving. ISTJs simply want to be capable of achieving anything and they don’t want to let the people around them down. For the ISTJ failure just is not an option and so this inner strength and determination is what helps them push past the barriers that many people back down from. Giving up feels like a complete and total failure and is not a choice that the ISTJ feels comfortable accepting.

The fact that they are such determined people helps the ISTJ to overcome so many obstacles in life. This is one of the things which lends a hand to their success, and makes it easy for the ISTJ to progress in just about anything they do. Once they set their minds to something they will research and work hard in order to make it happen. When they find a career they are happy with the ISTJs won’t simply accept stagnancy, instead they want to continue to grow and move up the ladder. Not only are these things that the ISTJ wants, but they are more than capable of accomplishing those desires. They use their practical minds and determination in order to make things happen without allowing doubts or fears to hold them back. They are not afraid of the challenge, they just want to take the time to prepare and figure out how to overcome it.

ISTJs are also naturally goal-oriented people, who believe in planning things out and sticking to their schedules. Where other people might struggle to keep schedules and show up to things on time, the ISTJ is naturally capable of this. Their minds are wired to keep everything organized and to set schedules with their lives. This is part of why the ISTJ is so goal-oriented and believes in making plans for their future and the futures of the people they love. ISTJs are not afraid of sticking to things and making solid commitments, especially with the important choices they need to make. Not only does this make them accomplished individuals, it also helps them when it comes to relationships and standing by the people they care for most.

ISTJs are often rather decisive people and once they make a choice about something they stick by this. ISTJs are decisive because they spend a lot of time researching and making sure they are confident in what they know and believe in. This helps them when it comes to following through and standing by their word, since they don’t express what they want until they are absolutely sure of it. Where other people might doubt themselves and the things they fight for, ISTJs do not have these doubts because they know what they truly want from life.

Where some people might struggle with adapting to something they have dealt with before, the ISTJ can often fit into most situations rather well. It might take them some time to research and prepare in order to really adapt fully, but they are certainly capable of doing this. They are often considered a jack of all trades, since have are capable of handling so many things. ISTJs have minds which can often pick up on information and learn about it, even if it is something they wouldn’t normally be drawn to. Some might see them are hard-working and stuffy people, but this is because they don’t truly know them. ISTJs just don’t express their emotions outwardly and easily, but in truth they are impressively capable of learning just about anything. Where some people are only made for certain careers or tasks, the ISTJs can fit into most things given the time to learn and research the subject at hand.

ISTJs also have their own unique sense of humor, which people might be surprised by once they get to know them. They are often somewhat dry and sarcastic with their delivery, so not everyone is capable of picking up on their joking nature. ISTJs have so many sides to them and so many natural strengths, and because of this certain ones might go unnoticed from the outside view. It takes time to get to know the many layers and talents of the ISTJ personality.

Not Afraid of Honesty

ISTJs are not afraid of being honest and completely upfront with people, as this comes more naturally for them. While some might prefer to avoid discord or discomfort, the ISTJ prefers to be honest with those around them. When they are in a situation where they feel like they need to express their honest opinion, then the ISTJ will do this openly. This is part of what makes them such loyal people when it comes to relationships, because they don’t believe in doing anything behind someone’s back. They prefer to be honest and tell things as they see them, rather than trying to spin webs of lies and deceit. ISTJs want to be upfront about what they do, and have a strong sense of loyalty and integriy.