Are You Good at Long-Term Planning, According to Your Personality Type 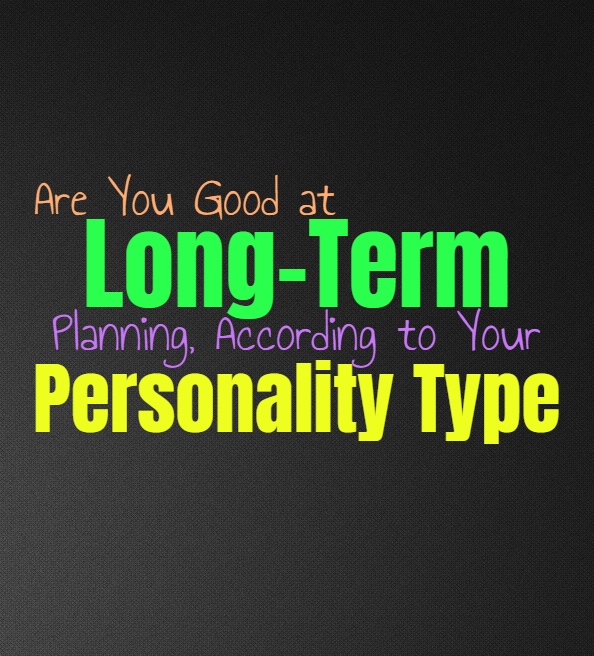 Are You Good at Long-Term Planning, According to Your Personality Type

For some people it is difficult to really plan for the long-term, since they prefer to focus on the here and now. For others long-term planning is a truly important part of their lives, and necessary for them to maintain peace of mind. Here is how good you are at long-term planning, based on your personality type.

INFJs do believe in long-term goals and planning, and so they are often focused on the future. They don’t like feeling as if they are just leaving things up to chance, and so they do think about the long-term often. Sometimes this can be a point of contention for the INFJ though, especially when they look into the future and feel afraid of what they see. Sometimes they can overthink the situation, and have doubts in their ability to accomplish the long-term goals which they want for themselves and their loved ones.

ENFJs are definitely long-term planners, and they enjoy being able to prepare for the future. They are much more focused on the long-term than they are the present, and care about building towards the things they want. ENFJs spend a lot of time planning and thinking about the future, and the goals they want to accomplish. For them long-term planning is truly important, or else they start to feel stagnant and a bit trapped. They want to know that they can work towards the things they want for themselves and their loved ones.

INFPs aren’t really obsessed about long-term planning, but they do think about the future often. They are more likely to envision and imagine the future in many different possible scenarios and outcomes. While INFPs do care about the future very much, having to plan it out in detail feels a bit draining for them. They will likely have certain goals and things they want to achieve, but that doesn’t mean they feel the need to plan out their approach and every detail of how they are going to achieve these goals.

ENFPs do care about the future and often have many long-term goals and thoughts. While ENFPs care about the future and think of it often, this doesn’t mean they are obsessed with planning it all out. For them planning every detail can be draining and extremely boring. They would rather approach things their own way, analyzing and considering the many different paths they could potential take. Sometimes ENFPs like to change their minds, and so having everything planned out just isn’t rewarding for them.

INTJs are definitely long-term planners, especially when it comes to their future goals. They believe in setting these goals and working to figure out the best ways to achieve them. For the INTJ long-term planning is important and responsible. They often find it foolish how some people just want to move forward with their lives without actually thinking about the future and how to best achieve their goals and desires in life. INTJs are aware that in order to get what they want and become who they want to be, they need to plan things out for the long-term.

ENTJs are definitely long-term planners, since they believe in preparing for the future. They don’t like leaving things up to chance, and would much rather be sure that they can achieve their goals. ENTJs focus on the future and think about the best ways to get what they want from life. For them it is important to always be efficient and so this means planning for the long-term and being ready for what is to come. They don’t like simply stepping back and letting things happen, and prefer to take charge of the situation.

INTPs definitely think about the future and try to consider different angles and possible outcomes. They will likely spend a lot of time analyzing the future and how they can achieve the things they want from life. While INTPs definitely think about the future and which path they should take, they aren’t necessarily planners. They won’t plan out every tiny detail, instead they prefer to consider different potential paths they can take and might not actually decide until the last minute.

ENTPs do like to think about the future and analyze different potential outcomes and paths they could take. While ENTPs think about the future often, they don’t spend a lot time sitting down and just planning it all out. For them this can feel a bit too restricting, since they want to feel free to change their minds and ultimately change their plans. They might consider a path they want to take, and decide last minute that they would rather go for something else instead.

ISTJs are great at long-term planning and often believe in being prepared for things. They care about the future and want to be sure that they are read for what is to come. They work hard to plan for things so that they can navigate them with a sense of confidence and efficiency. ISTJs don’t want to make mistakes and so planning is the best way they can be sure they will get the job done the right way.

ESTJs are definitely long-term planners, who believe in being prepared for anything. They want to be able to plan for their future so that they can execute things properly when the time comes. They care about their goals and want to do whatever it takes to accomplish them. For the ESTJ it is important to plan things out, especially when it comes to looking towards the future and their long-term goals. For them it is valuable to be ready for things and so this means planning for the long-term.

ISFJs are long-term planners, especially when it comes to accomplishing their goals and caring for their loved ones. They care about the future and want to be sure they are prepared for things. ISFJs don’t like walking into the unknown without some sort of preparation, and so they do believe it is important to plan for the long-term. There are times when they might struggle to see too far ahead, but they do what they must to navigate things and be ready.

ESFJs are long-term planners to some extent, since they believe in being prepared for things. They don’t want to make the mistake of not planning far enough ahead, and so they try to do what they can to ready themselves. They do plan ahead but maybe not as far as some other times, since they don’t always have the ability to see way into the future. ESFJ plan for the goals they want to accomplish, but they often take this in chunks of time rather than planning out every single detail of the rest of their lives.

ISTPs aren’t really focused on planning for the long-term, since they are more focused on the present. This doesn’t mean they are incapable of thinking about the future, they just don’t like planning every detail. They would rather approach their goals one step at a time, and take it from there. ISTPs don’t like spending too much time plannings things out, since this often feels a bit pointless and even draining for them.

ESTPs don’t spend too much time planning for the long-term, instead they like to focus on the present. They do believe in working towards the future they want, but not by planning everything out perfectly. ESTPs go after their goals in the present and simply want to build on that. They are focus on living in the moment and for them having to plan everything out in detail can be rather draining. Because of their desire to focus on the here and now, ESTPs just aren’t long-term planners in the conventional sense.

ISFPs don’t like having to plan for the long-term, instead they want to focus on enjoying the moment. For them it can become draining to have to plan things out, and so they would rather enjoy how things are. They are not incapable of thinking about the future, they just don’t want to plan for it. For the ISFP having to plan things out can be a bit exhausting, and leaves them feeling restricted to follow this specific path.

ESFPs aren’t really long-term planners, since they prefer not to have things so set in stone. They will think about the future and the goals they want to achieve, but they don’t like looking to far down the road. For ESFPs it is more rewarding to reach for the goals in front of them, than to obsess over planning for the long-term. They are simply more focused on living in the present and enjoying what they have, rather than planning things out.