INFP Myths, Stereotypes & Misconceptions: Cliches and Tropes That Are Inaccurate 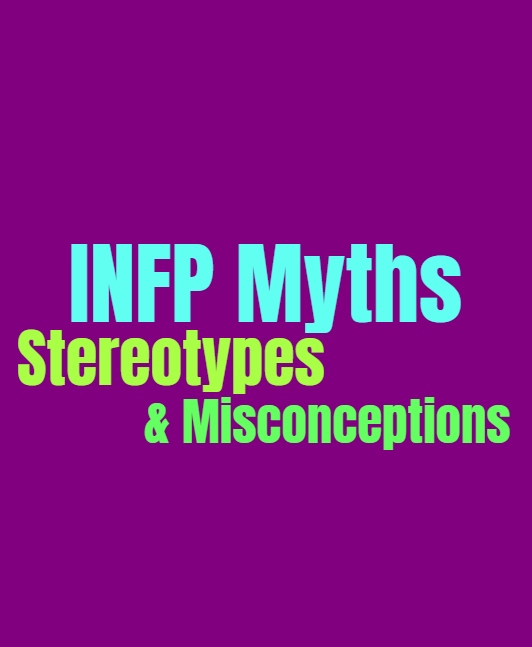 INFP Myths, Stereotypes & Misconceptions: Cliches and Tropes That Are Inaccurate

There are always stereotypes and common misconceptions when it comes to personality types. While these can seem like no big deal, they can be more harmful than people realize. Simply attaching some sort of stereotype to these personality types and having people believe them, isn’t useful or helpful in understanding one another. The point of understanding the types is to be able to gain a deeper insight into someone, not create preconceived notions which will leave us distant from these people. It is vital that we completely remove these misconceptions, and instead approach each personality type with a more open mind, and overall more accurate information. Personalities are not attached to being a good or bad person, these are just tools in understanding how people process the world around them, and how they respond to information.

The Stereotypes of the INFP

INTPs often have many stereotypes attached to them, but the most harmful one is that they are irrational and emotional people. This comes from the fact that INFPs are certainly connected to their inner emotions, but the myth is that they are incapable of handling these inner feelings. The INFP is labelled as illogical and incapable of seeing the facts of a situation. They are seen as people who will express their emotions so aggressively that they cannot be convinced of anything else. Someone who will cry at the drop of a hat, and constantly seems to be a blubbering mess around others. These types of misconceptions are deeply harmful to the INFP, making them appear like something they are not. This can cause people to avoid INFPs, or avoid being sincere with them for fear that they might overreact. Just because INFPs are expressive people who care about emotions, does not make them messes who cannot seem to keep it together long enough to function.

INFPs can also be seen as fragile people, constantly on the verge of some sort of breakdown. People view them as these overly emotional individuals, constantly on edge and ready to break. This is something which comes from people who have seen INFPs in some sort of crisis, or people who simply cannot personally understand someone who is capable of expressing themselves freely. They peg the INFP as emotions messes, simply because they are personally incapable of connected to their own emotions. We sometimes fear what we do not understand, and this is often where these misconceptions and stereotypes arise from.

INFPs might be ruled by their inner emotions as their dominant function, but that doesn’t make them incapable of seeing logic or reason. Most INFPs love to do research and enjoy learning about new subjects. They can see facts and truth just as easily as someone who focuses solely on logic, they just don’t always let these things rule their decisions. INFPs care about their inner morals, which is what is truly connected to their Fi (introverted feeling). They strive to do the right thing and follow these morals through life, and there is nothing wrong with that. This is what makes the INFP so considerate of others, but also makes them strive to make a difference in the world. These traits do not hinder the INFP, instead it can be exactly what makes them so motivated to do something good with their lives. Not all INFPs have the same inner motivation, as this really isn’t something only attributed to personality type. But the INFP who do use their natural abilities for something good and useful, can be some of the most focused and helpful people in history.

These inner emotions don’t make the INFP a constant mess, instead it makes them capable of understanding themselves better. Their emotions can certainly be difficult for the INFP at times, since they feel things very deeply. As the INFP matures they can often learn to understand the best ways to process these feelings and use them for positive outcomes. They become confident in themselves and who they are, knowing what they believe in without fail. This helps the INFP become firm in their convictions and capable of really making a difference in the world around them. They don’t constantly lack motivation like some might believe, instead INFPs just need to find the right things which inspire them. When they are inspired the INFP can be go-getters, constantly moving forward and excited about the world around them.

INFPs can actually be rather strong people, since they spend time diving into their own feelings and working to understand them better. Instead of bottling these things up and allowing them to fester over time, the INFP needs to process them. This actually helps the INFP become better at moving on, since they don’t simply push aside their feelings. Burying emotions does not make people stronger, it often makes them more fragile in the long term. Instead INFPs who spend time working on themselves will often mature into very strong people, capable of handling whatever comes their way. This is because they are used to feeling things deeply, and become comfortable with this reality.

Of course stereotypes are harmful, but sometimes we fall into them anyways. It is important to take a step back and look at the individual, not some preconceived ideas we have about them based on information someone else has handed to us. These cliched or stereotypical ideas can cause us to avoid certain connections, simply because we think it is a bad idea. It can cause people to miss out on relationships and friendships based on some sort of idea about someone which could not be further from the truth.

This can also be internally harmful for INFPs, especially when they constantly read about these stereotypes. It isn’t likely to cause someone to feel a sense of pride about who they are when they are only faced with the negative and insulting views about them. Pegging the INFP as emotions, messy or flighty, is not only inaccurate but can be deeply harmful to their confidence. Causing them to withdraw from those people who see them incorrectly, and possible have doubts about what they are truly capable of. Not only do stereotypes need to stop, but taking the time to truly learn about each person is vital in understanding them better and in actually seeing the truth behind the mask that these labels can ultimately put on us. INFPs are not overly emotional people, instead they are moral and open-minded individuals. Knowing the way they process things and the way they see the world is only one step to understand the person inside.