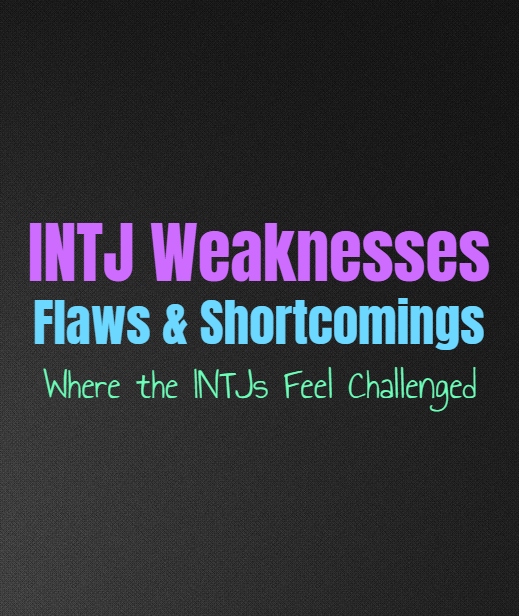 Everyone possesses certain weaknesses which can make some tasks more challenging to perform. While for some people these weaknesses don’t prevent them from being successful in their careers, that doesn’t mean these shortcomings can’t make certain areas of their lives a bit more challenging and uncomfortable. Understanding these weaknesses is an important step towards self-discovery and growth. In order to know where we fit best, we need to learn more about our own inner strengths as well as weaknesses. Diving into those imperfections can sometimes be jarring, since it isn’t the most joyful feeling to learn about the things we could be doing better. It shouldn’t be about comparing yourself to others, instead about knowing more about what comes naturally to each person.

When it comes to knowing their weaknesses the INTJ can sometimes shy away from this, since they don’t want to perceive themselves as having any shortcomings at all. They prefer to focus on pushing ahead even when things become challenging or overwhelming for them. Instead the INTJ wants to overcome anything that stands in their way, even if they might possess certain shortcomings which make it difficult. They don’t believe in making excuses for those things, instead they want to find ways to make things happen without allowing anything to prevent this. In order for the INTJ to grow in the way they want to, they definitely need to learn about their weaknesses as well as their strengths. Taking time to process this information and learn more about themselves is an important step, albeit a challenging one at times.

INTJs are very factual and logical people, because of this focusing on their emotions is not the most comfortable of subjects for them. They would often prefer to focus on things which can be proven and are much more tangible. Emotions seem unclear and flighty to the INTJ, and so they would much rather shy away from them. The fact that they cannot strongly comprehend where these emotions come from all of the time, really makes them feel uneasy focusing on them. INTJs want things to be concrete and believe in finding ways to logically understand everything around them, They might even attempt to make sense of certain emotions, wanting to put logic answers to why someone behaves a certain way. When the INTJ cannot logically understand and emotion they often brush it aside, or attempt to bury it. For them it is best to find ways to solve problems which are logical and practical, rather than emotional.

This lack of emotional understanding can certainly be something which causes the INTJ to struggle in certain areas of their lives. There are times when this can hold them back in relationships, especially when their partner wants to talk about their feelings and share with the INTJ. While they care deeply about the people close to them, the INTJ just doesn’t feel comfortable expressing their inner emotions in an open manner. They often find more practical means of showing that they care, and sometimes this can be challenging in a relationship. The INTJ also might encounter difficulties when their own emotions have been left to fester for so long, as they do often find ways of expressing themselves which can become less than healthy if they are ignored for so long.

INTJs can sometimes lack flexibility, since they don’t like when things are up in the air or unplanned. They prefer to know their next move so that they can prepare for what is to come. When people constantly spring new choices on the INTJ, they find themselves becoming very frustrated. They aren’t always happy about change, especially when they don’t have the proper warning to prepare for it. When things are constantly moving from one thing to the next without a sense of direction or logic, the INTJ becomes rather frustrated with this. This makes them a bit less flexible when it comes to gatherings or being around people who prefer to be spontaneous.

INTJs just feel more comfortable when things can have some sort of structure, since they want to prepare themselves for their next move. This comes from a desire to get things right, rather than making a bunch of mistakes along the way. They believe in being efficient and can become rather annoyed with people who constantly want to change the plans and do things last minute without letting them know what is happening.

They Can Be Critical

Since the INTJ is a perfectionist, this can also cause them to be rather critical of themselves and of others. They judge things rather harshly at times, wanting to be sure that every detail is perfectly executed. While this is something which can be seen as a strength, there are times when it can also be a weakness. The important thing is to find the balance, or else the INTJ can become overly critical and analytical of things around them. They might find themselves only seeing the mistakes and flaws in something, wanting to find ways to make it even better. When it comes to their loved ones this can be upsetting, especially with someone who just wants the INTJ to support them and be proud of their accomplishments.

INTJs are often even more critical of themselves, constantly seeing how they could have done something better. They have rather high standards which can make certain tasks difficult, since they find themselves wanting to constantly improve- never truly feeling like the project is finished to their high standards.

While INTJs do believe in structure and order, they can have a hard time following the orders of someone else. They don’t simply want to listen to someone’s commands because that person is their boss or leader in some ways. INTJs do better when they are their own boss and have their own room to make decisions without needing to constantly answer to someone else. They struggle with following orders and rules which don’t make logical sense, and might find themselves challenging those instructions. This can make certain job positions difficult for the INTJ, since they question everything they hear and want to be sure it is the right choice before moving forward. While this can certainly be a good thing, it can make things challenging for the INTJ at times.