How Easily Do You Get Discouraged, Based on Your Personality Type 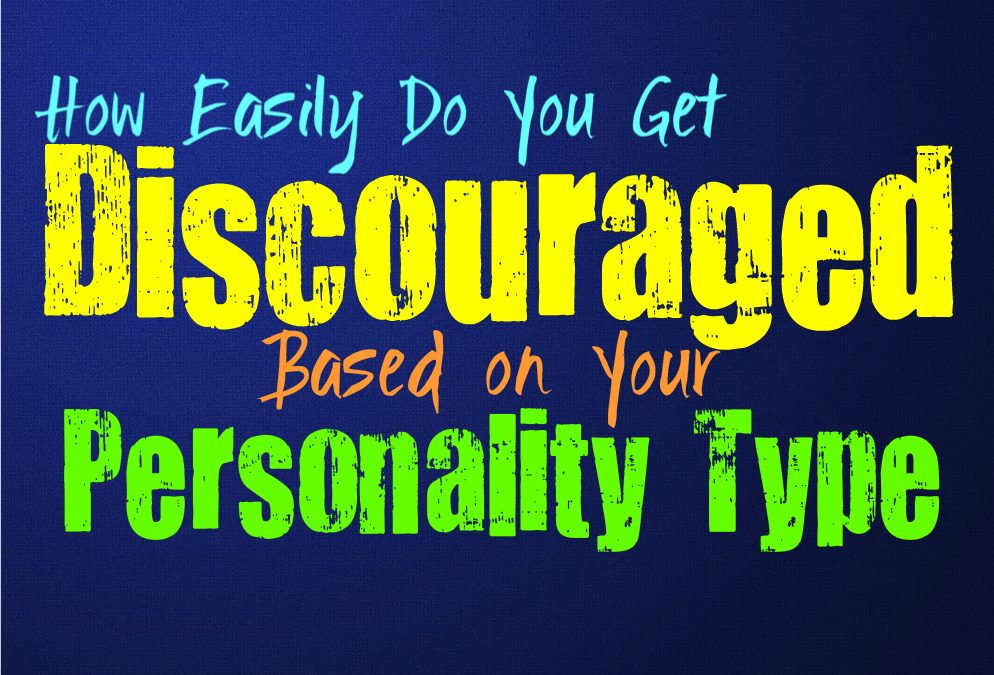 How Easily Do You Get Discouraged, Based on Your Personality Type

For some people a bit of disappointment is something they can cope with and find a way to move forward. For others can be rather easy for them to become discouraged and so they have a hard time handling whatever struggle they are dealing with in life. Here is how easily you get discouraged, based on your personality type.

INFJs often try not to get discouraged when challenges come their way, but these things do add up after a while. When they feel like they have become overwhelmed with negative occurrences, the INFJ will start to find themselves feeling discouraged. For the INFJ it can be difficult to endure constant setbacks without feeling a bit discouraged at some point. They will likely go through a time of needing to vent and will want to shut themselves off from the world for a short time. They just need to recharge in order to get themselves back to moving forward.

ENFJs do their best to overcome their disappointments and not allow it to get them discouraged. They work hard to get things done and don’t want to let anything stand in their way. ENFJs often have many goals and seek to do what they can to provide for the people they love. There might be moments when they become overwhelmed, and during those times they can feel discouraged. For the ENFJ it often takes a lot for them to really become discouraged, and only happens when plenty of negative things seem to keep standing in their way.

INFPs do sometimes get discouraged, especially when they feel like they are struggling to really feel motivated. They can go through times where they are feeling drained and in those moments they will become discouraged somewhat easily. In most situations where the INFP feels this way they will need to retreat a bit and have some time to recharge so that they can back to being themselves again. They also need to be able to reconnect with things that make them feel energizes, since this lack of emotional energy is often what causes them to feel easily discouraged by things that happen to them.

ENFPs try not to let things get them feeling discouraged, they prefer to remain positive. ENFPs don’t want to allow anything to drag them down in life and really don’t like focusing on their negative emotions. For them it is better to focus on positivity and they enjoy trying to put themselves closer to a future which will make them happy. ENFPs don’t like allowing themselves to become discouraged, and so it often takes a lot for them to get to this point.

INTJs don’t easily become discouraged, instead they focus on moving forward. When something goes wrong in their lives they do whatever they need to in order to fix the problem. Instead of allowing things to hold them back, the INTJ works to overcome their struggles and make things better. They approach things from a logical point of view, instead of allowing their emotions to weigh them down and make it difficult to move forward.

ENTJs don’t like allowing things to discourage them, and so they do their best to move forward. They work hard and want to get things done, and for them it is important not to allow themselves to become too discouraged. When something doesn’t go their way the ENTJ just attempts to problem solve and figure out a way to get things done efficiently. There are times when they can feel overwhelmed by their disappointments, but it takes a lot for them to reach a point of really feeling discouraged.

INTPs do sometimes become discouraged, but they often try to keep their emotions out of their decision making. Sometimes their realistic mindset is the exact thing that gets them feeling discouraged, since they can readily see how things can go wrong. INTPs do their best to problem solve and analyze situations in order to find the best approach for them. There are times when the INTP might get caught up inside of their own heads, and overthinking things can lead to some discouraging thoughts.

ENTPs try not to become discouraged, instead they strive to stay more positive. They don’t want to let things bring them down, especially when there is so much they want to experience. ENTPs don’t mind when things get a little bit difficult, they just do their best to problem solve and more forward. They don’t like allowing things to hold them back, since this leaves them feeling like they have failed in some way. ENTPs do sometimes feel a bit discouraged if they can’t seem to overcome certain difficulties, but they do their best to keep moving.

ISTJs are very driven people who don’t like allowing things to set them back or prevent them from accomplishing their goals. It takes quite a lot to really discourage them, since they are often prepared to face challenges along the way. ISTJs strive to get things done efficiently, and so they don’t want negative thoughts and emotions to prevent them from accomplishing this task. For the ISTJ it is actually less likely that they will become discouraged, and more likely that they will aggressively fight to overcome their struggles.

It takes a lot for ESTJs to really become discouraged in life, since they focus on overcoming challenges. For them it would require consistent setbacks, as well as a more logical point of view showing them that their path just won’t work. ESTJs only become discouraged when they have invested a lot of energy into making something happen, and they finally realize it isn’t going to work out like they had hoped and planned. In most situations the ESTJ will simply press on and find another solution to whatever problem is standing in their way.

ISFJs do their best to remain positive and don’t like allowing themselves to become discouraged. The reason ISFJs to work avoid feeling discouraged is because they care deeply about tending to the needs of others. They cannot falter or fall behind, since they often have so many people who are counting on them to get things done. They often cannot allow themselves to feel too discouraged since they don’t want their actions to let others down and leave them feeling disappointed.

ESFJs do their best to remain positive in life, mostly because they have other people depending on them. They often take on the needs of their loved ones and feel responsible for their happiness and well-being. Since ESFJs take so much onto themselves, they often feel like they cannot let themselves become discouraged when bad things happen. ESFJs often feel like they need to overcome their struggles and find a way to make things work because of the people they love.

ISTPs don’t usually allow themselves to feel discouraged, and instead just focus on the present moment. When things don’t go their way they simply try to focus on the present and move forward through the struggles. ISTPs prefer not to whine about something going wrong, they want to focus on coming out of it and problem solving if need be. They don’t allow their emotions to discourage them or make them feel like they are going to fall behind, they just find another way around the problem.

ESTPs don’t like getting discouraged when things don’t go their way, they just try to overcome this. But there are times when their feeling can get the best of them, especially when they continue to endure struggles. ESTPs don’t like feeling restrained and so sometimes their inability to overcome a problem can be extremely upsetting for them. When this happens they often need to take a step back and find a way to unwind before moving forward with the problem.

ISFPs don’t like becoming discouraged, instead they try to focus on the positive. ISFPs want to look on the bright-side of things, so that they don’t become overwhelmed with these negative emotions. They prefer to live in the present and soak up the joy in the world around them. For the ISFP it is better to move on from something that leaves them feeling discouraged, so that they can move onto better and happier things in their life.

ESFPs do their best to avoid becoming discouraged, and are often seen as very positive people. For them it is best to avoid anything that might drag them down or leaving them feeling unhappy. It takes a lot for the ESFP to become discouraged, but when it happens they will have a hard time overcoming these feelings. They often need someone who can bring them into a better mindset, or help the ESFP to solve whatever struggle it overwhelming them.