ISFJ Flirting & Dating: How to Attract an ISFJ 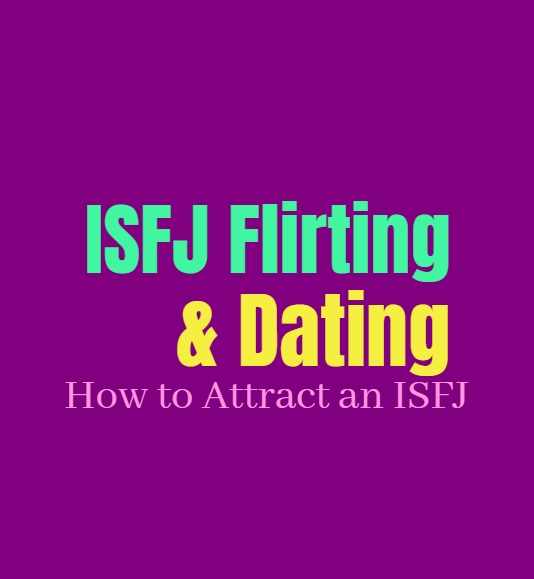 ISFJ Flirting & Dating: How to Attract an ISFJ

When it comes to dating and relationships the ISFJ does often value this part of their life very much. They want to find someone they can share themselves with and feel that intimate connection. ISFJs are often seen as more reserved and quiet people, but that doesn’t mean they aren’t capable of flirting and being rather charming. When the ISFJ is interesting in attracted someone, they do often have their own way of flirting and trying to draw them into their attention. For the ISFJ romance and finding the right partner is important, and so they might even enjoy the process of dating in order to find that special someone they can share their lives with.

ISFJs can be rather playful people, especially when they are flirting with someone they like. Their advances might not be super obvious though, as they can be fearful of scaring someone away. The ISFJ can be a bit nervous about letting someone know their true feelings, and so they try to be more subtle about it. They become a sassy version of themselves, wanting to draw the object of their affection in, and cause them to pay attention to them more. Instead of being straightforward and making it known how they feel, the ISFJ wants to find other ways of making someone interested. They aren’t normally the one to make the first move when it comes to romance, as they really do become nervous of having this person turn them down. Because of this fear the ISFJ is often more likely to tease someone or be playful towards them, rather than outright flirt in the more expected ways. When the ISFJs tries to make a person laugh and is showing their truly playful side, this can certainly be a sign that they are flirting with them.

The ISFJ is either playful and teasing, or might have a tendency to avoid someone they have a crush on. If they are too nervous about making their feelings known, they are likely to try and draw this person in from a distance. They might hang out with the same people and try and be friendly and social, in hopes that it might intrigue their crush. ISFJs just have a hard time being too forward with someone they truly like, and so there are times when they might not directly flirt with them because of this.

In a relationship the ISFJ is very committed and giving, and will do just about anything to make this person happy. They care about their loved ones, especially someone they are in a romantic relationship with. ISFJs take these types of connections very seriously and don’t believe in doing anything which might jeopardize this. The ISFJ is often very loyal and faithful to someone they are with, especially if they receive that loyalty in return. They just don’t believe in being someone who constantly bounces around from one person to the next, instead they want to stick around and try to make things work with the person they have. For the ISFJ this type of commitment is something which should be nurtured and valued, not tossed aside for something better.

ISFJs in a relationship are giving people, who will go out of their way to make their loved ones happy. They will likely take care of their needs even when their partner does not ask for it. ISFJs are good at sensing the needs and emotions of others, and this is something which comes into play with their relationships. When they care for someone they strive to make them happy and fix any problems they might be dealing with. The ISFJ also likes to shower their partner with gifts and surprises, and anything which they know will bring them joy. This is about seeing that special person smile, as the ISFJ really does feel a sense of purpose when they can make others happy.

ISFJs really aren’t fans of casual dating but they might participate when they are younger. For the ISFJ this just means going on a few dates, and meeting new people even if the intention isn’t to find someone they can commit to. This is something ISFJ understand as a process of connecting with others and potentially learning what they like and dislike in others. While they can sometimes see the intentions behind it, casual dating is rarely rewarding for the ISFJ. They prefer being in committed relationships, and are often searching for someone truly special. Casual dating can feel rather exhausting after a while, almost like it doesn’t serve any real purpose for the ISFJ. If they aren’t working towards an ultimate goal of finding the person they can share their lives with, then the ISFJ likely won’t find it all that rewarding. ISFJs do know how to have fun and they enjoy going out with friends, but dating casually can become draining rather quickly for them. At first it might be fun and something they can share with their close friends in conversation, but it won’t take long for them to grow weary of this.

What Attracts the ISFJ

ISFJs are often attracted to people who are passionate and exciting. They are drawn to those who have a truly interesting story to tell and are willing to share this with the ISFJ. They do sometimes find themselves drawn to mystery in others, since they are curious about people and what makes them who they are. A mysterious person can feel like a puzzle they need to figure out, and it is truly rewarding when that person lets the ISFJ in on their secrets. They are attracted to people who can share exciting things about themselves, and make the ISFJ feel special for being the one they come to. They also are interested in someone who listens, someone who shows a supportive side and is compassionate and warm towards the ISFJ. They aren’t the ones to make the first move so they often are attracted to people who are willing to show their affections and take that step. While ISFJs don’t want someone who is too forward, they do want to know that the flirting is leading to something, otherwise they might lose interest.