What Each Personality Type is Actually Running From 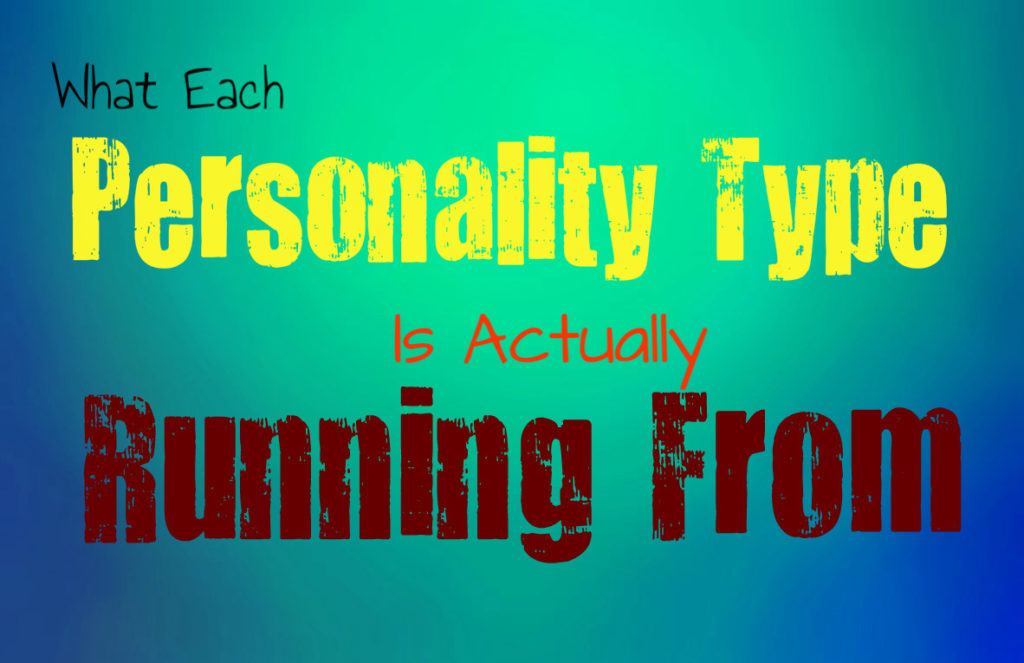 What Each Personality Type is Running From

Oftentimes we are running from parts of ourselves, or something that we fear might happen. It can be difficult when we are attempting to avoid something, especially if we do not even realize we are doing it. Here is something that each personality type, is likely running from in their lives.

INFJs have a tendency to be their own worst critic, and will often be harder on themselves than anyone else possibly could. They are compassionate and warm souls, with a desire to do good for others. This desire to do good for the world, can sometimes cause the INFJ to fear parts of themselves. They do have a darker side to their personality, one that they try to smother at times. The INFJ simply is a passionate person, who knows what they believe in and will stand up for it. INFJs might be running from themselves, more than they are running from anything else. A fear that they might not live up to their own expectations, can often weigh very hard on their shoulders.

While ENFJs do enjoy spending time alone, they despise the feeling of loneliness. They want to feel connected to others, and thrive on being around people they love. ENFJs enjoy caring for the needs of people, making it important for them to feel connected. An ENFJ with no one to help, will feel extremely sad. They work hard to keep themselves surrounded by loved ones, and do whatever they can to provide for their needs. This can stem from their desire to avoid loneliness altogether, so the ENFJ keeps their loved ones close and cared for.

INFPs despise shallow conversations, actions and intentions. They want to interact with people who are real, and who believe in making their lives meaningful. INFPs are often avoiding this feeling of meaninglessness, and might even be fearful that they can fall into it themselves. They want to make a difference in the world around them, and might feel like they were meant for greater things. They also have a tendency to become inactive, which can be something that puts a great burden on them. INFPs simply want to search for truth and sincerity, and are constantly trying to avoid anything shallow or meaningless.

ENFPs take a lot of risks, and might find themselves putting it all on the line for the sake of possibility. Because of these actions, ENFPs encounter trouble from time to time. This can cause the ENFP to run from parts of their past, and the mistakes they have made. This does not mean that the ENFP regrets their past, they likely have learned a lot from what they have encountered. Although they do not regret it, there are probably some things they are trying to get away from. The ENFP simply wants to keep moving forward, and will continue to grow and find new meaning in their lives.

INTJs strive to grow and learn, and despise the ignorance that they see around them. INTJs desire to remove ignorance whenever they can, and this motivation pushes them to continue learning. They want to know as much as they can about pretty much everything, in order to avoid encountering a situation where they cannot navigate properly. INTJs might be running from failure in their lives, and will work hard to avoid it. They accept the idea that they cannot reach perfection, but simply do not want to walk into a situation blind. Because of this, the INTJ is constantly researching and analyzing everything- before they make the next step forward.

Although ENTJs despise incompetence, they often work hard to avoid that in their lives. One thing that ENTJs are trying to avoid more than anything though, is betrayal. They want to surround themselves with hardworking and loyal individuals- and strive to only have those close to them who they can trust. ENTJs do not want someone who is going to stab them in back, since they likely have plenty of other things on their plate. This can often cause the ENTJ to avoid close relationships altogether, for fear of connecting with someone disloyal. The ENTJ will only let someone in, if they truly believe that they can trust them.

INTPs dislike feeling like they are a disappointment to themselves or those around them. They are always working hard to become valuable and at their core, the INTP simply wants to provide knowledge and understanding. They desire to solve the problems of their loved ones, and will strive to understand them. INTPs are always trying to do what they can to become better, but oftentimes they have a fear of failure. The INTP might find themselves remaining stuck, simply because they hate the idea of being a disappointment. The INTP has likely grown up being told how much potential that they have, and this is more of a burden for them than anything else. Sometimes the INTP will even avoid letting people into their lives, for fear that they might disappoint them.

ENTPs often seem like they are incapable of staying still for too long, they truly hate feeling stagnant. ENTPs do not want to feel boring, and because of this they are often running from the possibility of becoming stagnant in their lives. ENTPs enjoy exploring new ideas and exciting possibilities, and do not want to feel held back in any way. They are often seen as exciting and even rebellious, because of this desire to be independent. Feeling stuck or stagnant, is one of the worst things for an ENTP.

ISTJs are hardworking people, who are not afraid of getting their hands dirty. They enjoy making an honest living, and simply want to provide for their family. ISTJs dislike feeling inadequate, and will often strive to be accomplished and successful in their lives. They are always pushing themselves harder, in order to feel like they have truly done their best. Because of this desire to do well, ISTJs are often running from feelings of inadequacy. They dislike the idea of other people believing that they are not doing their very best.

ESTJs are always pushing themselves in order to get things done, especially when it comes to providing for the practical needs of their loved ones. ESTJs do not want to be seen as useless in the eyes of others, and because of this they are always going above and beyond to be successful. ESTJs are often running from the feeling of being useless, and will do whatever it takes to avoid this completely. They are truly caring and hardworking people, and deserve to be appreciated for their efforts. But oftentimes in the ESTJs past, they have experience people who do not see them properly- this has likely caused them to be fearful of feeling put down in this way.

ISFJs care very deeply for their loved ones, and are always doing what they can to make them happy. Something that ISFJ is often running from or avoiding completely, is the idea of loss. They might even do whatever they can to keep their family close, in order to keep them safe and protected. The ISFJ does not want to lose the people they care for, more than anything they want them to be happy and cared for. Their efforts to comfort those around them, often comes from their desire to avoid loss in their lives.

ESFJs work hard to care for their loved ones, and are extremely focused on the emotions of others. The biggest fear of the ESFJ, is feeling unloved. They are constantly trying to make themselves useful to those around them, which often stems from their constant avoidance of being unwanted. Part of their subconscious is pushing them to become needed by those around them, so that they do not become undesirable to those people. At their core, ESFJs simply want to make others happy- this comes from a truly good and sincere place.

ISTPs are very laid-back individuals, who do not like putting pressure on others. ISTPs also hate the idea of feeling like the people around them are holding them back or removing their freedom in any way. They will often spend their lives avoiding the presence of others, and a big part of this is because the ISTP is strongly avoiding having restrictions placed on them. They do not want to be controlling, but they also have no desire to control others. The ISTP simply wants to be able to live their lives in peace, and feel free to make their own choices.

ESTPs enjoy being able to explore and enjoy themselves. They often take their loved ones on exciting new adventures, and are constantly making life fun. ESTPs are always striving to be exciting, but part of this is because they have a fear of being forgotten. They might have experienced people leaving in the past, and because of this they want to keep their loved ones entertained and happy. ESTPs might even strive to work hard in their career, in hopes of making a name for themselves. They simply do not want to be forgotten, and want to be valued for their efforts.

ISFPs dislike being the center of attention, but they also hate feeling like they are being forced into anything. ISFPs will often keep to themselves, for fear of being pushed into situations they do not enjoy. They dislike having to take part in anything that does not feel morally right, and because of this the ISFP might appear to be running from these situations. The ISFP simply want to be left to make their own decisions, without feeling pressured by others to fit in.

ESFPs dislike feeling ignore, and this is often the reason why they strive to be so entertaining and fun. The ESFP wants to draw attention to themselves, because they want to be important to their loved ones. The ESFP might be running from experiencing any feelings of insignificance, and because of this they are constantly keeping the party going. If the ESFP relaxes, they might realize that their loved ones want to keep them close, even when they aren’t entertaining them.