ENFP Loss: How the ENFP Copes With the Many Forms of Loss 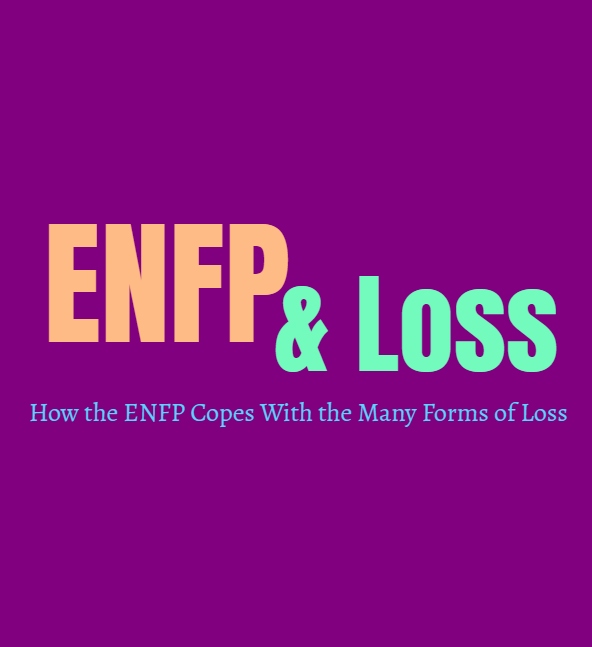 ENFP Loss: How the ENFP Copes With the Many Forms of Loss

ENFPs definitely deal with loss in their own way, but it can be difficult for them to fully move on from these feelings. ENFPs experience things very deeply, and their emotions can be overwhelming at times. While ENFPs do care about expressing themselves and connecting with others, sharing their inner feelings isn’t always as easy for them as people might think of expect. Since they are such outgoing people, others can often assume that they share what they are going through, but sometimes ENFPs want to put on a happy face in front of others. This depends on the ENFP and things they have been through in their lives, but being able to express that pain isn’t always that easy for them.

Accepting the loss isn’t always easy for the ENFP, even though they are more conscious of their emotions. Their inner feelings are definitely important to the ENFP, but that doesn’t mean they always know how to deal with them or process them in a healthy way. They feel things so deeply, and for them loss can be something which weighs heavily on their heart. They want to be able to continue moving forward, but sometimes letting go is difficult. When the loss is something very serious, like losing someone they love, the ENFP might not want to fully accept this. Sometimes holding onto that connection is more natural than trying to let go and move on. For the ENFP, it depends on the person and just how important they were to them. They are aware of their pain, and they do know how to accept it to some extent, but the process can be a long one for the ENFP.

There are times when the ENFP turns to distractions instead of fully accepting what has happened. Their extraverted intuition is their dominant function and so this is often what drives them forward. They might find that it is easier to bounce around and try to find new projects and places to keep their minds focused on something else. When the loss is too overwhelming to really accept right away, finding ways to keep their minds elsewhere. When the feelings are difficult for them, the ENFP just needs time to distract themselves for a while. Instead of drowning they need to keep their busy minds moving and sometimes being somewhere new helps them to process everything on better terms. For some this can seem like running away, but for the ENFP it is sometimes necessary. They feel things on such a personal level and so it isn’t always easy to express these feelings right away. They need this time, so long as they eventually come to terms with what is going on.

When the ENFP experiences a serious loss their first response is either to escape somewhere new, or to turn to people they love. It often depends on the severity of those emotions and just how much the ENFP has matured when this loss occurs. The less mature ENFP might need to escape completely and go find somewhere new to keep their minds distracted from their feelings. They need to keep moving so that they don’t feel weighed down by the overwhelming emotions of the situation. They might use this as an escape, or a way to avoid those negative emotions for a while. Sometimes this helps the ENFP to process everything though, and it can actually be good for them if they learn to accept what they are feeling through this process. ENFPs aren’t always great at being open when they are depressed or in pain, as they don’t want to burden people or weigh them down. They might put on a happy face and pretend like everything is fine, even when they are feeling truly upset or pained by the situation. The ENFP who has been taught to be strong in front of others, might be afraid of showing this pain. They don’t want to have these feelings be rejected or judged by someone, and so they don’t always trust easily enough to open up about them.

When the ENFP does trust the people close to them, they often need to seek their comfort when they are struggling with a serious loss. They might also need time to themselves at first, to wallow and allow themselves to just let those feelings out. They need to feel free to be depressed for a while, and not feel like they are being judged for this. Having people around them who show support and can lift them up when they are struggling, is truly important for the ENFP. Just feeling that closeness and knowing that they are loved, is something the ENFP really needs in order to heal.

While ENFPs might be good at moving on in a more practical sense, they might struggle with actually letting go. When something or someone becomes a part of their heart, the ENFP doesn’t want to let go of this. Even when they have moved one and have continued to live their lives as if everything is fine, they are likely still holding onto that person or that thing from their past. For the ENFP it is simply easier to keep moving and keep distracted than it is to actually find a way of letting go when they have lost something which means a lot to them.