How Much Self-Control Each Personality Type Possesses 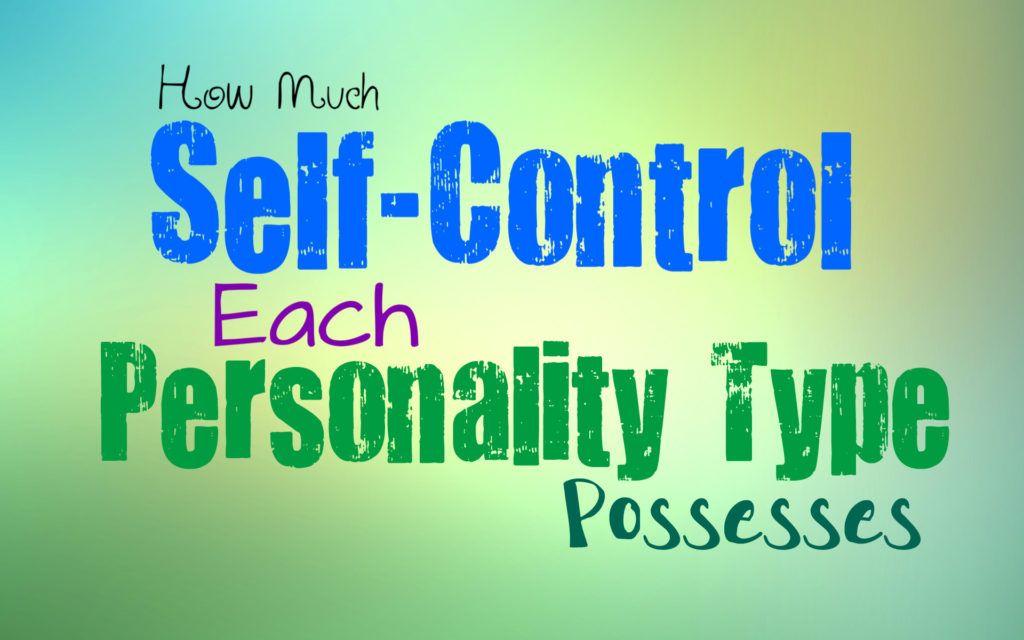 How Much Self-Control Each Personality Type Possesses

Trying to control your environment is not quite the same as controlling yourself. Here is how much self-control each personality type often possesses.

Most of the time INFJs are excellent at practicing self-control. They pride themselves on being in control of their decisions, no matter how difficult it might be. INFJs hold themselves to very high standards, which often makes them good at controlling themselves. They may seem too controlled in some situations, but they simply hold strong to what they believe in. INFJs will struggle with control when it comes to the people they love requesting things from them. They have a hard time saying no to the people that they care for the most. When an INFJ is under stress they may appear different than normal, and will go through brief periods of lacking self-control. They might appear to be taking chances and living completely in the present moment when they are under too much stress.

ENFJs are often very good at being in control of themselves and their environment. They will juggle many tasks at once, and seem completely capable of doing this without a problem. They pride themselves on being able to control themselves in situations, possessing strong wills and minds. ENFJs do not lack control with others, since they make the conscious choice to do things for people most of the time. There are times when ENFJs do become overwhelmed, and they might begin living very much in the present moment without a thought about how it will impact their future. This happens under extreme stress and causes the ENFJ to lack self-control for a period of time.

INFPs are good at practicing self-control with the things that mean the most to them. If they believe in something as a moral choice, they will be able to stand up for themselves and stay strong. If there is something that an INFP doesn’t hold importance to, they will often lack self-control in that situation. They might find themselves being rather laid-back about something, spending hours in their own world instead of doing the work that needs to be done. If it isn’t important to an INFP, they won’t have the control to force themselves to accomplish something. The things that they find important though, they will have a lot of self-control with.

ENFPs take a lot of chances in their lives, which does make them appear to have less self-control than other types. They prefer to live life as it comes at them, never being held back by ridiculous standards. In a lot of situations ENFPs will not desire to control themselves, and will prefer to jump into things head first. Life is not about being in control for them, but more about living with enthusiasm and passion. ENFPs do sometimes make foolish mistakes because of their lack of self-control, but they always learn from those mistakes. If something is extremely important to them, or if someone they care about is depending on them, ENFPs will be more than capable of practicing immense self-control.

INTJs are often very controlled individuals, who make their decisions based on logical thought. They take their time before jumping into things, wanting to be sure they are making the smartest choices. INTJs are great at practicing self-control, and will often pride themselves on their decisions. They know how to hold back when it is necessary, and are great at controlling themselves and their decisions. This often makes them appear cold, but they are simply logical people who strive to understand their world completely. INTJs do have moments where they are under extreme stress, which causes them to live more in the present moment and over indulge in things. During these brief moments they do struggle with self-control, but this is not their normal behavior.

ENTJs are known to be extremely controlled individuals, who work very hard to accomplish their goals. They practice immense amounts of self-control in their daily lives, and are great at making decisions the way they want to. ENTJs are strong-willed people, which makes them very capable of controlling their actions and emotions in most situations. ENTJs believe in being able to control themselves in order to accomplish their goals and get things done. They do have moments of letting loose, but most of the time they know how to deal with the aftermath of those situations.

INTPs are often good at controlling themselves in most situations, and keep to themselves oftentimes. They are good at logically seeing a solution to a problem, which often holds them back. They will see the potential ways that something can go wrong, which causes them to refrain from jumping in. INTPs like to analyze something before making any moves forward. This often causes them to control themselves, rather than take chances in most situations. There are moments when INTPs do have bursts of risk taking, but they are good at recovering if things go wrong, since they usually have back-up plans in place.

ENTPs are not always great at executing self-control, mostly because they enjoy taking risks. They will often logically calculate those risks beforehand, and figure out if they are worth it. They will get themselves into trouble often because they enjoy pushing people and crossing lines. ENTPs are great at getting themselves out of whatever situation they get themselves into, which is beneficial for them. ENTPs simply do not desire to control themselves most of the time, since they would rather learn from their experiences.

ISTJs are extremely self-controlled individuals, who know where to draw lines in their life. They are good at holding themselves back in certain situations, especially if it is important. ISTJs are intelligent people, who work very hard and want to accomplish their goals. They realize how important it is to control themselves in their lives, in order to get to where they want to be. ISTJs rarely lack self-control, and are some of the most well adjusted individuals.

ESTJs often have a immense amounts of self-control and posses a lot of willpower. They are constantly keeping themselves controlled, and are great at controlling their environment as well. They work hard to get things done and will do whatever it takes to accomplish their goals. ESTJs are often stubborn people, because they know what they want and are good at getting it. They push themselves very hard to succeed and value efficiency more than anything else.

ISFJs often have a decent amount of self-control, especially when it is important. When it comes to work situations ISFJs can keep themselves controlled and calm. They are level-headed people who know how to get things done as efficiently as possible. They are good at following orders and will keep themselves focused on the task at hand. ISFJs care about their family very much and will be able to do whatever it takes to help them out. Sometimes they lack self-control when it comes to their family, and will do more than they should to make them happy.

ESFJs are actually fairly controlled individuals, who are good at keeping themselves cool in most situations. They are definitely good at practicing self-control when they believe it is most important. The only issue with ESFJs and self-control, lies in the fact that they react mostly to the emotions of others. They will often lack self-control when it comes to giving their loved ones what they ask for. ESFJs will do whatever it takes to make others happy, which can sometimes make their control rather weak.

ISTPs like to live in the moment, which can make control difficult for them. They prefer to analyze things before stepping into them, but often their actions are not ruled by their desire for control. ISTPs enjoy taking calculated risks, which sometimes causes them to jump into more dangerous situations. Fortunately they are great at navigating anything new and even scary, making them good at getting themselves out of trouble.

ESTPs spend most of their lives living in the present moment, which doesn’t make for much self-control. They don’t always think things through, and will often jump into things without thinking about them that much. They enjoy taking risks and like making life more exciting. ESTPs will often dive head first into a new adventure, which can get them into difficult situations. They aren’t ones for self-control, but they do make life more fun.

ISFPs live life in the present, which can sometimes make practicing self-control difficult for them. If they morally believe in something then they will be capable of controlling themselves in that situation. Most of the time ISFPs like to live a quiet and peaceful life, enjoying their surroundings. They don’t really care much for controlling themselves, and would prefer to enjoy the moment as much as they can.

ESFPs live life in the present moment, making decisions as they go along. They aren’t always great at practicing self-control, they often would prefer to take risks. ESFPs want to make life as fun as possible, constantly being the entertainers. If doing something will make other people laugh, ESFPs will go pretty far to entertain the group. They enjoy living life to the fullest, but aren’t really great at controlling themselves in most situations.