Important Facts That You Should Know About The ENFJ Female 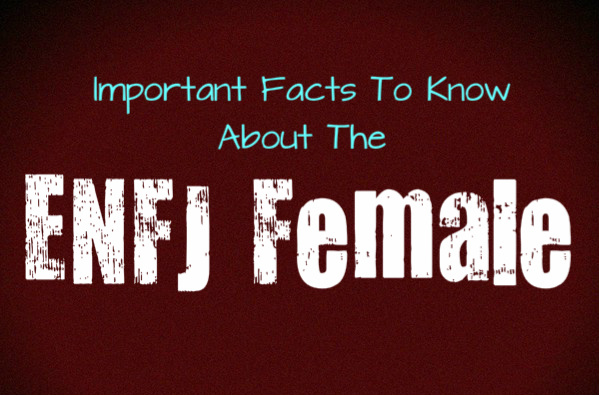 Important Facts That You Should Know About The ENFJ Female

ENFJs are known for their warmth and kindness, but they are also rather dreamy individuals. They have intense inner worlds, and are some of the rarest personality types. ENFJ women have many qualities that make them special, and here are just a few of those.

ENFJ women are extremely nurturing and might even be considered the “mother” of their social circle. Even from a young age they have a natural desire to help others. ENFJs can feel the emotions of those around them, which is something they can’t really ignore. When someone close to them is upset, they will do whatever it takes to help them feel better. ENFJs are not just good at comforting, but are also skilled at solving problems at hand. If there is some sort of action that they can take to make things better, they will do whatever they can.

ENFJ women are lucky in the fact that their nurturing aspect is seen as a positive thing by most people. They are often viewed as giving and compassionate people- and that is sincerely who they are at heart. They want to see people happy, and feel instantly good when they are capable of making others feel better. They can easily see the pain in the world around them, and strive to do their best at riding whatever hurt they can.

They Have Leadership Skills

ENFJ women are very loving, but they also have excellent leadership skills. They are good at taking charge of a situation and finding the best way to navigate it. They often take on numerous tasks and will juggle many different things at once. This makes them great at running their own business, since they can often foresee potential outcomes. This helps the ENFJ navigate ways to prevent anything bad from happening, since they can often see ways around any future issues.

ENFJs also make excellent bosses because of their positive personalities. They have an ability to give the right amount of discipline, combined with positive feedback. They often make their workers feel valued, which causes them to work even harder. They also know how to be stern if it is required of them, and will be able to push those around them to do better. Being capable of taking control is something that might cause the ENFJ woman to be misunderstood. Their strength and natural ability to problem solve, can sometimes be a difficult thing to handle. They might take on too many tasks, without really wanting to ask for help. Thankfully, they are also skilled at picking themselves up when things go south for them. ENFJ women don’t like to give up, and will push themselves as hard as they possible can in order to accomplish their goals.

They Are Giving, But They Have Limits

ENFJ women are extremely giving, and will do just about anything for the people they love. Their primary focus is making others happy- but they do have their limits. ENFJs can become extremely frustrated if they feel like those closest to them are not appreciating their efforts. If things go on too long without the ENFJ getting much in return, they will eventually snap. It takes a long time for this to happen, but this emotional burnout is a very real occurrence. When the ENFJ is not being taken care of properly, they will overexert themselves and become emotionally exhausted.

It is important for the people around the ENFJ to give back as much as they can. They might not be able to do as much as the ENFJ does, since they have a way of going above and beyond. Just putting forth some effort to show that you care, is plenty for the ENFJ to feel loved and appreciated. They simply want to know that their efforts are not going to waste on someone who does not care. They want to be sure that they are investing their energy into the right people- people who truly appreciate what they are going through for them. ENFJs are loving people, but they certainly are not okay with being used.

Their Charisma is Rather Powerful

ENFJ women are extremely charismatic, with energetic and affectionate personalities. People are easily drawn to their kindness, and their natural way with words. They know how to make others smile, and are often skilled at bringing up the energy in a room. ENFJs often know the right words to say in order to console someone who is sad, or even to calm down someone who is angry. They understand emotions very well, especially the emotions of other people. They have a natural ability to sense how someone is feeling, which makes them very likable people. They know how to appeal to just about anyone, and have a rather intense charm that can be a bit shocking to some people.

ENFJ women are extremely passionate individuals, who will stand by what they believe in. This is something that can throw people off, especially since they are normally very agreeable people. When it comes to the things that truly matter to the ENFJ, they can be rather boisterous and intense. They will give their opinion very decidedly, ensuring that everyone knows how they feel.  They dislike hurting people, and will attempt to express themselves in a way that doesn’t do so. Ultimately though, ENFJs know what they believe in, and refuse to hide those parts of themselves. They favor honesty, and don’t want to be seen as someone who isn’t upfront about what they want or what they feel is right. They work hard to help people, and will fight for a cause that they believe in.

ENFJ women can be extremely intense and passionate people- but they are also very giving and warm. They focus most of their energy on caring for others and only feel satisfied when they are making people happy. ENFJ women will do anything for the people they love- but can make rather fearsome enemies to those who wrong them. It takes a lot to cause the ENFJ female to truly become angry with someone, this usually happens when they harm someone that the ENFJ loves. They are strong-willed and driven, making them incredible friends and lovers.

Here’s Why We Believe That ENFJs Are Actually Superheroes