Are You Someone Who Enjoys Clubbing, Based on Your Personality Type 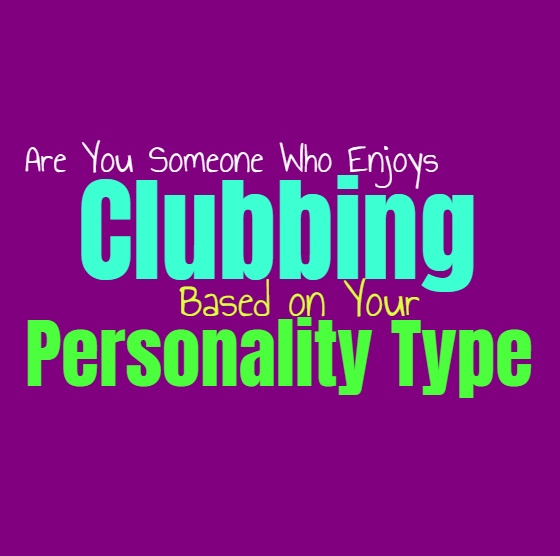 Are You Someone Who Enjoys Clubbing, Based on Your Personality Type

For some people going out clubbing and dancing can be a great and thrilling time, for others it just feels draining. Whether you are going out to the bars, or going dancing, the experience of going drinking with friends is not something everyone enjoy even at a young age. Here is how much you enjoy clubbing, based on your personality type.

INFJs aren’t usually the party or clubbing types, even when they are young. They might go through a phase of going out and trying to fit in, but it isn’t very fulfilling for them. INFJs who feel misunderstood might participate in some clubbing or bar hopping with their friends, just to make it seem like they share the same interests. For the INFJ this almost always feels exhausting, even when they are younger. For them it just doesn’t feel rewarding enough, and is a bit too shallow for the INFJ to really gain anything from it.

ENFJs do enjoy going out with friends and want to have a good time with them. When they are younger they might enjoy going clubbing with their closest friends, just to have fun and unwind. While they might participate in these activities, they can feel a little bit shallow sometimes. For the ENFJ clubbing and going out in this way is something they enjoy on occasion and not as a constant way of engaging with others. They often prefer at home get togethers, with their favorite people who they know and love.

INFPs really aren’t the clubbing type, and often find this draining and even boring. They aren’t really interested in shallow things and for the INFP going out clubbing or bar hopping just feels like a waste of time and energy. They might participate in this when they are younger, merely because their friends pressure them into going. INFPs do know how to have a good time, but loud places with a bunch of strangers rarely feels like a good time to them. INFPs would much rather

ENFPs might enjoy going clubbing when they are younger, mostly so they can go out with friends. For the ENFP it is more about fitting in and wanting to be popular with others. When they are young they do sometimes crave being liked, and so this makes it hard for them to turn down certain requests to go out. They don’t enjoy shallow things and so as the ENFP gets older this often feels a bit draining and pointless. They like experiencing new things and want to put themselves out there, but that doesn’t mean it is all that fulfilling for them.

INTJs really aren’t the clubbing kind of people, and this can often feel a bit exhausting for them. INTJs do like having a good time, but for them being in a crowd of sweaty and rude people, listening to loud music and having to shout over it, just doesn’t feel all that exciting for them. They prefer to do things which actually fulfill them and reward them, something that provides some kind of sincere value. Going bar hopping or clubbing often feels shallow, but that doesn’t mean they won’t give it a try in order to see what they can learn from it.

ENTJs enjoy experiencing a bit of excitement and so when they are younger they actually might enjoy going clubbing or out to bars. For them it is about sowing their oats a bit and really wanting to enjoy being able to experience these things. ENTJs are not incapable of settling down when they find the right person, quite the opposite. They simply want to feel free to unwind when they have the spare time to do this, especially when it comes to going out with their friends. While it might not be the most rewarding or fulfilling experience for the ENTJ, it doesn’t mean they can’t have a little bit of momentary fun.

INTPs are rarely the clubbing type, but they might participate in this when they are younger. Sometimes INTPs push themselves to try new things in order to appear a certain way, or avoid constantly having others call them strange or unusual. INTPs don’t really gain much from going out clubbing but sometimes when they are feeling down this is exactly what they will do. Sometimes it is more about going out with friends and having a good time, even if they become extremely exhausted afterwards.

ENTPs might not mind clubbing all that much ,especially when they are younger. For the ENTP it is more about going out and experiencing something a bit different than their usual night out. If they are around people who go clubbing constantly, then it will quickly become boring and a bit exhausting for them. They don’t like repetition and would rather find different things to do when they go out with friends, new things they can try and experience.

ISTJs aren’t usually the type of people who enjoy going out clubbing or bar hopping. They are focus on building their lives and their futures and they aren’t usually convinced that this will happen in a club. ISTJs enjoy going out and having a good time, but clubbing isn’t usually their idea of fun. Being in a crowded and loud place with a bunch of strangers is rarely all that appealing for the ISTJ. They would much rather find ways to enjoy themselves which might actually lend to their personal tastes, something much less shallow.

ESTJs don’t really like going out clubbing all that often, but it doesn’t mean they won’t participate in this. They do like having a good time with their friends, especially when they need to unwind. When the ESTJ feels a bit bored and like they need to blow off steam, they like going out with friends and sometimes this means going to the bar or even clubbing when they are younger. For them it is more valuable to do things which bring them closer to the future they want, but that doesn’t mean they don’t like to have a good time.

For the ISFJ going clubbing isn’t usually that rewarding of an experience, even though they might participate in it when they are younger. ISFJs are not all that interested in going out and partying, since it can be a bit draining for them. They do however want to fit in and make their loved ones happy, and so they do their best to follow through with this. When everyone is going out clubbing the ISFJ will do their best to join them, even though it can feel a bit pointless for them.

ESFJs aren’t usually the clubbing type, but they might participate in this when they are younger. ESFJs want to go out with their friends and have a good time, and so they might go clubbing as a way to unwind a bit. This will often wear thing rather quickly though, since it doesn’t really provide them with the value they are looking for. ESFJs will go clubbing or bar hopping with friends when they are younger, mostly because they want to fit in and have a good time with these people. When they are older they are much more interested in experiences which reward them and lead towards the future they want.

ISTPs might actually enjoy going clubbing when they are younger, just because they enjoy experiencing things and living in the present. It can be fun for them to either go out bar hopping or going to nightclubs, just to experience the hype and excitement around them. ISTPs might become drained of this after a while, but they go with whatever they are most excited with at the moment. If they want to go out and blow off some steam at a club, then they will.

ISFPs enjoy living in the present moment and so sometimes this means experiencing things like going out clubbing. If their friends want to go out and have a good time the ISFP might be convinced to join them. They want to live in the present, even if they aren’t always that rewarded by going clubbing. For them it is about doing whatever feels right in that moment and sometimes this means just going out and blowing off some steam.

ESFPs often enjoy clubbing or going to bars with their friends, mostly because they like to have a good time. ESFPs don’t want their lives to be boring or stagnant and sometimes they just want to hop into new situations freely. For them going clubbing is really just about living in the moment and trying to have a great time with some of their favorite people. ESFPs also enjoy meeting new people, even if they aren’t going to see them ever again.