Are You Likely to Play With Fire, Based on Your Personality Type 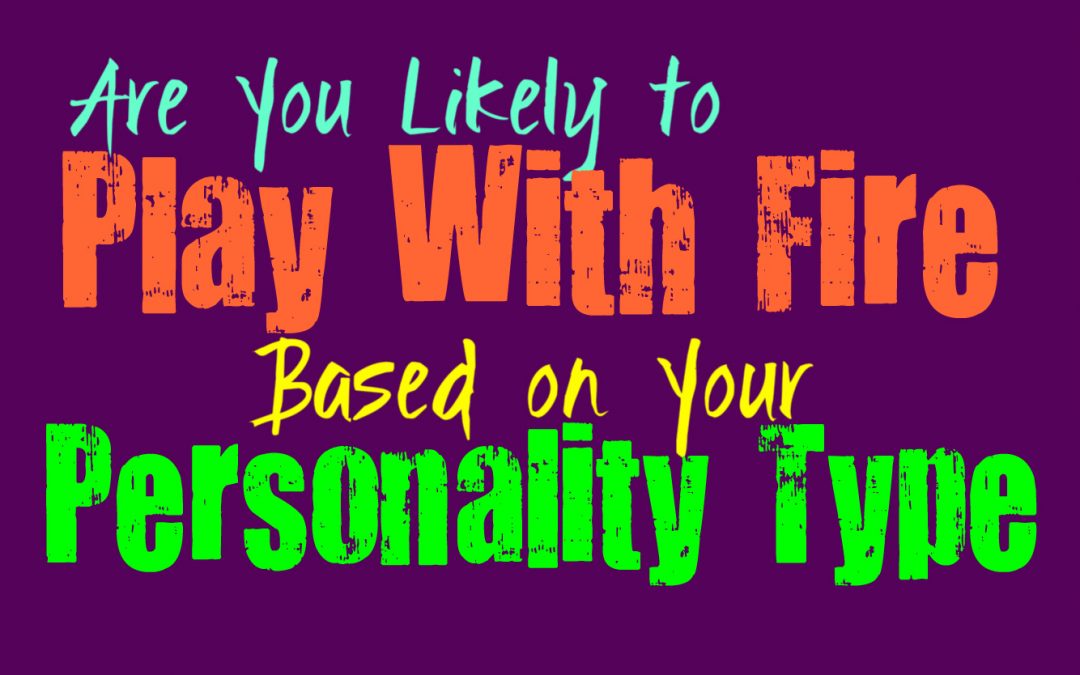 Are You Likely to Play With Fire, Based on Your Personality Type

While some people try to avoid trouble, others might seek it out a bit. There are some people who crave that feeling of adrenaline they experience when playing with fire, metaphorically speaking of course. They enjoy being able to push the limits and just dance on the edge of trouble. Here is how likely you are to enjoy playing with fire, based on your personality type.

INFJs usually live on the safe side of things, but there is a part of them that does have a strong desire to play with fire. Some INFJs are more likely to be drawn to this behavior, especially if they might have a more self-sabotaging nature. When the INFJ is feeling a bit stifled or like they have been overwhelmed for too long, they can go through phases of wanting to play with fire a bit. They do sometimes get curious about things and want to experience a different side of life. Most of the time INFJs are contradictory people, who can seek to play it safe and yet sometimes want to play with fire a bit.

ENFJs often prefer to play things safe and live their lives taking care of their responsibilities. They care for others and don’t want to do anything which might jeopardize their happiness. This sense of consideration for the well-being of others, makes it challenging for the ENFJ to want to take any major risks. In life. While they can be safe people sometimes, there is often a part of them deep inside that desires to experience a more dangerous side of things. They might occasionally play with fire, especially when they are feeling a bit like their life has become too stagnant.

INFPs can be seen as safe people who don’t seek out risks, but there is a completely different part of them that not everyone can outwardly see. INFPs do have deep and complex desires, and they are naturally very curious people. There is often a part of them which seeks out the more dangerous things in life, and so they will often enjoy playing with fire just a little bit. While they might not go too far, INFPs enjoy just crossing the line enough to see what it is all about.

ENFPs absolutely enjoy playing with fire, since they often live on the edge of things. They don’t like feeling stagnant and believe that they need to follow their heart in life. Sometimes this leads the ENFP to being a bit dangerous, and even engaging in a bit of fire play. They like being able to just toe the line, curious what it might actually lead to. While ENFPs can see where their boundaries are, they almost always seek to cross them just a little bit. For them playing with fire feels much more natural than playing it safe.

INTJs prefer to be a bit safer with their decisions and so they don’t often feel the need to play with fire. For INTJs the greatest reward in knowledge and being someone who is both capable and efficient. They don’t need to seek out useless thrills in order to feel truly fulfilled in their lives. If they can logically see where taking a risk will get them, then they aren’t going to jump into the line of fire just to experience a little excitement. For them playing with fire can be foolish and pointless, unless they can logically see where this could be beneficial.

Most of the time ENTJs approach things from a logical and direct approach, instead of wanting to push boundaries that don’t make sense to them. For the ENTJ playing with fire often means getting burned and this just isn’t something they want to risk. They are willing to push boundaries and take calculated risks, but this is only when they see that the reward is well worth any risk they are taking. ENTJs are strong-willed people and they don’t avoid playing with fire because of fear, it is simply because it doesn’t make logical sense for them to do so.

INTPs do sometimes feel the need to play with fire, mostly because they are curious people. They naturally want to experience different things, and even push the boundaries of what they see around them. Their desire to uncover information and dive into something completely, makes them a bit more drawn to taking risks. While INTPs don’t like being foolish or reckless, there are times when their curiosity causes them to push these limits. INTPs try to be prepared for potentially fallout of their actions, but that doesn’t mean they don’t feel the occasional need to play with fire.

For ENTPs life needs to be filled with new ideas and experiences, and so they don’t like remaining stagnant at all. They enjoy pushing the boundaries of others, and testing the limits of what they should and should not do. For ENTPs playing with fire is often something that comes naturally, since they strive to really experience things from different angles. ENTPs aren’t afraid of playing with fire, as long as they know they can get themselves out of whatever trouble arises.

ISTJs definitely don’t enjoy playing with fire, instead they prefer to live their lives more on the safe side of things. They are capable of taking necessary and calculated risks, but this is simply because they can logically see the rewards. ISTJs don’t like playing with fire, since this often shows a lack of control and respect. They believe in valuing what they have, instead of taking risks which might result in them losing everything that truly matters to them.

ESTJs aren’t likely to enjoy playing with fire, especially when it could cause them to lose things that matter most to them. ESTJs believe in making choices which will result in the lifestyle they want, and not cause them to miss out. They don’t feel a desire to do anything which might jeopardize their lifestyle and so for them crossing certain lines just isn’t necessary. For the ESTJ people who constantly feel the need to play with fire are simply foolish and reckless.

ISFJs don’t like crossing lines and they certainly aren’t fans of playing with fire. They can sometimes live a safer and more sheltered lifestyle, but that is what they enjoy. ISFJs care for others and believe in being respectful and aware of their needs. For the ISFJ playing with fire means they are risking the things which matter most to them, and might result in their loved ones getting hurt. ISFJs don’t want to do anything which could be deemed as reckless or foolish, and to them playing with fire is often both of those things.

ESFJs aren’t often interested in playing with fire, especially with things they know will end badly. They are very aware of the emotions and needs of others, and so they focus on tending to these things. For ESFJs taking too many risks means they could lose what matters most, and so they aren’t often intrigued by the prospect of playing with fire. There are times when the ESFJ might seek out a little bit of reckless behavior, but this is often when they are pushed over the edge and feeling a bit lost in their lives.

ISTPs do sometimes enjoy playing with fire, especially when they are feeling a bit stagnant. ISTPs seek out things which will excite them and make them feel truly alive. They are curious people who will follow the present moment and seek out things which fulfill them. They do have an adventurous side to them, which causes the ISTP to play with fire on occasion. They enjoy crossing those lines which others might be afraid of, sometimes just enough to mix things up.

ESTPs definitely have a tendency to play with fire, especially when they are feeling too stagnant in their lives. They seek out the things that are most thrilling to them, and want to live with a sense of adventure. This sense of curiosity can certainly get the ESTP into a bit of trouble, but they do their best to find a way out of it. While ESTPs can sometimes get burned, they still seem to seek out any opportunity to play with fire.

ISFPs are often viewed as shy people from an outside view, but there is far more to them than this. While they live inside of their own thoughts and emotions, they do sometimes enjoy seeking out thrills. ISFPs certainly enjoy playing with fire once in a while, especially when it feels like the right thing for them in that moment. They follow their hearts and sometimes this leads the ISFP down some riskier and more adventurous roads.

ESFPs definitely enjoy playing with fire, especially when they are feeling a bit stagnant in their lives. They seek out the things that excite them most in life, and simply want to live each moment to the fullest. For ESFPs playing with fire is almost second nature, and is something they begin to perfect over time. They aren’t afraid of taking risks, sometimes they do this simply to feel a bit more alive. ESFPs definitely know how to play with fire, but occasionally this does lead to them getting burned.