Are You Good at Responding to People, Based on Your Personality Type 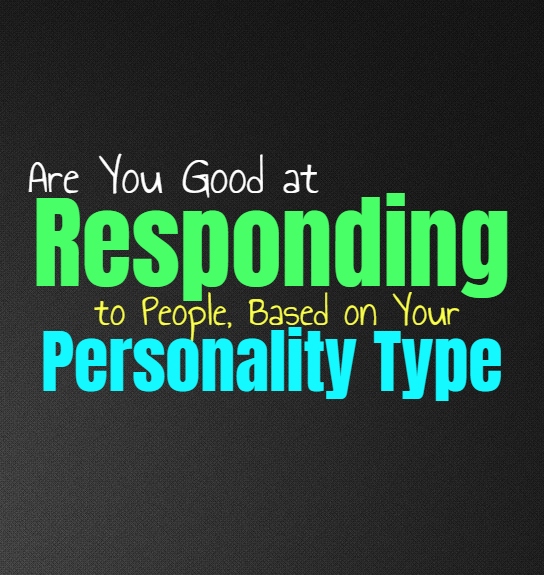 Are You Good at Responding to People, Based on Your Personality Type

Some people are much better at responding to others when they speak or ask questions. There are others who may choose to ignore these comments, or might not even recognize that they have failed to respond. This often happens with people who are very much inside of their own minds and so they struggle to really respond to everyone around them. Here is how good you are at responding to people, based on your personality type.

INFJs are often courteous people and so they don’t like feeling as if they have ignored someone. Most of the time they are good at responding to people who are right in front of them, but might struggle when it comes to messages. This is simply because they find themselves needing time alone and they can become drained by too much interaction. When the INFJ is in need of time by themselves, they might struggle to really respond to people who are trying to speak with them. They need to be able to shut off from the outside world so that they can recharge and feel like themselves once again.

ENFJs try hard not to be rude and so they don’t like ignoring or neglecting people. They want others to like them, and so for the ENFJ it can feel like a failure if they have neglected to respond to someone. They are often great at communication and know how to connect with people easily. If someone tries to speak with the ENFJ they can usually muster up some kind of response, instead of simply neglected them. They may have time when they are very busy and struggle to respond to texts and messages, but they always try their best to respond eventually. They just become caught up in what they are working on, but ultimately they don’t like ignoring people.

INFPs aren’t really great at responding to people all of the time, since they can find themselves distracted somewhat easily. INFPs minds might be going off in different directions, and so they lose connection to the world around them. The INFP might even feel as if they have responded to someone, since they find themselves thinking about their response internally. This isn’t something they do intentionally, they just have such busy inner minds which are constantly thinking through so many new ideas. INFPs also find themselves needing plenty of time alone, and so responding isn’t always easy for them.

ENFPs are seen as outgoing and social people, but they do sometimes to respond to others outwardly. While ENFPs are social people they still have a lot going on inside of their busy minds, and this can sometimes leave them feeling distracted. They might consider their response inside of their minds but not fully realize that they haven’t responded in the way they think they have. This is because they have such busy and active thoughts and so the ENFP can become distracted easily.

INTJs do sometimes find it difficult to respond to people, but sometimes they simply don’t care to. When they are caught up in their own thoughts they can become annoyed by pointless chatter. They don’t respond to every question or every single person who tries to communicate with them. INTJs believe in focusing on what is important to them, and they don’t like allowing themselves to become distracted or feel guilty about their goals. They certainly have times when they don’t respond to people, either because they are doing something else or simply because they need time alone to recharge.

ENTJs do sometimes find themselves far too busy to constantly respond to people, but they try to be a social and interactive person. Sometimes when they are very focused they can ignore others, especially when their minds are working through a problem. ENTJs are better at responding than some types are, since they are outgoing and social people. They enjoy interacting and getting to know others, especially those they are interested in. For the most part ENTJs try not to ignore people, but there are occasions when they become distracted by something which is important to them.

INTPs definitely struggle to respond to people all of the time, or even some of the time. They are very easily distracted by their own inner minds, and so they don’t find it easy to respond to everyone who tries to reach out to them. They become so caught up inside of their own thoughts and when someone tries to break them from this, it can actually be a bit frustrating for the INTP. They also need a lot of time by themselves, and so they might struggle to respond to people when they are deep in their introvert mode.

ENTPs do sometimes struggle to respond to people, sometimes because they are focused on something more interesting in that moment. They become a bit distracted since their inner minds are filled with so many thoughts and ideas. When the ENTP is caught up in their own imagination and thoughts, they might struggle to be good at responding to others. Most of the time they try to connect with people though, since ENTPs are outgoing people who enjoy being able to get to know new friends.

ISTJs do sometimes find themselves focused on what they are doing and this can cause them to fail to respond sometimes. When they are working hard and don’t want to be distracted, they might intentionally neglect to respond to someone. ISTJs also need plenty of time by themselves and when they need this time they don’t find it easy to respond to those around them. ISTJs can be good at vague responses, or simply at nodding their heads in hopes that the conversation will end. They don’t do this to be rude, they simply need this time to themselves.

ESTJs do their best to respond to others, especially their loved ones. They are social and outgoing people, but that doesn’t mean they don’t have times where they need to be on their own. When the ESTJ is very focused on something they might have a hard time responding to people around them, since they want to be able to get things finished efficiently. ESTJs don’t want their loved ones to feel neglected, but at the same time they can become drained by neediness.

ISFJs don’t like neglecting or ignoring people and so they are often great at responding to them. They might feel drained by too much interaction, but the ISFJ will always do their best to push through this. They don’t like hurting the feelings of those they love, and so they will always try to respond to their questions and needs. For the ISFJ being there for others is truly important, and ignoring people feels a bit rude and even cruel.

ESFJs are often great at responding to people, especially the ones they love most. They don’t like doing anything which might hurt someone, and so they try to always be kind and polite. ESFJs don’t like feeling ignored and so they don’t want to make someone else feel this way. Even when they might be a bit drained or overwhelmed, they always do their best to respond to people even if the response is fast and to the point.

ISTPs often prefer to be on their own and can become drained by too much social interaction. Because of this desire for freedom they do sometimes struggle to respond to people. If the ISTP is out focusing on something or diving into a new hobby, they might not have the emotional energy to respond to people who are being needy or demanding. ISTPs respond when they want to or when they feel up to it, and so they might ignore people on occasion.

ESTPs try their best to always respond to others, especially the ones they care for most. They are outgoing and social people who want to be able to connect with others. When they love someone the ESTP does not want that person to feel neglected or ignored, since this is something which truly upsets them. ESTPs do their best to always respond to those around them, as long as they aren’t focused on work.

ISFPs don’t like being someone who neglects or ignores others, but there are times when they can become distracted. ISFPs are usually good at responding to the ones they love, and so they try their best not to ignore them. When they are in need of alone time though, the ISFP might struggle to respond to most people. They become drained and just need to retreat for a bit, and will likely have a hard time responding to most people around them.

ESFPs try their best to connect with people and are often very good at responding to them. Most of the time ESFPs cherish the opportunity to converse with someone and really get to know them. The only times when the ESFP might struggle to respond, is when they become distracted by something which really seems inspiring to them. They do sometimes find themselves pulled in different directions, and so on these occasions they might not be great at responding to people.