Here’s How Prone to Crying Each Personality Type Actually Is 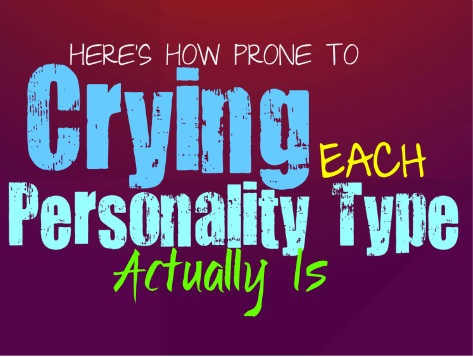 Here’s How Prone to Crying Each Personality Type Actually Is

If the hardest of people are likely to cry once in a while, but some people definitely cry more often than others. Here is how often each personality type is most likely to shed their tears.

INFJs who are trying to be strong for their loved ones, can have a hard time crying. They will often hold back tears for fear that it will upset the people around them, or make them seem like a burden. When an INFJ is feeling guarded they will likely not allow themselves to cry since they do not want to feel weak. INFJs might cry when they are alone though, and see this as a safe way to get out their emotions. When an INFJ has come to allow their functions to develop, they will likely feel more comfortable allowing themselves to cry. They are extremely sensitive to the world around them, and can become emotional overwhelmed by even the smallest sight. The matured INFJ will likely cry rather easily, and will be perfectly okay with doing this when alone.

ENFJs often hold back their tears, especially when they are in the company of loved ones. They do not want to burden others with their emotions, and will actually consider how their tears will affect other people. Instead of letting out their sadness, the ENFJ will likely bottle this up and pretend as if they are fine. They do not want to be viewed as weak or incapable, especially by their loved ones. ENFJs can be surprisingly guarded with their emotions, and simply do not feel safe exposing themselves in this way. They do sometimes cry when they feel overwhelmed or stressed, but will likely find a place where they can do this and not be seen by others.

INFPs are certainly sensitive souls, with an incredible depth of emotions inside of them. Although the INFP is often viewed as sensitive, they are not likely to cry often. Their emotions are something that is very personal and inward, which often means the INFP doesn’t feel a need to express them outwardly. They can often be sad and contemplate these feelings, without actually shedding a tear. In some cases though, the INFP becomes overwhelmed with emotion and cannot help but let it out. They might even feel like this release is healthy and a good way to make themselves feel better. INFPs might tear up easily, but that doesn’t always result in a full blown cry session.

ENFPs are extremely emotional individuals, which is actually a good thing. They are sensitive to other people, and can often tear up over a sad video or scene in a movie. ENFPs might try to appear more guarded in front of others though, and will try to hold these emotions in. They don’t want to be seen as weak, so they will often bottle up their emotions. If they feel completely comfortable with someone though, the ENFP will not try to hold back these emotions. ENFPs will tear up fairly often, but that doesn’t mean they cry all that much. They are more likely to let themselves cry if they are alone, or if they are drunk.

INTJs are not the type to dwell on their emotions, and will often bottle them up for a long time. Most INTJs do not feel comfortable with crying or any overt expression of emotions in this way. They will often attempt to hold their sadness in for a long time, until they finally boil over. INTJs will cry because they have gone far too long without allowing themselves to pay attention to their own emotions, and finally they force their way out through their tear ducts. INTJs will often attempt to keep this to themselves, and will not want it to happen in front of another person. In some cases though, if someone they care about has hurt them deeply, the INTJ simply cannot hold it in any longer.

ENTJs definitely try to remain guarded most of the time, and dislike crying in front of anyone. They will usually bottle up their emotions for so long, until finally they force their way to the surface. When the ENTJ has experienced a deep betrayal from someone they trust, they often cannot stop themselves from feeling this pain. ENTJs will try to keep their tears private, and truly don’t want to be seen as weak by others. They might feel like expressing their pain or sadness in this way, is going to make people feel like they can walk all over the ENTJ. It takes a lot for the ENTJ to trust someone enough to cry in front of them, but it truly means a lot if they reach that point.

INTPs definitely feel things very deeply, but they often try to keep these emotions bottled up inside. INTPs rarely cry, especially when they are in front of other people. Usually they will hold their emotions in and attempt to ignore how they are feeling entirely. INTPs do not want to feel weak, and they especially do not want to feel like people are judging them for feeling a certain way. They prefer to push their own feelings aside, in hopes of keeping it together and being strong. INTPs do often reach points where they cannot hold their emotions in any long, and might end up unable to hold in their tears any longer. They will usually try to hide this from the people close to them, and will rarely cry in front of others.

ENTPs who have learned to become more at ease with their emotions, will not be afraid to shed the occasional tear. They will rarely let themselves fall into complete sobs though, and reserve this for only the most tragic of circumstances. Most ENTPs put on a rather hard exterior, but are actually very warm on the inside. They care about people, which can sometimes cause them to become emotional over sad videos or movie scenes. Connecting with that emotion can cause the ENTP to feel a crack in their otherwise firm exterior. For the most part though, ENTPs only find themselves crying in extreme situations.

ISTJs rarely let themselves cry and will usually bottle up their emotions. They dislike expressing themselves in front of others, and will often attempt to remain stoic. ISTJs definitely care about their loved ones, and will work hard to provide for them. They simply don’t want to be seen as weak, and might feel far too exposed if they let themselves cry in front of someone. They are far more likely to cry when they are alone, and don’t have anyone around to judge them or misunderstand their sadness. It takes a lot for the ISTJ to trust someone enough to show their emotions openly, but if they do trust someone this much they will likely hold onto that relationship forever.

ESTJs rarely allow themselves to break down and cry. They usually prefer to keep their emotions inside, and do not want to be seen as weak by others. ESTJs might feel as if people are judging them, especially if they allow themselves to cry in front of them. They definitely feel emotions in the same way as other people, they just don’t feel comfortable outwardly expressing these feelings. ESTJs might allow themselves to tear up or cry a little in front of someone they trust deeply. They have to be sure that person will not put them down for being upset, and this is a very rare occurrence.

ISFJs are not commonly the type of people to cry easily or openly. It often takes a rather serious crisis or event to cause the ISFJ to cry in front of others. They simply keep their emotions to themselves, and rarely feel comfortable being this vulnerable in front of someone else. If they suppress their pain for too long though, the ISFJ might find themselves incapable of holding back for long. They will likely only cry when they are alone, and need to let these emotions out somehow. They never want to feel like a burden to others, which can cause the ISFJ to appear much more reserved and stoic.

ESFJs are extremely conscious of other people’s feelings, which can cause them to bottle up their own emotions. If the ESFJ feels like their tears will be a burden to those around them, they will often keep their pain to themselves. They do not want to upset someone else by crying, and so they will hold back. ESFJs can sometimes be seen as much more stoic, even though they are warm and caring people. If they feel comfortable with someone though, the ESFJ can work towards being more open. They will often become emotional over the smallest things, and will tear up when they see sad videos or hear a sad story. They simply will not express these feelings outwardly, and usually only do this when they are alone.

ISTPs are not outwardly emotional people, and will usually keep their feelings to themselves. They likely will not cry in front of others, and prefer not to let themselves break down in this way. ISTPs will usually only cry if something very serious happens, which causes the tears to be completely justified. They are logical people, and put this far above their emotions. They are not heartless though and will cry if something extremely sad happens to them or someone they love.

ESTPs definitely try not to cry often, but they can become emotional if they are under extremely stress. They will usually only cry when they are alone, or with someone they trust deeply. They will often bottle up their sadness, until it all comes pouring out. ESTPs can be a bit emotional, even though they are thinking types. They often have a hard time holding back their emotions, especially when they are overwhelmed with negative feelings.

ISFPs can be somewhat emotional people, and might find themselves tearing up rather easily. If they see something that brings out their emotions, the ISFP will rarely be able to hold back their tears. They often try to keep from crying when they are in front of others, and reserve this expression of emotion for when they are alone. ISFPs are connected to the world around them, and because of this they feel things very deeply. They are not afraid of their emotions, which means they are not afraid to cry.

ESFPs can be a bit emotional, especially if they have something causing them a lot of stress. They do not feel afraid to cry, and will often be perfectly comfortable expressing this emotion. ESFPs understand that emotions are a part of life, and do not feel ashamed to cry. If they are around people who love them, the ESFP will often be completely open. They can become saddened if they feel like they are being ignored, or if someone has been mean to the ESFP. They are sensitive souls, which can cause the ESFP to become hurt rather easily.