Here’s How Each Personality Type Feels About Politics 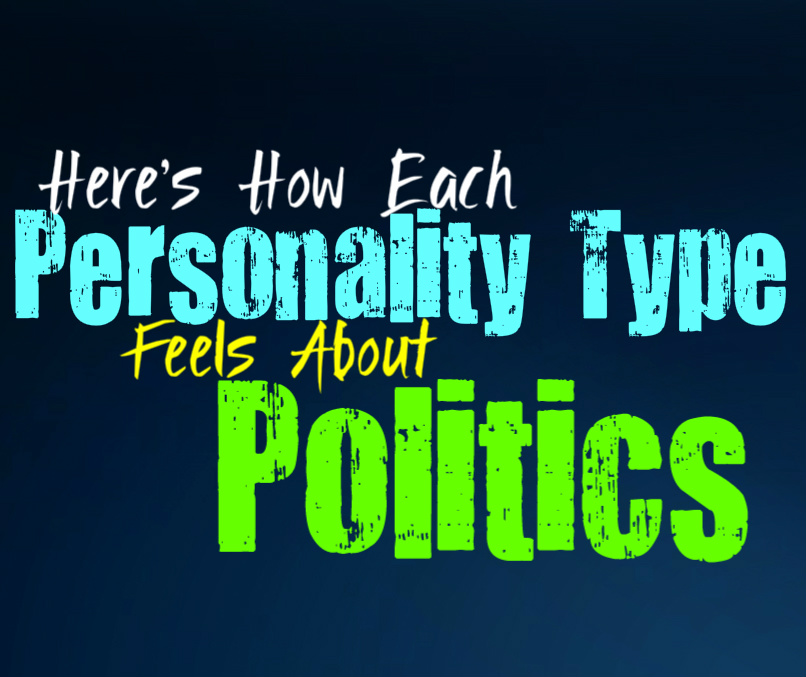 Here’s How Each Personality Type Feels About Politics

While this is always a bit of a sensitive topic, some people find it much more exhausting than others. Here is how each personality type feels about politics in general.

INFJs can become surprisingly exhausted with politics, especially when people won’t seem to stop badgering others about it. Dealing with the many dishonest politicians, and the arguments between friends, can truly cause the INFJ to feel disillusioned with the entire situation. They believe in making a difference, but are fully aware of the corruption they see in the political world. They often want to shy away from discussing politics, and can become completely bogged down by it. INFJs don’t enjoy seeing people fight over their opinions, since it often comes to quite the verbal blood bath.

ENFJs definitely believe in doing what is right, and want to motivate people to make a difference. They can become frustrated with politics though, since they are aware of the deceit that can occur. ENFJs often have their own beliefs about who to trust, and will often be aware of certain political happenings. While ENFJs don’t like to be left unaware, they can become frustrated by people who force them to share their beliefs about it. They don’t want to lose friends and cause problems with their loved ones, and they are fully aware that political discussions can cause this.

INFPs can sometimes become intense about politics, since they believe in making a difference. When they see someone is doing something that is against their morals, they will want to stand up and speak about it. They don’t want to see others hurt because of their beliefs, but can become a bit heated about it themselves. INFPs simply want people to be motivated to fight for what is right, and can become rather upset by the corruption that they see. Their inner morals are a big part of who they are, which is why INFPs refuse to back down.

ENFPs can become a bit exhausted by politics, especially when they see people arguing over it. They often have very strong beliefs about what is right and what is wrong, but don’t want to lose friends over this. ENFPs want to let other people have their own opinions, and can become upset if someone does not let them have their own beliefs as well. The simply idea of politicians can leave the ENFP sick to their stomachs, since they are fully aware how dishonest people in higher positions can become.

INTJs can become extremely frustrated with politics, since most of the politicians they see are completely idiots to them. INTJs can often see a better path for the future, but realize that most people are too foolish to follow it. They become a bit disillusioned with politics in general, and even more frustrated with most people’s opinions and thoughts regarding politics. INTJs would much rather focus on things that they can change, instead of wasting their time trying to inform people who won’t listen. They will however, expend energy teaching people who are open-minded and capable of listening.

ENTJs can become a bit irritated with politics around them, and would rather avoid those conversations with most people. They realize that people are easily manipulated, and simply want to find a way to avoid those individuals. They will have moments of speaking their opinions and trying to inform people, and are often good at presenting a commanding presence. ENTJs have strong opinions about most political situations, which comes from their own research and knowledge.

INTPs are intuitive and analytical people, who enjoy being fully aware of what is going on in the world. They will often spend time researching politicians, in order to discover who they believe is the most intelligent and effective candidates. INTPs also make decisions based on their intuition, which can be difficult for others to understand. The INTP can come up with thoughts and ideas that appear farfetched to others, since it is often a bit ahead of their time. INTPs can sometimes keep these thoughts to themselves, since they realize most people won’t fully comprehend them.

ENTPs enjoy debating, even the touchy subject of politics is not off limits to them. It can be difficult to know what their true opinions are though, since ENTPs can often play devil’s advocate. They enjoy taking the opposite viewpoint, in order to learn more about a subject and even challenge themselves and others. ENTPs aren’t afraid to speak up, and sometimes relish in a little discord. They simply want to learn more about themselves and others, and find that debate can really help make this happen.

ISTJs often have their own personal beliefs when it comes to politics, ones that come from plenty of research and facts. ISTJs aren’t afraid to debate certain political topics with others, especially if those people are receptive and intelligent. Someone who the ISTJ can actually learn from, is truly intriguing for them. They don’t want to simply argue over something if the other person is lacking in information and completely obnoxious about it. ISTJs would rather not waste their time, and will likely shut that person down fairly quickly.

ESTJs certainly don’t mind getting into arguments with people, especially when it comes to politics. They often have very strong beliefs, and try to make themselves an authority on the knowledge they have built up. They can be rather opinionated, and their conversations often become somewhat heated. ESTJs aren’t afraid to lose friends because of their personal beliefs, and prefer to have people around them who share the same values.

ISFJs can become a bit bored of politics, especially since it is a topic that can easily disrupt the harmony around them. ISFJs do not enjoy anything that causes their loved ones to argue or creates tension. Politics can quickly become a topic that turns people against one another, and is often something the ISFJ would rather steer away from. They want to keep everyone together and strive to make their loved ones happy. Politics either makes ISFJs uncomfortable, or sometimes it bores them entirely.

ESFJs can become easily exhausted by politics, even though they often have their own opinions regarding them. They can see how easily political conversations can ruin relationships, and this often bothers them deeply. ESFJs want to see people getting along, which is why the subject of politics usually bothers them. They will try to avoid having these conversations, after they have experienced people fighting over it. They don’t want to upset others, but at the same time they dislike when people go at each other’s throats for disagreeing.

ISTPs don’t mind certain political topics, and enjoy being able to observe and learn. While ISTPs are often aware of what is going on politically, they can become somewhat bored with it. ISTPs are more interested in activities that excite and thrill them, and don’t want to become cooped up. They enjoy research, but only for so long and ultimately they will want to get out and experience life. ISTPs enjoy living in the present moment, and don’t want to obsess over the future.

ESTPs can become rather frustrated with politics, and might even find the subject a bit dull. They prefer to live in the moment, and want their lives to be exciting and even a bit adventurous. While ESTPs often enjoy soaking up the moment, they do also enjoy proving other people wrong. They spend a lot of time absorbing information, and occasionally will find themselves getting into heated debates. ESTPs are excellent at remembering facts, and will sometimes unload these facts onto others.

ISFPs don’t often find themselves interested in politics, unless there is something occurring that compromises their inner morals. ISFPs do stand up for what they believe in and can become extremely frustrated by certain politicians. They also want to be sure that their loved ones have similar beliefs, at least with the things they find most important. ISFPs care deeply about the well-being of others and can become bothered if they are being taken advantage of in some way.

ESFPs rarely find themselves interested in politics and can become easily bored by them. They don’t enjoy obsessing over different political situations, especially since it can cause pointless arguments with others. ESFPs would much rather enjoy life, and want to soak up the present moment as much as they can. ESFPs want to get along with people and strive to often be the center of attention. They want to see people smiling and happy and hate anything that drags that feeling down.