Here’s How You Handle Being Disliked, Based on Your Personality Type 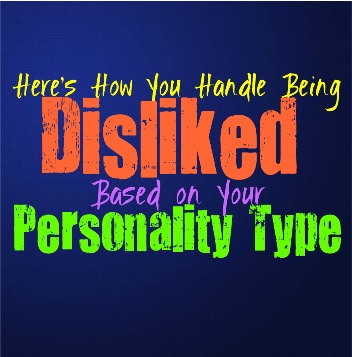 Here’s How You Handle Being Disliked, Based on Your Personality Type

INFJs do often become upset if someone disliked them, especially someone they took an interest in. This can be truly hurtful to them, and at first they might blame themselves. INFJs handle being disliked much better if they have one friends they are truly close to. If that one person appreciated them for who they are, it helps the INFJ feel less concerned with what others think. They really just need one special connection to help them feel loved, and to live in their own little world with them.

ENFJs often struggle when they feel like someone dislikes them, and might blame themselves. They are naturally people pleasers and they strive to be someone that others can rely on. ENFJs want to feel needed by those around them, and when someone dislikes them it can be upsetting. They also become bothered by this because it might affect how their loved ones see them, and it definitely will weigh heavily on the ENFJ because of this.

INFPs can often internalize their feelings, which can make it challenging when someone dislikes them. They will feel this deeply and even though they try to brush it off, it can hurt. For the INFP it is more of a struggle when someone they personally liked starts to dislike them. They don’t often care when strangers have trouble with them, since INFPs accept that they are a bit different from others. When someone they care for or like seems to dislike the INFP, it can definitely affect them.

ENFPs can have a hard time being disliked especially when they are younger. They can sometimes take this as a challenge and want to do something to make this person like them. ENFPs might take it personally and feel hurt when they are disliked and want to do whatever they can to be someone others enjoy being around. As they get older the ENFP often changes their tune on this and doesn’t allow other people’s feelings to affect them in this way. The mature ENFP stops being affected by those that dislike them, instead they focus on the people who care about them.

INTJs rarely pay much attention to people who dislike them, and don’t become all that bothered by it. They would rather focus on the people they make true connections with, instead of wasting their energy on people who don’t appreciate their company. INTJs don’t need to feel liked by others to feel fulfilled in themselves. They are focused on learning and are very internal people, with rich inner worlds that take over most of the time. INTJs do care how a select few people feel about them, but it is rare for them to let anyone in that close.

ENTJs rarely care much when someone dislikes them, especially if it isn’t someone they are close to. ENTJs have a few people they care deeply for and they don’t want disappoint them. For the ENTJ it is more about focusing on their loved ones and doing what they can to support them. They believe in loyalty and want to feel like the people in their lives will stand by them no matter what. When they have people who seem to dislike them, the ENTJ often expects that because of how aggressive they are in their lives.

ENTPs can actually become upset if someone dislikes them, but only if it is someone they personally like. If a complete stranger dislikes the ENTP it can actually be entertaining for them in an odd way. They might enjoy pushing that persons buttons and want to see just how far they can take the situation. ENTPs understand that they can’t always be liked by people, especially since they have such larger than life personalities. ENTPs push buttons sometimes on purpose and enjoy being able to debate with people.

ISTJs usually don’t care at all if someone dislikes them, especially if it isn’t someone close to them. ISTJs really only care about a select few people, and don’t need to be liked by everyone. They want their loved ones to be loyal to them, and want to feel connected to those special people in their lives. If others do not like the ISTJ they really don’t concern themselves with this and don’t feel a need to try and change their minds.

ESTJs do want to be a valued member of their community, but they rarely become upset if someone dislikes them. They care about their loved ones and work to provide for them and take care of their needs. Other than the people closes to the ESTJ, they don’t really need to feel liked by everyone else. When someone in their community dislikes the ESTJ it can be a bit of a problem, they will simply try to work around this person where they can.

ISFJs can become a bit bothered if someone does not like them, and might struggle to understand why. ISFJs are caring and giving people who don’t like to start trouble with anyone. Because of this it can be confusing and upsetting when someone acts like they dislike the ISFJ. They try to get along with everyone and want to feel like they are liked by people close to them. When the ISFJ feels like someone dislikes them they might try and change their minds, or possibly avoid this person entirely.

ESFJs can become upset if someone dislikes them, especially if this affects how their loved ones see them. They want to be someone that others can look to and depend on, and so they don’t want to be misunderstood. Sometimes ESFJs can struggle when someone does not like them, and will want to do something to change their minds. While they can become bothered if someone does not like them, ESFJs are mostly concerned with their inner circle and the people they actually care about.

ISTPs don’t often care if someone dislikes them, and they will usually just brush this off. They are often only concerned about the few people they let in, and will not focus much on what other people think. ISTPs prefer to live their lives on their own terms and try to avoid getting caught up on how others see them. While ISTPs can become upset if their close loved ones misjudge them, they aren’t really concerned about complete strangers.

ESTPs often try to behave as if they don’t care what other people think, but they actually can become upset if someone dislikes them. ESTPs want to be seen as fun and charming people, and can become a bit upset when people misunderstand them. If someone dislikes the ESTP they can take this personally and will try their best to change this situation. If things cannot be mended the ESTP will likely feel a need to vent to their friends about it, but will try not to let it bother them.

ISFPs can actually become upset if someone likes them, and might take this personally. They want to be seen as caring and fun people, which is often who they truly are. ISFPs don’t want people to dislike them and often feel like this is a very personal thing, they might blame themselves when this happens. ISFPs will ultimately try to get over this, especially if they have close loved ones who understand and appreciate them for who they are.

ESFPs actually do become upset if someone dislikes them and often want to be liked by everyone. They are fun people who enjoy living in the moment and try their best to bring everyone into the party. While ESFPs do want to be liked by everyone, they can move forward if it seems like someone is just going to continue to upset them. They want people to see them for who they are, and understand that they are caring and fun people to be around.