INTJ Post-Breakup: Dealing With The End of a Relationship 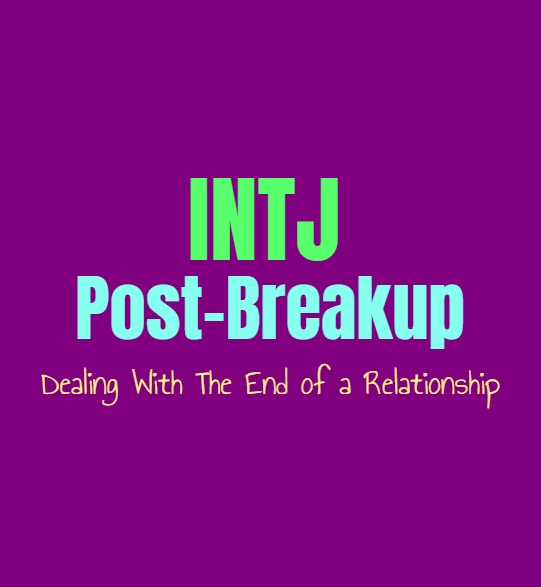 INTJ Post-Breakup: Dealing With The End of a Relationship

Enduring heartbreak is something most everyone has to go through at some point in our lives. While it is a part of life and a very common human experience, that doesn’t make it any easier to get through it. Each person has their own process and needs to go through their breakup in certain ways in order to move on and really cope with what is going on inside of them. It is important to understand ourselves better so that we can figure out the best way to heal from heartbreak.

When it comes to breakups the INTJ often has their own unique approach. They believe in moving on and making the choices that are most beneficial for their future. They don’t like allowing emotions to cloud their judgement, but that doesn’t suddenly make the pain easier to endure, it just means they focus more on the practical ways of overcoming things. INTJs do try to problem solve even when it comes to emotions and breakups, which helps them in some ways but can also be a weakness. When it comes to emotions being someone who tries to problem solve isn’t always the most beneficial way to heal and move on properly.

Naturally the INTJ tries to bury their emotions and focus more on solving the problem. They see feelings as something that needs to be fixed, not something that needs to be accepted for what they are. This can make the process a much longer one for the INTJ, since they don’t dive right into absorbing and understanding their inner emotions. Instead the INTJ tries to find solutions and answers to the breakup and why it actually ended. For the INTJ it does depend on who ended the relationship and initiated the breakup. If they are the ones who ended things, then the hardest part has likely already occurred. The INTJ most likely took a very long amount of time analyzing the relationship and tried to figure out ways to improve and make things better. They don’t want to simply end things without being sure it is the right choice and there is really no other solution for them.

If the INTJ is the one who is abandoned, they often feel differently about the situation. This is more challenging for them, especially if it seems sudden and isn’t what the INTJ wanted. They still want to find answers and will likely analyze the breakup to figure out what went wrong and how they could have been better. INTJs like to be logical about everything, even things which should be more emotional. They will likely become very reclusive and spend a lot of time distancing themselves from others so that they can process what is going on inside of their minds.

While INTJs are naturally independent and strong-willed people, that doesn’t mean they are great at letting go. They don’t particularly enjoy change and might even become anxious and uncomfortable with abrupt changes in their lives. A breakup which surprises them and hurt them deeply, is going to be something they struggle to let go of for a while. They might blame themselves or even blame the other person, but the INTJ doesn’t like feeling blindsided by this type of change. When the shock hits them it can cause them to feel overwhelmed and their emotions likely hit much harder than they are prepared for in this situation. INTJs likely become frustrated with themselves because of this, and don’t want to feel like they are struggling to let go or move on. Spending hours indulging and analyzing the situation is simply part of their process, but they do eventually need to step outside of this bubble in order to let go and move on.

While analyzing and trying to problem solve are the go to responses for the INTJ, they aren’t necessarily the healthiest. They feel things deeply, but have a tendency to try and ignore these emotions in favor of being logical and practical. When they experience a breakup which is truly heartbreaking for them, it is important for the INTJ to take the time to process their inner emotions. They need to really allow themselves to feel every part of it, without trying to find solutions or figure out why they are experiencing these emotions. Not everything needs an answer or a solution, sometimes emotions exist without needing to have a valid explanation for them. This might make the INTJ uncomfortable at first, but it is an important step in healing and moving on from this painful experience.

The INTJ who goes through a traumatic breakup might find themselves in their shadow, but that isn’t the worst thing possible. Taking this time to explore other parts of themselves and just allowing themselves to break down a bit, can actually be useful in the healing process as well. The INTJ in their shadow can be much more emotionally reactive and even a bit more adventurous. This can be unnerving for the people around them, but they need understanding during this time. Eventually the INTJ will come back to themselves, likely by spending time researching and learning how to overcome their breakup and feel more comfortable in their own skin once again. The final stages of their grief often involves personal growth and adaptation. Learning how to better themselves and dive into new hobbies can really help the INTJ to heal and move on from their heartbreak. Spending time researching is one of the more natural things for the INTJ, and can actually be useful when it comes to breakups. Understanding why they feel a certain way or what makes them respond how they do, is something which brings clarity to the mind of the INTJ. They need some sort of answers and ways to move on, especially knowing that they aren’t alone in this. INTJs can feel different from most people they encounter, and so sometimes they need a unique approach for healing and growth.