How Punctual Each Personality Type Actually Is 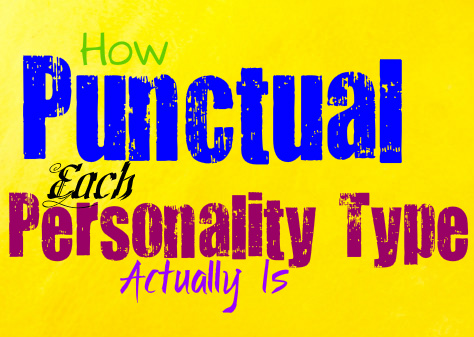 How Punctual Each Personality Type Actually Is

Some people are always early, while others are never on time. We all have that friend who struggles to show up to events, and some of us can become rather frustrated by this. Here is how punctual each personality type most likely is.

INFJs often hate being late to anything, and might feel like it is rude or inconsiderate. They understand if there is a legitimate reason for being late, but dislike if it is done purely out of flakiness. INFJs live so much in their own inner worlds that it can sometimes be difficult for them to remain focused- but they still put forth the effort. They will likely be on time or even early for work and specific events that are important to them or those closest to them. INFJs simply hate when people make others wait on them, and don’t want to be seen as this kind of selfish person. They want to make a positive impression and because of this they might even be the person who shows up way too early. INFJs simply dislike being self-centered and making people wait on them most of the time.

ENFJs are rarely late, and might become frustrated if other people don’t show up to events on time. They believe that being punctual is important and shows a level of consideration for other people. They would feel extremely guilty for showing up to an event late, and would only do so if they have a serious reason for it. ENFJs try to give people the benefit of the doubt, but will have a hard time refraining if someone shows up extremely late. ENFJs perfectionist nature can cause them to focus rather hard on their schedule, which makes them push themselves to ensure they are always on time for events.

INFPs have a tendency to run through a million different thoughts in their minds, which can be the cause of their occasional lateness. Some INFPs will actually hate the idea of being late, simply because they want to avoid those awkward situations. If showing up on time will help them draw less attention to themselves, the INFP will likely put forth the effort to be punctual. On the other hand, if showing up late will help them avoid an awkward entrance, the INFP will do this as well. Their actions are more intentioned than many people think, and they are often aware of what they are doing. There are some occasions though, where INFPs struggle to keep track of the time and will be late to certain events. It is simply because they become distracted and don’t realize that so much time has passed.

ENFPs struggle with time management and can become distracted rather easily. They do not show up late because they do not care about others feelings- they simply struggle to pay attention to one simple task. ENFPs will become distracted by so many things around them, and will likely believe that less time has passed than it actually has. They often will scramble last minute in an attempt to show up on time, but this likely fails. ENFPs have so much going on inside of their minds, and often have a million ideas boiling over. Their thought process can sometimes cause them to become distracted and lose track of the time. Thankfully their charismatic personalities often help them get out of sticky situations.

INTJs often hate the feeling of being late, especially for something they deem important. They will force themselves to be a few minutes early, just to ensure that they are on time. If they have decided upon a clear time with others, then the INTJ will respect that prior decision. They will likely dislike being the person who is disrespectful and will show up early just to be sure. If the INTJ feels like there was not a clear time set, then they might become frustrated and show up late on purpose because of this. They will decide if something is worth showing up on time for, and if it isn’t then they might be late intentionally. INTJs usually prefer to be early though, and dislike the idea of being the “late person”.

ENTJs are often great at time management when they believe that it is important. They might even consider it embarrassing to be late to certain events or gatherings. ENTJs are perfectionists, and often struggle when it comes to failing at anything. This desire to succeed will likely make being on time an important thing for ENTJs. They will make sure to be punctual for events that truly matter, like work events or gatherings with people that they truly care about. ENTJs value work very much, but they also value their loved ones. If they feel like someone in their life is important, then they will take the time to put forth an effort and will not leave that person waiting on them. Because of this extra effort, the ENTJ will likely become frustrated by people who do not respect them by showing up late.

INTPs often struggle with being on time for things, and will easily lose track of time. INTPs have rich inner minds, and are often distracted by a million different thoughts inside of their heads. This can cause the INTP to struggle with time management, causing them to be late often. It is not from a lack of consideration, but simply comes from disconnection from the physical world. The fact that INTPs are more wrapped up in their thoughts than they are their physical surroundings, makes it rather easy for them to forget what time it actually is. They may believe only moments have passed, when it reality hours have gone by. INTPs will certainly make a strong effort for the people they care about, and will feel guilty if they fail to accomplish something.

ENTPs are not excellent with being on time, and might struggle to see the reasoning behind it. ENTPs prefer to live life on the edge, and because of this might find punctuality to be a waste of their energy. They can often discern whether something is important or not, and will make extra effort to be on time for certain events. In most cases though, the ENTP will become far too distracted by other things to show up on time. They are constantly running over different thoughts and ideas, and can quickly bounce from one thing to another. This is usually the reasoning behind the ENTPs lack of punctuality, and will make perfect sense to them.

ISTJs are almost always early for just about every event that they attend. They dislike the idea of being late and might feel like they have failed if they do not show up on time. Because of this desire to be successful, the ISTJ will likely push themselves to be early for most things. ISTJs are usually respectful people, and dislike the idea of making other people wait on them for anything. They don’t want to be seen as inconsiderate, and being late is likely a sign of this. Being late is likely very embarrassing for ISTJs, so they will make an effort to manage their time properly.

ESTJs are usually great at time management, and will likely hate the idea of being late for anything. They will likely plan ahead and leave early for most of their appointments and events. ESTJs likely consider being on time as unacceptable, and will try to be at least a few minutes early for everything. They are direct individuals, and prefer to be efficient and pragmatic in their actions. ESTJs will likely become annoyed with people who show up late and hold them up for certain events. If the ESTJ needs extra time to get ready, then they will likely wake up early in order to arrive on time.

ISFJs are rarely late for anything, and might see this as a sign of disrespect. They are extremely considerate of other people’s feelings, and because of this the ISFJ will be sure to be on time. They are great at time management, and will allow themselves extra time to get ready for things. ISFJs will plan ahead in order to ensure that they do not show up late. They do not want to disrespect others, and might feel embarrassed if they are late for anything. They will likely show up to appointments and events early, just to be sure that they are not late.

ESFJs usually hate the idea of being late for things, and will become stressed if they are running short on time. They will scramble and push themselves to ensure that they do not end up late. ESFJs might see this as a sign of disrespect, and will become upset if other people think they are being rude. The ESFJ will likely be the person who shows up ridiculously early for certain events and will never be the person arriving late. ESFJs might even mentally prepare themselves, and try to keep track of the time accurately in their minds.

ISTPs sometimes struggle to see the importance of being on time, and dislike being forced to fit into a tight schedule. They enjoy their freedom, and don’t want to feel rushed or pressured by others. ISTPs also dislike being disrespectful though, and will show up on time if it is important to a loved one. Other than those rare occurrences, the ISTP will likely be late for certain events. They don’t do this on purpose, but simply become distracted by what is directly in front of them. Their desire to live in the present moment, causes the ISTP to dislike being forced to pull away from something.

ESTPs can sometimes struggle with time management, since they live so much in the present moment. They might struggle to see the reasoning behind always being on time, and would prefer to live their life how they please. ESTPs likely become upset if they are late for important events, but this doesn’t stop them from showing up a few minutes after things have already begun. ESTPs simply become distracted by a million other things around them, causing them to lose track of time.

ISFPs can often struggle with being on time, simply because they become distracted by their surroundings. ISFPs live very much in present moment, which can make it hard to focus on time management. They will likely become intrigued by something, and have a hard time pulling themselves way from it. ISFPs do not like being late if it will put them on the spot, and will strive to avoid awkward situations. If they do see that they are going to be late, they might not even show up for fear of being called out.

ESFPs can sometimes struggle to show up to things on time, especially if they find something else they believe is more important. ESFPs will try very hard to be on time to certain events though, especially events for people they love. They simply become distracted by other things in their environment, and sometimes struggle to manage their time properly. ESFPS will work hard to be on time for their loved ones though, and dislike feeling like they let anyone down.