Here’s How Domineering You Are, According to Your Personality Type 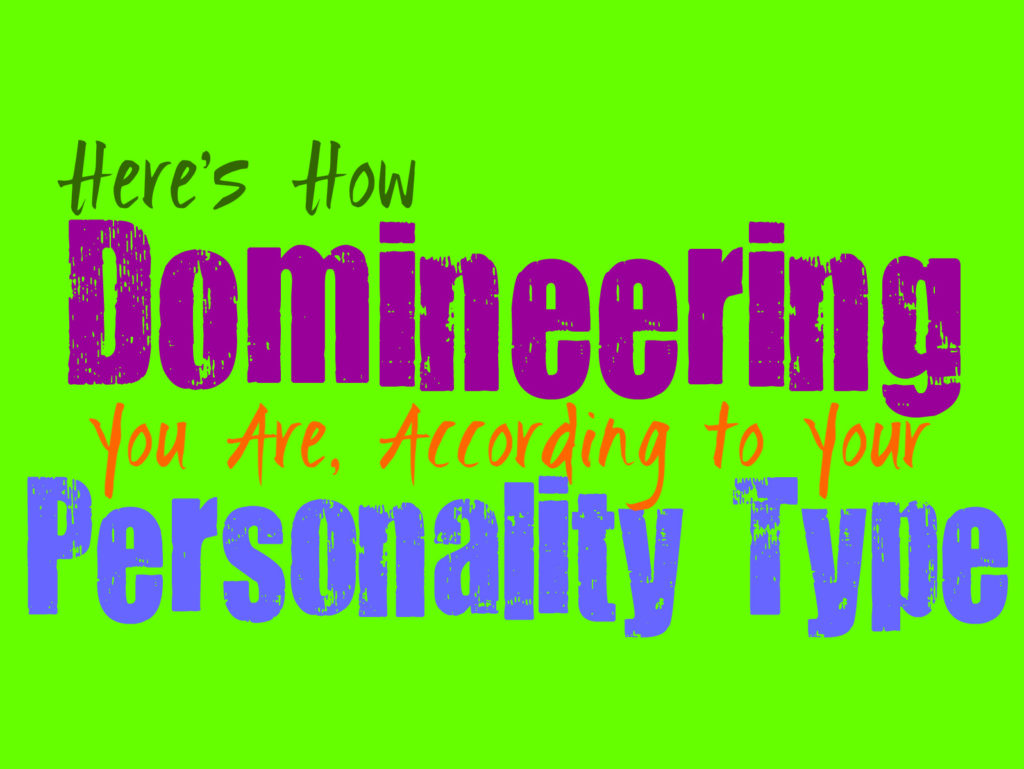 Here’s How Domineering You Are, According to Your Personality Type

Some people are naturally dominant individuals, but others do this in a rather aggressive way. While there are some people out there who simply seek to live their lives with a sense of peace. Here is how domineering each personality type can be.

INFJs are definitely not domineering people, especially when it comes to social settings. They don’t want to be too pushy, and prefer to give people their space. INFJs want to let people be themselves, without feeling intimated by someone else. They don’t want to ever make someone feel small, so INFJs are comfortable taking a step back. They don’t like to take charge, since the INFJ is usually inside of their own inner minds running through many different ideas. They can become a bit aggressive and dominating, if someone else is attempting to push someone around. INFJs aren’t afraid of taking charge, they simply prefer not to live their lives that way.

ENFJs enjoy making people happy and don’t want to upset or harm people. Although ENFJs are tender and loving people, they do have domineering tendencies. When it comes to getting things done, ENFJs are not afraid of taking charge in order to make sure things actually happen the right way. They aren’t likely to push people around in an upsetting way, since they are actually great at motivating people naturally. Their charismatic and friendly personalities really help the ENFJ keep a leadership role without causing any discord. They are capable of being rather dominant people, but they do it without trying to upset people.

INFPs are very internal and gentle people, who prefer to keep to themselves most of the time. INFPs are usually not domineering people, and enjoy letting other’s do their own thing. They don’t want to be viewed as controlling or pushy, and would much rather take a step back. INFPs aren’t usually seen as leaders, since they don’t like the feeling of taking charge of other people. INFPs don’t want to be seen as intimidating, although they can become that way if necessary. Ultimately INFPs prefer to keep to themselves, making them more introspective and private people.

ENFPs are definitely strong-willed people, who do have a somewhat domineering side. In most cases the ENFP would rather go with the flow and enjoy life as it comes at them. They don’t want to be seen as too pushy, since ENFPs prefer to remain positive. They do have times where they realize they need to take charge of the situation, and can be rather intimidating when this happens. ENFPs are usually capable of being dominant without upsetting people too much, since they are charismatic and likable people.

INTJs are independent and strong people, who like to do things their own way. When it comes to getting things done, INTJs actually can be a bit domineering. They don’t try to be intimidating, but sometimes their natural intelligent and desire for accuracy can be a bit intense for people. INTJs know how to take charge when it is necessary, and can be rather dominant people. They aren’t afraid of being in this position, and are perfectly capable of willing to take charge. As long as the INTJ is helping people learn and helping better their own minds, they are will pleased to be in charge.

ENTJs are natural leaders, and are more than capable of taking charge of a situation. They do have somewhat domineering personalities, since they ENTJ enjoy being able to take control. They don’t intend to appear arrogant with their leadership, but sometimes their take charge attitude can be a bit intense. ENTJs are naturally dominant people though, and do best when they are capable of monitoring how things are being done. They value efficiency above everything else, and want to ensure that everything is being done properly.

INTPs are generally not domineering people, since they prefer to take a less aggressive approach. They do want to make the proper information known, since they crave precision. INTPs simply don’t want to be overly domineering in order to express the facts and educate people. They can be a bit intense to other people, but that is simply their natural personality mostly because the INTP has such rich and active inner minds. INTPs have moments where their desire to be accurate can cause them to become somewhat domineering and forward in a situation. In most cases though the INTP prefer to take a step back and simply observe things from a distance.

ENTPs are generally not domineering people, and prefer to just do their own thing. They are independent and intelligent people, who believe in diving into what life has to offer. They enjoy taking on new challenges, and absolutely love seeking out the many possibilities around them. ENTPs can certainly take charge if they have to, and might become a bit aggressive when someone is not paying attention to something important. When the ENTP values something they want to be sure that other people do not step on or disrespect that. For the most part though ENTPs prefer to have their own space and don’t want to invade the space of others.

ISTJs are hardworking and focused people, who prefer to keep to themselves. Most of the time ISTJs just want to have their own space to get done what needs too be done. They don’t want to be pushed around by people, but they also have no desire to be bossy towards others. ISTJs much prefer to have independence and space to get their work done and improve themselves. There may be moments where the ISTJ can be a tad domineering, especially when they feel like people are not taking things seriously. ISTJs simply value work ethic and morals, and become frustrated if people are too flighty and inconsiderate.

ESTJs are focused and intense people, and can sometimes be a bit domineering. They have a hard time taking a backseat to others, and are best suited as leaders. ESTJs can become frustrated with inefficiency, so they desire to ensure that everyone does things correctly. They can be a bit hard on others when they are trying to get tasks finished properly, simply because they know how they want things done. ESTJs prefer to take charge to ensure that everyone is following orders and working their best. Their natural personalities are certainly dominant, and less likely to submit to someone else’s demands.

ISFJs are definitely not domineering people, and in many cases are more submissive. They want to make other people happy, and truly hate any kind of discord. ISFJs would rather keep the peace and work hard to maintain a sense of harmony in their environment. They don’t want to see people feeling uncomfortable in their presence and would rather be liked by their community. ISFJs are kind and loving people, who are constantly tending to the needs of others. They aren’t afraid of letting someone else take charge of a situation, but can become aggravated with people who have an arrogant attitude.

ESFJs are generally not domineering people, since they prefer to keep the peace. They don’t want to be seen as pushy, but they do have the occasionally bossy tendencies. ESFJs simply want to get things done, and have some high-strung parts to their personality. They enjoy doing everything they can to take care of their loved ones, and focus mainly on tending to their needs. ESFJs are loving people, and generally don’t like being too aggressive towards others.

ISTPs are certainly not domineering people, and prefer to keep their space from others. They enjoy having a sense of independence, and certainly don’t want too push other people around. They would much rather allow people to do their own thing, without putting any kind of pressure on them. ISTPs mind their own business most of the time, and are logical and analytical people. ISTPs are precise people who enjoy learning information and analyzing it on their own. They do sometimes enjoy information people, but they won’t waste their time if they aren’t receptive to it.

ESTPs are outgoing and friendly people, who enjoy living in the present moment. They do have times where they can seem a bit domineering, especially when they are trying to inform someone. ESTPs remember a lot of facts and information, and can become frustrated with ignorant people. They simply want to inform them and help them learn, but when someone is not receptive the ESTP can appear a bit aggressive and pushy. They do have somewhat dominant personalities, but can be submissive towards certain loved ones.

ISFPs are certainly not domineering people, and prefer to live a much more carefree lifestyle. They enjoy living in the present moment, and simply want to absorb the beauty in the world around them. ISFPs enjoy following their heart, and simply want to feel free to do so. They are not pushy or controlling people, they simply want to live their own lives in harmony. They want people to give them space to be themselves, and at the same time the ISFP does not want to try and control others.