How You Handle Being Replaced, According to Your Personality Type 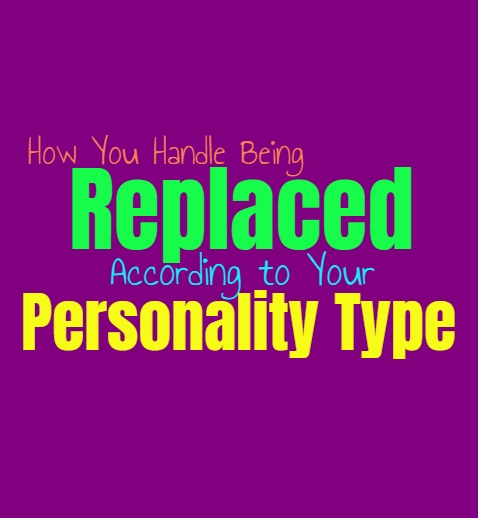 How You Handle Being Replaced, According to Your Personality Type

Some people can cope with feeling replaced, since they do their best to simply move on from the situation. Others struggle to really deal with this feeling, even if they have moved on themselves. Here is how you handle feeling replaced, according to your personality type.

INFJs definitely don’t handle feeling replaced all that well, even with someone or something they love disconnected from. Feeling as if they can simply be replaced either in the workplace, or in a relationship, makes them feel deeply hurt. They want to feel like they are important to someone, even after the connection has been severed to some extent. INFJs don’t want to feel ignored or like they lack significance to others. Being replaced quickly can feel like it taints what they once had, it makes them feel like they didn’t matter enough to wait.

ENFJs definitely don’t enjoy feeling as if they have been replaced, especially if this happens relatively quickly. They might realize that eventually their previous position needs to be filled, but they don’t want to feel  as if they have been replaced. ENFJs want to feel like they still hold a special place in the hearts of those they loved, even if they are no longer connected to them. When the ENFJ is replaced it often makes them feel like they connected they once shared is meaningless, as if that person doesn’t truly value what they had.

INFPs really don’t like feeling as if they have been replaced, but most of the time they want to find connections and relationships which can avoid this entirely. When the INFP cares for someone they don’t want to just cut them from their lives, and so they want to always feel important to them to some extent. Feeling as if they have been replaced often means the INFP can struggle to move on entirely, since it makes them feel as if their connection was never truly valuable to that other person.

While ENFPs don’t appreciate being replaced, they do their best to move on when this happens. When they feel as if someone is replacing the ENFP, they will want to do the same thing in return. They try to disconnect from this person in hopes of moving on and forgetting that they have been replaced. ENFPs don’t like dwelling on these things, since they would rather move forward and find a new connection which they hope will be lasting and truly meaningful.

INTJs certainly don’t appreciate feeling replaced, especially not if it occurs easily and quickly. At the same time, they want to move on when a connection or position isn’t right for them. For the INTJ it doesn’t usually feel necessarily or logical to dwell on something like this, instead they want to think about themselves and where they need to be. If they are replaced it can be frustrating at first, since INTJs want to be someone who performs better than most and is not easy to replace. At the same time they are good at moving on and figuring out the means of getting over these things.

ENTJs do their best to move on when they feel as if they have been replaced, since they don’t want emotions to stand in their way or control them. For the ENTJ being replaced can make them feel as if they have failed in some ways, but at the same time they are good at picking themselves up and moving forward. ENTJs will likely seek to prove themselves after being replaced, wanting to show everyone that they aren’t really someone who can be compared to others and that they will always improve themselves.

INTPs don’t usually find themselves focusing on whether or not they have been replaced, unless they still care for someone or regret having to move on. INTPs are capable of letting go most of the time, especially if they feel it is the right thing to do. If they are replaced by someone they no longer care for, or replaced in a job position they disliked, then the INTP is often capable of forgetting about this. However, if they are replaced by someone they still care deeply for, then this is something which will continue to plague and bother them.

ISTJs really don’t appreciate feeling as if they have been replaced, since this can feel like a failure in some ways. They believe in committing to people and things in life, and so when they are replaced it somehow means they have failed that commitment. ISTJs do their best to move on though and want to find a way to improve and make things better the next time around. At first feeling as if they have been replaced can certainly sting a bit, ISTJs don’t like keeping themselves stuck because of it.

ESTJs do struggle if they have been replaced, since for them this often feels like a failure. They want to be able to hold onto their commitments in life, and being replaced shows they have failed to really do this. For the ESTJ this failure can be something they struggle with for a bit and they often try to find ways to fix it. If they realize it is impossible to really make things right, then they will do their best to let go and just move on from the situation.

ISFJs definitely don’t appreciate feeling as if they have been replaced, even if they have moved on themselves. Sometimes this can feel as if their past relationships are tainted, since it feels like they didn’t truly matter if someone can replace them. ISFJs want to feel important and want to believe they are someone that people want to hold onto. They care about their commitments and so they don’t want to reach a point where they have to be replaced.

ESFJs definitely have a hard time dealing with the notion of being replaced, especially when they still care about the person who is replacing them. ESFJs can also feel like they have failed in some ways when this occurs, since they value their commitments and don’t want to be someone who can easily be replaced. For the ESFJ it can be a blow to them if they can be replaced, especially if it seemed to occur without much trouble at all.

ISTPs really don’t like dwelling or holding onto the past, and so they can often cope fairly well with being replaced. For the ISTP it feels pointless to let themselves become upset if they have been replaced, instead they just try to move on. ISTPs will likely replace that person as well, in hopes of filling the space and not allowing it to get to them too much. Of course they do feel upset about this when it comes from someone they cared for, but they try their best to move forward.

ESTPs certainly don’t like feeling replaced, especially when they still have feelings or care for that person. They want to feel as if they are important and valuable to others. For the ESTP being easily replaced makes them feel like they are being forgotten or as if they never truly mattered. They do their best to move on though and usually just search for distractions which will help them get over this.

ISFPs really don’t like feeling as if they are being ignored or forgotten, and so being replaced can be difficult for them. Most of the time they can move on from this though, especially if they don’t entirely hold feelings for the person replacing them. If the ISFP is being replaced by someone they have personally moved on from, they can let go of this. If it is someone they are still close to or care for, then the ISFP takes this as a serious blow.

ESFPs really hate being ignored and because of this they don’t appreciate feeling as if they have been replaced. ESFPs want to feel like they are always valuable and important to those around them. They want to feel like they are difficult to ever truly replace, even when they have moved on from this relationships or situation entirely. ESFPs want to be someone who holds a special place in the lives of those they get close to.