Just How Secretive You Are, According to Your Personality Type 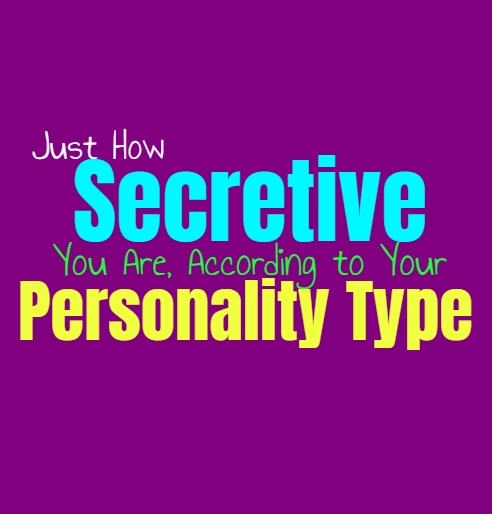 Just How Secretive You Are, According to Your Personality Type

Some people are naturally private and because of that they can be a bit secretive. They don’t enjoy sharing things with others and sometimes want to keep information completely to themselves. Here is how secretive you can be, based on your personality type.

INFJs can certainly be secretive people, mostly because they are so private. They keep things to themselves and don’t always feel safe sharing their information with others. They can keep a lot inside not wanting to burden anyone, but also struggling with the issue of trust. When the INFJ does feel like they are close to someone they will feel more comfortable opening up and sharing their personal secrest. Most of the time though, they can be fairly secretive people, separating parts of their world from certain people.

ENFJs can sometimes be secretive people since they don’t always feels comfortable opening up or sharing. When they become secretive it is simply because they want to be sure they can trust someone before really sharing things. ENFJs do sometimes struggle to keep secrets for too long though, since they want to have someone they can really open up to and share themselves with. They don’t like alienating themselves, and deeply want to feel connected to those around them.

INFPs do sometimes seem secretive, since they have moments where they keep to themselves. Most of the time though INFPs enjoy being able to have someone to share their deepest fears and secrets with, and sincerely want to open up. INFPs don’t like harboring these secrets and so they want to be more open and feel comfortable sharing with someone. While they might not want to expose themselves to everyone, they do believe it is important to have people in their lives they can be more open with.

ENFPs aren’t naturally secretive people, and so they don’t feel the need to keep everything bottled up. They want to have people they can share things with, and enjoy feeling comfortable around certain people. For ENFPs it is best to be an open person, since bottling things up feel unnatural for them. They don’t find it easy to keep secrets most of the time, especially around people they love and care for. For the ENFP being overly secretive can feel dishonest and they value being honest.

INTJs can sometimes be secretive people, since they don’t feel the need to share everything with others. INTJs keep a lot to themselves and actually enjoy spending time alone in most instances. They don’t usually feel comfortable sharing their secrets and prefer to keep these things to themselves. For the INTJ it isn’t about hiding things, it is about having a sense of personal space and independence in their lives.

ENTJs can sometimes be secretive people, since they don’t trust or open up easily. They often keep things to themselves because they are unsure of how people will respond. When then ENTJ has secrets it is often because they also have trust issues, and so they don’t always feel like it is the smart choice to share with people. ENTJs are also independent people who sometimes feel like there isn’t much of a need to expose their secrets or burden others with what is going on inside of them.

INTPs can certainly be secretive people, mostly because they keep a lot inside. They don’t feel comfortable sharing with most people, and can even struggle to open up to those they trust. INTPs are independent people who can often keep secrets to themselves without fully realizing they are doing this. They don’t feel this natural need to share everything, mostly because they are so internal with their thoughts and even their feelings.

ISTJs value honesty with their loved ones, so they are less secretive and more private. When it comes to strangers the ISTJ doesn’t feel the need to share everything with them, and would much rather keep to themselves. For ISTJs it is about being independent and not needing to expose every aspect of their lives to people. They will share important things with their loved ones and don’t feel like being secretive around the people they care for most.

ESTJs can sometimes appear secretive but this is often because they don’t trust or open up easily. It isn’t necessarily about keeping secrets, most about finding the right people to share them with. When the ESTJ is close to someone and trusts them completely, they will be much more open and honest with them. They do sometimes feel the need to keep certain secrets, especially if this information might be harmful in some ways.

ISFJs can sometimes be a bit secretive since they don’t feel comfortable burdening others. They keep a lot to themselves because they feel a strong need to solve their problems and the problems of those around them, without making a big fuss about it. For the ISFJ being secretive sometimes comes from a desire to be the strong person, the one who takes care of everyone and everything. They do believe in being honest, but they can sometimes struggle with really opening up.

ESFJs can sometimes appear secretive since they really don’t want to burden others with their problems. They keep a lot to themselves so that they don’t weigh others down with their thoughts and feelings. Most of the time ESFJs want to feel comfortable sharing with others, but they can be afraid of how they will respond or what might occur because of their sharing. ESFJs care about their loved ones and work hard to take care of them, which sometimes makes them more secretive without really intending to be.

ISTPs can appear secretive, but this mostly because they keep to themselves. They don’t feel the need to share every detail of their lives or the inner workings of their minds. They sometimes prefer to be secretive because they don’t really want to expose themselves to people unless they trust them fully. ISTPs are independent people, and because of this they can appear rather mysterious and secretive.

ESTPs try not to be secretive with the ones they trust and are close to, instead they enjoy sharing with them. It can actually be difficult for the ESTP to keep secrets from certain people, and so they want to open up and share everything with them. They might be able to keep secrets from people when they don’t want to get into trouble, but even then it can be challenging for the ESTP to keep things inside.

ISFPs can sometimes be secretive people when they are trying to avoid getting themselves into trouble. They often have certain people in their lives who they don’t feel comfortable hiding things from, and so they often share all of their secrets with these special people. ISFPs enjoy being open and honest people and for them keeping secrets and feelings bottled up can be rather toxic.

ESFPs don’t really like being secretive and might even struggle when they try to be. They are open and outgoing people and often find themselves sharing information without even meaning to. For the ESFP keeping things inside is truly difficult, since they are social and interactive people. When they care about someone they want to feel comfortable sharing with them and enjoy being completely open and honest.