Are You Someone Who Tries to Fix People, Based on Your Personality Type 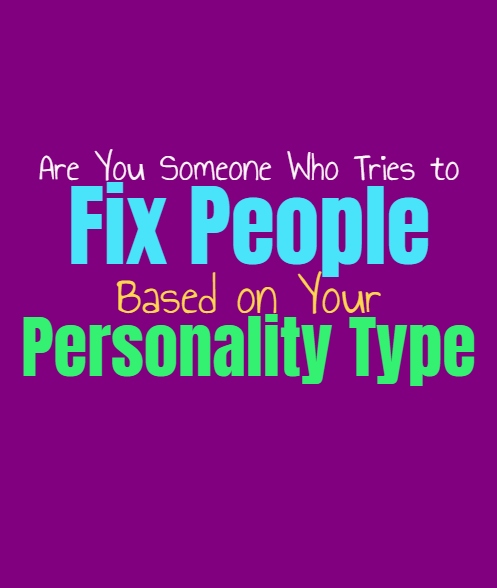 Are You Someone Who Tries to Fix People, Based on Your Personality Type

Some people have a tendency to seek out others who seem helpless or in need, and they try to fix them. This can be an unhealthy behavior, but it can also come from a strong desire to help others. Regardless of intentions there are some personality types who might be more prone to fixing others. Here is how likely you are to try and fix people, based on your personality type.

INFJs are certainly the types of people who seek to fix those around them. They might not even do this intentionally, just naturally finding themselves wanting to help and make a difference. Their strong sense of empathy can draw them towards people who are in need of saving or of help in some way. INFJs don’t always notice this about themselves, but they do tend to be drawn to people who are a bit broken and in need of someone to pick them up. This can sometimes be a good thing, but other times it gets the INFJ into toxic and painful relationships.

ENFJs are compassionate and empathetic people, which does sometimes draw them towards others who are in need of help. They might seek to fix people who seem to be in pain and really need the help. Sometimes ENFJs find themselves trying to fix people who haven’t quite asked for this, simply because they want to help them improve their lives and situation. This can sometimes get the ENFJ into tricky situations with others, and may even lead them towards toxic people who seek to take advantage of their help.

ENFPs don’t really like the idea of changing or fixing people, since this loses a sense of romance for them. They want to be with someone they accept wholly, and they want this in return. For the ENFP starting a relationship with the goal of fixing or changing someone seems insincere and like a waste of their time and energy. They aren’t likely to go out of their way to change someone, especially since they don’t like the feeling of having someone try and fix them either.

INTJs usually don’t seek to fix people, instead they prefer to find people who are willing to grow themselves. They want people in their lives who are willing to work on themselves and change for the better. INTJs realize that seeking to fix someone is a waste of their time and their energy, and likely won’t turn out the way they would hope. For the INTJ it is more rewarding to be around people who enjoy growing and changing for the better, and they are willing to help but they don’t seek to fix them.

While INTPs are logical people there are times when this actually causes them to seek out people they need to fix. They might feel like they can analyze a person and find ways of helping them improve their lives. INTPs don’t necessarily do this on purpose, but sometimes they take on the challenge without realizing they are doing it. Sometimes the idea of being capable of fixing someone, can feel deeply rewarding for the INTP and this can get them into sticky situations.

ENTPs don’t intentionally find themselves trying to fix people, but they do have a tendency to take on the challenge. They might be intrigued by the idea of analyzing a person and finding ways to make them better or fix whatever is “wrong” with them. ENTPs can be curious people and this is certainly something which gets them into trouble from time to time. When it comes to fixing people the ENTP might not entirely realize they are trying to do this, but it does happen occasionally.

ISTJs do sometimes find themselves in situations where they are trying to fix people, mostly because they are caretakers. ISTJs want to be able to provide for their loved ones and so they do enjoy feeling needed. When someone they care for is failing the ISTJ often finds themselves stepping in and trying to fix whatever is going wrong with them. They may not do this in an emotional sense, but more in a practical way of fixing or helping someone.

ESTJs don’t necessarily intend to fix people, but they do sometimes find themselves trying to do this. They are naturally focused on providing for their families and want to be able to take care of the practical needs of their loved ones. This desire to always be there and be the provider, can cause the ESTJ to seek out ways to fix someone who is in need. They might try to be the problem solver and find ways to make someone’s life better and more efficient.

ISFJs are caretakers by nature, and their strong sense of empathy does often lead them towards fixing people. ISFJs might unintentionally seek out people who need to be fixed or who are in need of help. This can be a good thing but sometimes it causes the ISFJ to connect themselves with toxic people who simply want to use them for their help and kindness. ISFJs do their best to help others but sometimes this can become a desire to fix people as well.

ESFJs do sometimes find themselves wanting to fix others, mostly because of their strong sense of empathy. They might find themselves drawn to people who are in need of their help or who seem to require someone who can fix them. They want to make a difference in the lives of others and dislike seeing anyone who is in pain. Since ESFJs do sometimes want to help or fix people who are in need, this can sometimes get them into relationships with people who seek to take advantage of this empathy.

ISTPs really don’t care to fix people, since this often seems like a waste of time and energy. They would rather be around people who they care for just the way they are, and don’t enjoy the idea of having to fix or help someone. ISTPs can certainly be helpful when someone they love need it, but that doesn’t mean they want to fix this person. For the ISTP this can seem illogical and foolish, since they realize people cannot be changed by the actions of someone else.

ESTPs do sometimes find themselves drawn to people who appear to need fixing, but that doesn’t mean they will try to do this themselves. ESTPs just are naturally drawn to the people who might need help or someone who can solve their problems. Mostly because ESTPs cannot naturally find themselves interested in the easy road, this often feels a bit too boring for them and their lifestyle.

ISFPs care deeply about others but sometimes they do find themselves drawn to people with immense flaws. This doesn’t mean the ISFP necessarily wants to fix this person, but they might hope that they will be willing to change for the ISFP. They can be romantics at heart which sometimes draws them towards people who who need help or compassion. ISFPs don’t do this on purpose, they simply follow their hearts even if that means going towards someone who might not always be good for them.

ESFPs aren’t really interested in the idea of fixing people, since they don’t want to change those they love. ESFPs just want to find people who will let them be themselves and who will accept them no matter what. ESFPs do want to help their loved ones be happy, but that doesn’t mean they want to fix them or make them into something they are not.