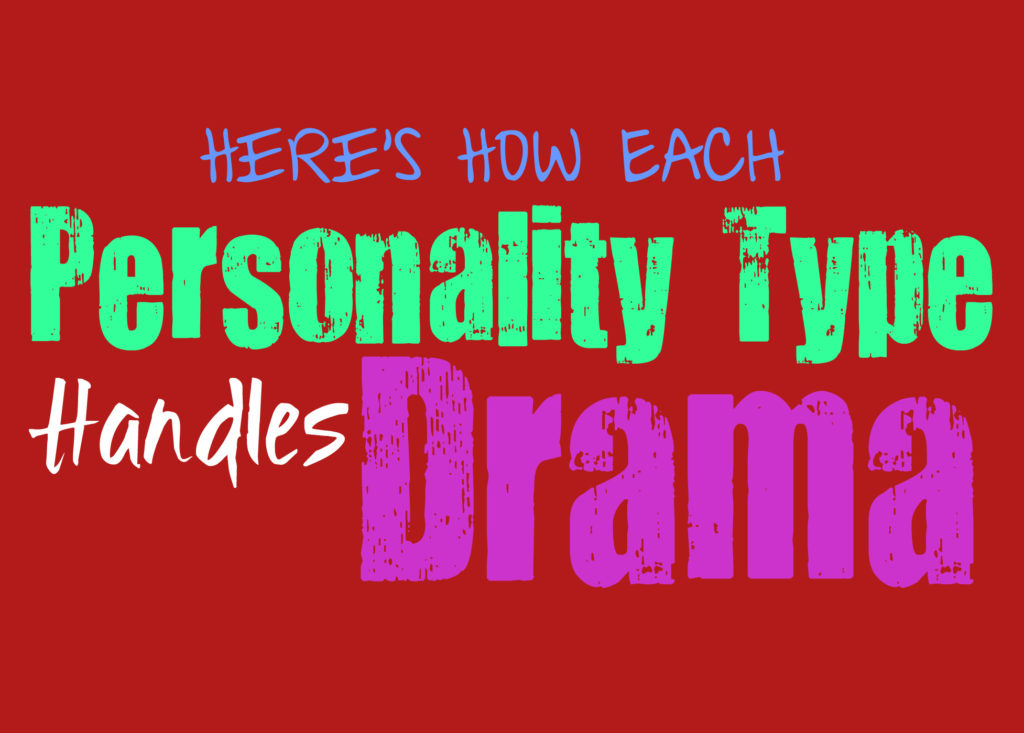 Some people have a natural pull towards drama, while others attempt to avoid it at all costs. Here is how each personality type responds to drama.

INFJs tend to truly dislike certain kinds of drama, but might find themselves involved in it involuntarily. People often come to their INFJ friends with all of their life and relationship drama, in hopes that they will help them. This interest in caring for others is what drags the INFJ into the drama of other people. They can have a secret flare for dramatics though, and sometimes can appear over the top when it comes to certain things. This is simply because INFJs are intense people, with powerful emotions. These emotions can cause them to appear dramatic about certain subjects, but it is truly just because they are passionate people.

ENFJs often handle drama very well, and find themselves constantly caught up in it. The ENFJs interest in caring for the emotional needs of others, often leaves them smack in the middle of drama. They are the person everyone relies on to help them when they need life or relationship advice. Being the go to support system, often causes the ENFJ to become swept away in the drama of other people. They can be a bit dramatic themselves, especially with the things they are passionate about. ENFJs simply do not hold themselves back, and enjoy being upfront and honest.

INFPs definitely dislike most drama, and try their hardest to avoid it when they can. They do not enjoy being caught in the middle of fights or relationship struggles, and prefer to keep the peace. INFPs might be a little dramatic when it comes to the things they are passionate about, and can appear emotional at times. They simply are honest about their feelings and dislike hiding their intentions from others. They have powerful emotions and morals, which can cause them to appear dramatic to people who do not understand them. Ultimately though, INFPs dislike drama if it is going to harm or upset someone.

ENFPs can actually have a flair for the dramatics, and might even enjoy being the center of attention. They will be intentionally dramatic just to make people laugh or entertain themselves or others. ENFPs will only enjoy drama if it is harmless and does not hurt or upset another person. They dislike drama that involves fights or people’s lives becoming disrupted. ENFPs simply like a little drama in their lives, but only for the sake of entertainment and excitement. ENFPs are passionate people, which can cause people to believe they are dramatic at times.

INTJs usually hate dramatics, and dislike being around people who are overly dramatic. Someone who chooses to be emotional about the most pointless things, will absolutely annoy the INTJ. They prefer to avoid other people’s pointless drama, and will keep to themselves as much as they can. They would much rather have people in their lives that avoid drama, and who prefer to participate in activities that enrich their minds and souls. INTJs don’t mind small theatrics, and understand that sometimes people need to dramatize in order to fully make their point known. In most cases though, INTJs prefer logic over drama and over the top behavior.

ENTJs don’t mind a little drama here and there, but they certainly dislike people who are overly emotional. They dislike people who openly display their emotions and are constantly seeking out attention from others. ENTJs prefer to live their lives away from this type of drama, and simply do not have the time or energy for it. They don’t mind if someone is being playfully dramatic, or if they are simply doing it in order to make other people laugh. ENTJs just don’t want to be a part of peoples emotional or relationship drama, and will do their best to avoid those people.

INTPs truly dislike drama, especially if they feel like it is affecting the lives of others. They truly hate feeling like their time is being wasted by the dramatics of others. INTPs might event become frustrated by people who are overly dramatic and emotionally expressive. They do dislike drama, but they might find themselves observing certain dramatic people in order to understand their behavior. INTPs are observers, and prefer to analyze the behavior of others rather than participate directly in it. This helps them understand how who they can and cannot trust, and helps the INTP decide who they want to let into their world.

ENTPs dislike overly dramatic people, and hate when individuals are senselessly emotional. They prefer to be around people who can control themselves and don’t just fight for center of attention. ENTPs can be a bit dramatic sometimes, but it is purely in jest. They won’t enjoy drama that seems to be affecting the lives of others, and truly dislike when people want to drag other people into their theatrics. ENTPs simply enjoy being a little over the top in a playful way, and don’t mind having a little fun. They might be dramatic by making up a song to make people laugh, or doing something crazy and shocking like cliff diving.

Most ISTJs definitely dislike drama, and will do their best to avoid it at all costs. They might find themselves caught up in the drama of others, especially since they have a deeply caring side to them. After a while though, the ISTJ will find themselves pulling away from people who are overly dramatic. If the drama of others negatively affects their lives, they will definitely not want to be around this type of behavior. They don’t mind someone who is a little dramatic for the sake of humor or silliness, since it isn’t actually harming anyone.

ESTJs definitely dislike drama, especially when it comes from overly emotional people. They will often become annoyed by these types of attention seeking individuals, and will find themselves exhausted by them. ESTJs don’t mind a little drama in their lives, they simply dislike over the top theatrics. They enjoy helping their loves ones, and might give into their drama sometimes even if they dislike it. ESTJs simply prefer to live their lives focused on their goals and dislike pointless drama.

ISFJs are peacekeepers and often do their best to avoid drama. They want to make their loved ones happy and because of this drama is often very upsetting for ISFJs. They will do whatever they can to calm things down and will attempt to fix whatever problems have come up. ISFJs definitely do not enjoy causing drama and instead will work hard to fix the drama in their environment. ISFJs definitely prefer to keep the peace, which makes drama their enemy.

ESFJs often find themselves caught up in the drama of others, since they are constantly focused on the emotions of other people. They can quickly find themselves being dragged into other people’s emotional drama, even if the ESFJ does not want to be. They have a hard time saying “no” to people, which makes it hard for them to avoid drama in most situations. ESFJs actually dislike people who attempt to create drama, especially if it is hurting someone they care about. They won’t be afraid to dive into the dramatic situation though, especially if they feel like it could help calm the situation down.

ISTPs definitely dislike drama, and will do their best to avoid it at all costs. If they are around someone who is constantly over dramatic and emotional, the ISTP will become very frustrated. They often prefer people who are secure and stable, and dislike emotionally messy individuals. ISTPs enjoy having excitement in their lives, but they do not want this in the form of drama. They would much rather seek out exciting new hobbies and fun things to participate in with their loved ones.

ESTPs do have dramatic moments, especially since they despise being bored. If the ESTP feel stagnant for too long, they might even create drama in their lives just to spice things up. They absolutely hate feeling like they have nothing interesting going on in their lives, and will be great at stirring up drama. ESTPs can sometimes make a mess of their own lives out of sheer boredom, but will be capable of piecing things back together afterwards.

ISFPs prefer to avoid too much social interaction, and often enjoy being with one close friend or loved one. They do have moments where they can be a bit dramatic though, especially if they are seeking the attention of a certain person. ISFPs do dislike drama if it hurts someone else though, and will want to avoid that at any cost. They dislike feeling as if their actions have hurt someone else, and will definitely not let their drama harm someone. ISFPs do not mind a little drama, since they dislike feeling stagnant for too long.

ESFPs definitely enjoy a little drama in their lives, and dislike being stagnant for too long. They don’t always mean for it to happen, but drama seems to follow ESFPs. They enjoy having excitement in their lives, and might find themselves drawn to dramatic situations. No one will ever call an ESFP boring, but they might call them a bit dramatic. They enjoy making other people laugh, and will often go over the top in order to do so. ESFPs can also be a little dramatic when they want attention from someone they love, and will go to great lengths to get what they want.