Here’s How You Feel About Entitlement, Based on Your Personality Type 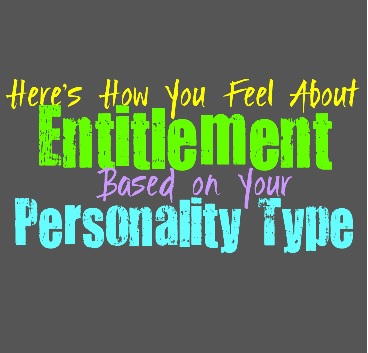 Here’s How You Feel About Entitlement, Based on Your Personality Type

While some people have a tendency to feel entitled to certain things in life, others feel like nothing is promised to them. Here is how you often feel about and respond to entitlement, based on your personality type.

INFJs rarely feel a sense of entitlement in life, and often believe in doing what they can to accomplish their goals. INFJs usually become frustrated by people who automatically feel entitled to things in life, and feel like these people are being a bit selfish. While they are entitled people, INFJs do believe that everyone is entitled to the basic human decencies, like respect and free-will. For them it is more about giving people space to be themselves without having to shadow their every move in life. They do believe that these basic things are what we should be allotted in life, but other than that they don’t have a sense of entitlement.

ENFJs don’t often appear entitled, but at times they can feel a bit more inclined towards this. They simply feel like they work so hard and should be given some sort of respect and appreciation for everything they do. ENFJs don’t believe people are automatically entitled, but they do believe that after working hard and pushing towards something it is only fair to be given this respect. For the ENFJ it is more about working towards things, and they believe in a sense of fairness.

INFPs have strong inner morals and believe that everyone is entitled to certain things in life. While they don’t like people who constantly act like they are entitled to more than everyone else, there are some aspects of the INFP that cause them to have some sense of entitlement. This is simply because of their inner system of morals, which people that every human should be allowed certain rights in life. Mostly they believe that people should be respected and given a sense of freedom to be themselves without having others infringe on this.

ENFPs don’t often focus on this idea of entitlement, instead they would rather focus on living their lives. They can become so easily distracted from moment to moment, mostly because there is so much going on inside of them. ENFPs don’t usually feel entitled to things, but there are parts of them that can start to drift this direction. This is simply because ENFPs have such complex and deep inner emotions, as well as a strong set of morals. They believe that people should be treated fairly, but sometimes this can come out in a way that seems like entitlement to others.

For the INTJ a sense of entitlement is often one of the most annoying things. They don’t believe that people are simply entitled to things from birth, they believe everything should be earned. INTJs work hard to learn and continue to grow, and they don’t believe that anything should simply be handed to them. They want to earn what they get in life, and this is why they aggressively go after their goals. INTJs are not afraid of challenges, and so to them it more valuable to earn something than to simply have it handed to you.

ENTJs often become annoyed by people who feel entitled, especially when they haven’t worked for anything. ENTJs are focused people who do whatever it takes to achieve their goals in life, and they do this by learning and motivating themselves. ENTJs don’t expect anything to simply be handed to them in life, they expect to work and earn what they achieve. They constantly want to learn and keep themselves mentally stimulated, so that they can truly achieve what they want from life in an efficient manner.

INTPs don’t usually feel entitled to anything in life, and can become a bit annoyed by people who feel this way. They are independent people who prefer to focus on expanding their mind, instead of constantly trying to grasp at things they feel they are owed. INTPs can struggle with motivation, but that doesn’t mean they have this feeling that things should be handed to them. They realize that sometimes they struggle to motivate themselves towards their goals, but they are often perfectly fine with that.

ENTPs don’t usually feel entitled to anything, accept for a sense of freedom. ENTPs want to be able to make their own choices, and they feel like this is a fair way to live. They also believe that others are entitled to this type of freedom and independence in life. ENTPs don’t like when something holds them back and want to have free range to make the choices that feel right for them. ENTPs simply feel entitled to freedom in their lives, other than that they are perfectly happy earning everything they get.

ISTJs rarely have a sense of entitlement, and often become annoyed by people that do. ISTJs are hardworking people who believe they need to put forth effort for anything they get in life. They do not expect anything to be handed to them, and instead they believe it should be worked for. ISTJs don’t have this idea in their minds that things are free, they realize that anything they want including respect, should be taken and not given.

ESTJs don’t often have a sense of entitlement in life, and usually believe that things should be earned. Instead of expecting things to be handed to them, the ESTJ will push themselves to achieve their goals. When they encounter someone who seems entitled, it can leave the ESTJ feeling annoyed and truly frustrated by that person’s presence. They would rather be around people with a strong work ethic, who believe in earning what they have in life.

ISFJs rarely feel entitled to anything in life, instead they work to achieve their goals. While most ISFJs are not entitled people, this often depends on how they were raised. ISFJs are strongly connected to their past, and will be molded by the environment they grow up in. If many things are handed to them throughout their lives, they might feel like this is the way life should be. The ISFJ who had to earn things from a young age, will hold onto those morals later on.

ESFJs rarely have a sense of entitlement, instead they usually become annoyed by people who act this way. ESFJs realize that things in life need to be earned, and don’t believe that it should just be handed out. They often become frustrated by people who demand that things are owed to them, especially when those people are whining about it. ESFJs do work hard to give to others and believe that kindness is important in life. While they are empathetic and caring people, they simply don’t believe that entitlement is a good quality.

ISTPs rarely feel entitled to anything in life, and have little expectations about what should be granted to them. ISTPs simply want to live life with some independence, and will focus on taking care of what matters to them. They often mind their own business and prefer to avoid people who constantly act entitled and snobbish. ISTPs can struggle with strongly moral people because of this, and dislike their attitude that things in life are owed to them and others.

ESTPs don’t usually feel entitled, they simply focus on attacking their goals. They understand that things need to be earned in life and don’t constantly expect things to be handed to them. When people whine or complain that they aren’t given enough, the ESTP often becomes annoyed by this. While they can sometimes believe that they aren’t being treated fairly, they will simply work to find a way around this instead of feeling like they are entitled to more.

ISFPs can sometimes feel a bit entitled, and this comes from their inner morals. They sometimes believe that people are owed certain things in life, and should be given a certain amount of fairness. They become frustrated when they witness injustices, which causes the ISFP to feel a bit like they are entitled to certain things in life. They do understand that things need to be earned, but there are certain basic human rights that they feel should be granted.

While ESFPs don’t really feel entitled to anything, they do have a way of demanding things. They sometimes feel like people should be allotted certain things in life, such as compassion and respect. Some ESFPs can feel like they should be handed things in life, especially if they were a bit spoiled growing up. They have expectations from their loved ones and can become frustrated if those things are not met. They simply want their lives to be fun, and enjoy living in the present without having to focus on the future that much.