Here’s How Each Personality Type Feels About Justice 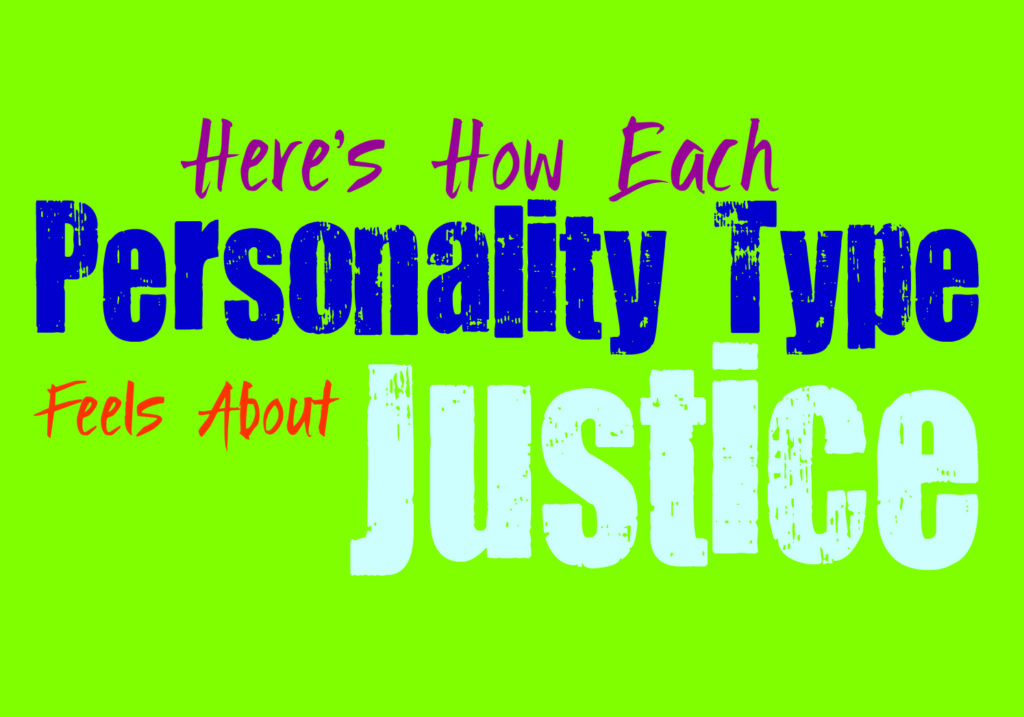 Here’s How Each Personality Type Feels About Justice

There are some types that believe in justice, and seek to change the world for the better. There are others in this world who have a more unique viewpoint on what is right and wrong. Here is how each personality type feels about justice.

Justice is extremely important to INFJs, and is something they believe in very deeply. They sincerely desire to seek out justice whenever they can, and believe that all wrongs should be righted. INFJs are often bothered when they see injustices committed in the world around them, and will not hesitate to stand up for what they believe in. Whether it be protesting on a rather large scale issue, or simply doing their part to right a smaller wrong done- INFJs believe in following their morals and doing what is right. They become extremely upset when they see innocent people hurting, and will become fierce in their defense of truth is morality.

ENFJs certainly believe in justice, and want to do their best to stand up for what is right. ENFJs believe that when someone has been wronged, there should be some sort of payback for this. They will often step in and try to defend people, especially when they know it is the right thing to do. ENFJs often struggle with the fact that injustices are committed, and want to do what they can to make a change. ENFJs are extremely focused on caring for the needs of their loved ones, and will often try to make a difference even if it is in this way.

INFPs have very strong inner morals, which causes them to believe greatly in justice. They are constantly focused on doing what they believe is right, and because of this they often stand up for others. INFPs believe that justice is extremely important, and despise when they see unfairness in the world around them. They can often become very upset by the pain in the world, and want desperately to do something about it. INFPs can become frustrated if they feel like they aren’t making a big enough difference, and truly believe that they are meant to serve a greater purpose.

Justice is definitely important to ENFPs, since they believe in doing what is right. If they see an opportunity to right a wrong, they will certainly step in and take it. They are courageous people when they are doing something they believe is good and right. ENFPs are often seen as bubbly and positive people, but they do have rather deep and complex souls. At the heart of the ENFP there is a desire to do what is right, and a goal to make a real difference in the world around them. They will often struggle in life if they feel like they aren’t truly doing anything to serve a greater purpose.

INTJs are logical people who believe in following the path of knowledge. Although INTJs are not driven by emotions, they are still people with their own moral code. They believe in justice, although they believe in carrying it out in a logical manner. They believe in finding smart and well thought out ways to solve problems, and right the wrongs that have been done. INTJs might not be as upset as some other types when something bad happens, but they can logically observe the situation and understand that something should be done to change it.

ENTJs are extremely driven and motivated people, which causes them to focus on getting things done. They believe in efficiency and will become frustrated when people do not work their hardest. ENTJs are more focused on logic than they are emotions, which causes them to miss certain injustices. They do not waste their time on things they cannot change, and can be a bit cynical sometimes. If the ENTJ does believe they can make a difference, they will certainly do what they can to do what is right. They are independent people, who are always oriented towards a goal that will help them become a better version of themselves.

INTPs are logical people, which can cause them to have a unique perspective on justice. INTPs certainly have their own morals, and want to be seen as good people. The fact that they are so focused on logic and reason, can cause the INTP to believe in a different type of justice. They will be capable of seeing different sides to each action, and sometimes can find themselves inside the minds of people that might be morally impaired. INTPs can sometimes be harsh with their views, and will combine this with a somewhat cynical outlook. Instead of using emotions to evaluate a situation, the INTP will use logic and attempt to analyze every aspect of it.

ENTPs are driven by logic and knowledge, and seek to fully understand the world around them. They can sometimes have a unique idea of what justice truly is, and might not follow society’s standards. Instead of using emotions and evaluate a situation, ENTPs will use their own logical minds. They will often play devil’s advocate, and place themselves in the shoes of every individual involved. This can result in the ENTP feeling less inclined to carry out some sort of personal justice, since they can understand where everyone is coming from. They often believe that justice is a complicated subject, and do not see things as black and white.

ISTJs are certainly moral people, and believe in upholding certain standards in their actions. They believe in justice, but they often do not see a purpose in pushing hard to carry it out themselves. ISTJs realize that they can only do their part, and do not have false ideas that they are some kind of hero. ISTJs will certainly stand up for what they believe is right, and desire to see justice carried out. They often believe in rules and laws, and prefer to see them followed as a means to writing these wrongs. Instead of taking it upon themselves, ISTJs often believe that the laws are there for a reason.

ESTJs definitely believe in justice, and will often do their part to make a difference. ESTJs often do well in certain roles such as law enforcement or military, and will see this as a useful way to help others. They are often protectors, and want to help people in any way they can. They may not have irrational beliefs of changing the world by altering the perception of others, but they are willing to stand up and fight for what they believe in. ESTJs know when it is time to pull back though, and will not push past certain boundaries. They simply believe that justice is important, and do what they can to help others.

ISFJs certainly dislike seeing other people in pain, and believe that justice is important. They do not always believe that they personally can make a difference, but rather want to trust people with the power to make change happen. ISFJs are often focused on helping their loved ones, and believe in making a difference on a smaller scale. They can easily feel guilty over the pain in the world, and often wish they could help people. ISFJs are caring people, and realize that helping even in the smallest way is important.

ESFJs certainly become upset when they see certain injustices being committed, and truly hate seeing others in pain. They do believe in doing what is right, but they are often more focused on their loved ones. ESFJs can feel the pain of others, and often have to find a way to shut themselves off from this or else they will be overwhelmed. They try to focus on helping others, and will do their best to make a difference even if it is just on a smaller scale. ESFJs often feel like if they can positively affect the lives of just a few people, they are actually making some kind of difference.

ISTPs do believe that justice is important, but they might have their own idea of what is right and wrong. They often prefer to have peace in their lives, and do not want to have their freedom invaded. The biggest injustice to ISTPs is seeing people being forced to do something without their consent. ISTPs will certainly step in when they see people are in need of assistance, but they do prefer to let people stand up for themselves. They might not believe in larger scale justice, and often have cynical ideas about society and their need for justice.

ESTPs live very much in the present moment, which can sometimes cause them to miss out on the injustices around them. They are focused on living in the physical world, and prefer to live their lives with independence. ESTPs work hard to live up to their own standards, and believe in working hard. They do not often become upset by injustices, simply because they realize that the world can be a dark place. ESTPs do not like seeing people in pain, but at the same time they do not want to burden themselves with these thoughts.

ISFPs definitely believe in justice, and have rather strong inner morals. They want to do what is right, but often have a hard time finding a purpose in life. ISFPs are caring people, and believe that karma is a very real thing. They have a natural belief that the wrongs in the world will find a way to right themselves, and are happiest when they see this carried out. They will certainly do their part when they can, but rarely make this their life mission. ISFPs simply realize that they cannot do everything themselves, and although they will make a stand when they can, they will not burden themselves with saving the world.

ESFPs certainly believe in justice, and dislike seeing other people in pain. Although ESFPs do believe in justice, they have a hard time living their lives with this focus. They often prefer to draw their attentions to more positive ideas, and will search for distractions to free them from the pain of the world. ESFPs live their lives in the present, and realize that this is their best means of being happy and bringing joy to others as well. Justice is something they believe in, but they often have a hard time focusing on this, since it also means focusing on the sadness in the world.