How Do Rumors Affect You, Based on Your Personality Type 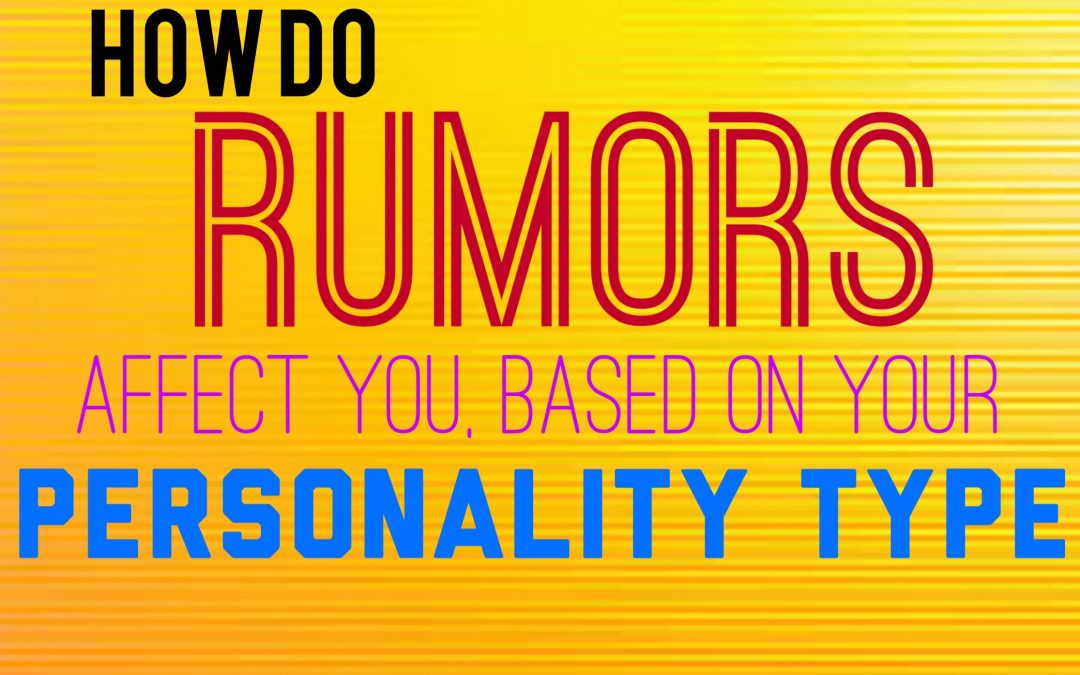 How Do Rumors Affect You, Based on Your Personality Type

Some people struggle when it comes to hearing rumors spread about them, while others seem to be great at letting it slide. It’s never a fun experience to know someone is spreading rumors, but some can handle and cope with this better than others. Here is how rumors affects you, based on your personality type.

INFJs definitely become bothered by the idea of rumors, especially since it can affect how loved ones see them. Simply the idea that someone is spreading lies about them, can cause the INFJ stress. Some might take this as amusing though, especially if their loved ones don’t believe the rumors. For the INFJ it is important to have loved ones who will believe in them no matter what others say or spread about them.

ENFJs can actually become very upset when they know that rumors are being spread about them. They care about how others see them and so it becomes troubling when they realize that rumors are being spread. They will likely want to find a way to rectify this situation and try and prevent the rumors from causing problems in their lives. ENFJs are people pleasers and so having trouble because of rumors could affect their lives deeply.

INFPs try not to let rumors bother them, but at the same time it definitely can be troubling. They often become upset by the idea that people actually want to spread rumors and lies about them. INFPs don’t appreciate this type of malicious behavior and so it can be rather painful for them. They might try and find ways to make the situation better and try and stop the rumors. The biggest concern for the INFP is having their loved ones believe in the rumors.

ENFPs really do become bothered by rumors but for them it depends on what the rumor is about. If it is something that could damage their reputation or cause their loved ones to doubt them, the ENFP will become upset. If the rumors being spread don’t upset them or damage their reputation than they don’t really mind the attention. ENFPs can become comfortable with rumors if they give them a sense of popularity, especially when they are younger.

INTJs usually don’t like getting involved in pointless drama, but they understand that rumors can become damaging to their reputation. INTJs work hard to make sure they can accomplish their goals and so they don’t want rumors to have any chance at preventing them from achieving these things. They will do their best to prevent any serious rumors from spreading and will yet to address them in a way that solves these problems.

ENTJs don’t become personally hurt by rumors, but they do want to avoid allowing vicious ones to spread. If these rumors could somehow damage their reputation or be taken seriously, then they want to find a way to prevent them from spreading. ENTJs work hard to accomplish their goals and they don’t want anything to stand in their way. They will simply take this as a problem they need to solve and will do their best to overcome this situation.

INTPs try not to let themselves get bothers by rumors but they do understand that it can damage their reputation. They are analytical people who are very good at figuring out the most likely potential outcomes, and so they can often predict if certain rumors could be damaging. They will do their best to try and expose the person who is harming their reputation, and fix the problem at hand from behind the scenes.

ENTPs are often used to having rumors spread about them and so they try their best to ignore them. They don’t like letting themselves become upset or caught up in these foolish rumors, and so they try to just move one. They understand that some rumors can be damaging and so they simply do their best to prove that they are untrue. ENTPs live for facts and truth, and so exposing people is something they are good at.

ISTJs try not to concern themselves with drama and rumors, but they also don’t want these things to affect their lives. If they notice that the rumors are going to affect their lives and their careers, then they will do their best to prevent this from happening. They will use facts and truth to make it know to everyone what is truly happening, in hopes of shutting these rumors down.

ESTJs don’t want drama or rumors to mess with their lives or careers and so this can be upsetting for them. When someone spreads rumors which could be damaging the ESTJ will do their best to make the truth known. They want to address these rumors and work on solving the problem. If they are just silly rumors then it won’t upset the ESTJ, and they’ll simply laugh them off.

ISFJs care about their reputation and want to avoid letting any rumors spread. Rumors can harm their relationships and even their careers and for the ISFJ this is deeply troubling. They do care about how others perceive them and want to be valuable members of their society. For the ISFJ rumors can be damaging and so they want to find a way to mend these situations.

ESFJs don’t want to let rumors cause them problems, especially with their loved ones. They don’t want any negativity to ruin their reputation or cause their loved ones to doubt them. They will likely become upset when this happens and will try their best to make things right and share the truth. ESFJs don’t like letting these rumors get to the people they love and so they will try to make it right.

ISTPs are often good at letting go of things like drama and rumors. They don’t want to let these things get to them and so they try not to really focus on it. If someone tries to spread damaging rumors the ISTP will do their best to make the truth known. They don’t like letting themselves become emotionally bothered by these things and want to learn to let go.

ESTPs don’t like letting rumors get to them, but they can be bothered by them sometimes. They don’t want people to know that they are upset and so sometimes they put on a front. ESTPs actually do care how others see them, especially their loved ones. They might pass these rumors off as amusing but it can be rather hurtful for them.

ISFPs try not to let things bother them, especially when it comes to rumors. They want to be able to move on from these things and focus on what matters. While they do their best to avoid getting hurt by rumors, they are sensitive souls and so these things can be troubling. The most important thing for the ISFP is knowing that their loved ones don’t believe the rumors and will still stand by them.

ESFPs are often viewed as fun and lighthearted people and so they try their best not to get caught up in rumors being spread about them. While they try not to let these things bother them, ESFPs actually do care about what people think. I’d rumors are being it can be damaging for the ESFP and leave them feeling afraid of how people will see them.