Here’s What You’re Probably Neglecting Most, Based on Your Personality Type 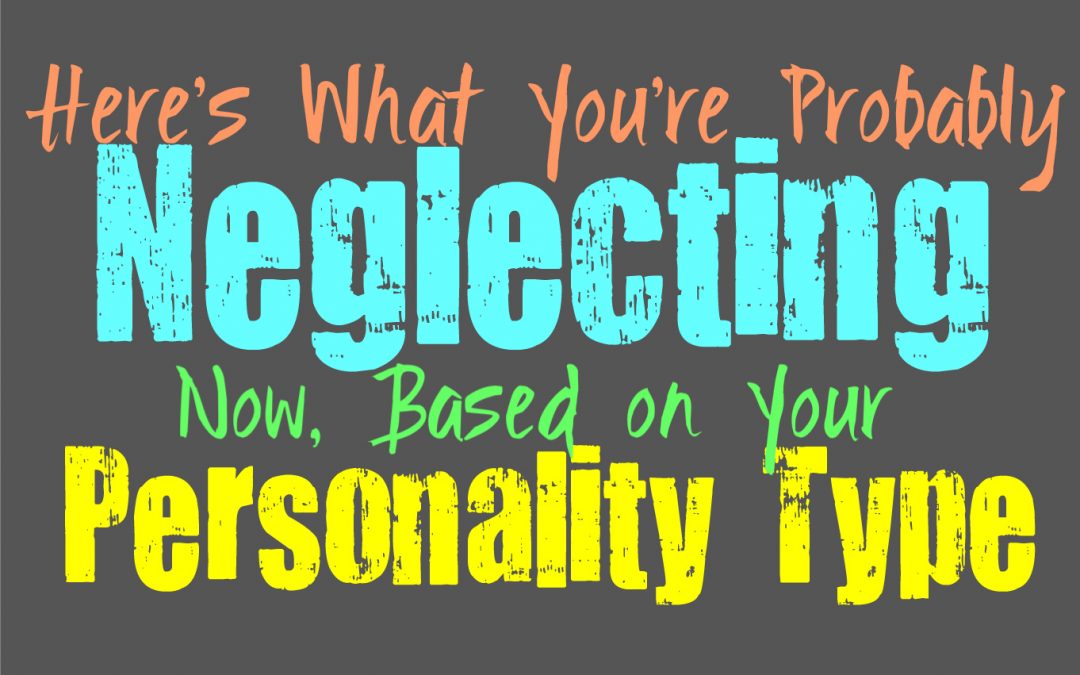 Here’s What You’re Probably Neglecting Most, Based on Your Personality Type

Everyone has certainly things in their life that end up becoming neglected over time. Some are little things, and some are much larger issues. Here is something you are probably neglecting, based on your personality type.

INFJs have a tendency to focus on taking care of others, but at the same time they don’t always know how to step outside of their own comfort zone. They most likely will neglect something that they know they should be doing, like applying for a different job or saving money for a better vehicle. They will often neglect these larger changes, and forgo them for something more important to their loved ones. INFJs don’t like taking chances that might negatively affect others, even if they know in their hearts it is what they need to do. INFJs simply have a hard time doing anything that seems overly selfish, but oftentimes they neglect themselves because of this.

ENFJs are more than likely neglecting themselves and their own personal needs. They spend so much of their energy working hard and taking care of everyone else, that the things they neglect is the thing they personally want or need. ENFJs rarely neglect their chores or even the larger things that need to be taken care of. They can juggle so many tasks at once that they never seem to stop to breathe. The ENFJ does not neglect their loved ones or the important household tasks, what they end up neglecting is themselves. They spend so much energy on others that they start to lose sight of their own wants, to the point where they might not even know what they are.

Unfortunately the INFP is likely neglecting a lot of things, but mostly it is their chores. They spend so much time inside of their own rich and active inner worlds that they don’t really want to take time out to waste on chores. INFPs often hate having to deal with the menial and boring tasks of daily life, so they often neglect them for a while. The INFP is likely neglecting something like doing the dishes, or even getting their license renewed. Those sorts of tasks are likely their least favorite things to deal with, so the INFP often neglects them at least for a little while.

ENFPs often neglect the chores and boring tasks that they simply do not want to tend to. Whether this be something like getting their car fixed, or applying for a job. While they aren’t at all lazy people (often quite the opposite) they simply don’t like having to feel obligated to do something. The tasks that the ENFP knows they must take care of, are the ones they are likely neglecting the most. They want to feel free to explore new things and take on something when they are good and ready to do so.

INTJs are focused and responsible people, who often like to get things done ahead of time. They aren’t slackers, even though their inner worlds can be rather distracting. They work hard to get things done, and also push themselves to constantly be improving. The thing that INTJs neglect more than anything else, is facing their own emotions or dealing with the emotions of others. Neglecting emotions is something the INTJ does consistently, even though they don’t always intend to. It just seems to make more sense for them to focus on facts rather than feelings, and this is why their emotions become neglected for a long time.

ENTJs are driven people who try not to neglect anything of importance to them. They focus on getting things done in the most efficient way possible. ENTJs don’t like to leave any loose ends, so they rarely neglect the important daily tasks that need to be taken care of. Where ENTJs can tend to neglect things, is when it comes to the more emotional side of life. They might neglect their own emotions for a long time, allowing things to bottle up and cause them trouble later on. ENTJs can also neglect the emotions of their loved ones, choosing to focus more on their immediate practical needs instead.

INTPs have a tendency to neglect certain chores or tasks that they simply have no passion for. While they can handle taking care of themselves, the INTP can occasionally neglect their own physical health. They are so inside of their own inner worlds that they can sometimes forget to connect with their physical body, and may forget to eat or take care of certain smaller things. This can lead to the INTP suddenly not feeling well and struggling to understand why at first. INTPs simply aren’t as connected to the physical world as they are their rich inner minds.

ENTPs are mostly focused on exploration and learning, which can sometimes cause them to neglect anything they find boring. They truly hate feeling stagnant for too long, and will become frustrated having to repeat the same tasks over and over again. ENTPs are likely neglecting their household chores and things like doing the dishes, for something much more entertaining and fulfilling. They certainly won’t neglect these things forever, but they can procrastinate with the best of them.

ISTJs are responsible people who try to focus on getting things done. They can handle the day-to-day tasks that most people allow to pile up. ISTJs often enjoy taking care of these sort of chores, since they are practical things that can be solved rather simply. ISTJs try not to neglect anything that they believe is important, and will always be dependable for their loved ones. The thing ISTJs are likely neglecting is the more emotional things and possible problems within their relationships. The ISTJ will try to solve these things in a more practical way, and when they realize it cannot be done they will become overwhelmed and will likely neglect the emotional aspects of the problem without meaning to.

ESTJs try not to neglect their responsibilities, and will try their hardest to get everything done. They are efficient people who can often handle the day-to-day chores that need to be done. There are times when the ESTJ can neglect certain things if they feel overwhelmed by too many tasks at once. They become frustrated if they need to take care of things that seem like it requires far too much focus on personal energy. ESTJs can sometimes neglect these tasks, especially if they feel like they might not be able to handle it on their own.

ISFJs are very focused on taking care of the practical things around them, and work hard to provide for their loved ones. They try to be supportive and helpful towards others, no matter how challenging it might be. ISFJs will neglect their own needs more than anything else, this can be especially harmful since they are introverts. ISFJs will often neglect their need for alone time, especially if their loved ones seem to need them. This can be challenging for the ISFJ to overcome, since they don’t want to let down the people they love.

ESFJs are very focused on tending to the needs of others, and are more interested in making their loved ones happy. They are often responsible people who can juggle many tasks at once in order to provide for those around them. The thing the ESFJ is likely neglecting the most, is themselves and their own desires. ESFJs can forgo tending to their own needs for a long time, in order to ensure that their loved ones are happy. This is something that can become rather overwhelming for them, especially if they neglect themselves for too long.

ISTPs can often neglect their more mundane responsibilities, since they aren’t often interested in accomplishing them. ISTPs live in the present moment and enjoy diving into things that excite them. Having to do the dishes or take care of those boring tasks are things that the ISTP can often neglect. They will take care of certain daily tasks, but only the ones that they enjoy or that require certain problem solving skills.

ESTPs can often neglect a lot of their more boring daily tasks, especially things that involve cleaning. They might go weeks without cleaning certain things simply because they don’t feel inclined to do it. ESTPs can often take on a lot of different tasks and responsibilities, but the smaller things can pile up after a while. They live in the present moment which can cause them to choose the more enjoyable task instead of the ones they feel can be procrastinated for a while.

ISFPs are likely neglecting the more boring daily tasks that they need to get done. They often procrastinate things that they find mundane, like household chores or job hunting. ISFPs live so much in the present moment that they can sometimes neglect the future for temporary satisfaction. They simply want to follow their hearts and enjoy the moment without having to become bogged down by chores or responsibilities.

ESFPs don’t often think about the future, which can cause them to neglect certain tasks. The ESFP might neglect paying bills on time, or scheduling an appointment that needs to be done. They dislike these sort of boring tasks and would rather focus on things that excite them. They can certainly plan things that they are excited about, but have a hard time planning for things they find boring and pointless. ESFPs aren’t always good at taking care of the day-to-day tasks, and might even neglect them.