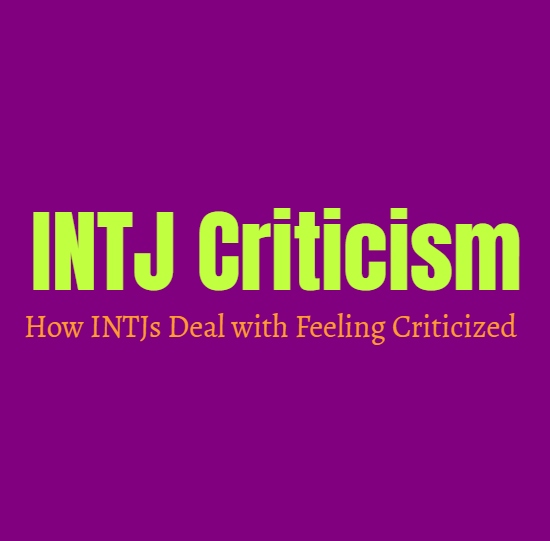 INTJs are often more equipped to handle certain criticism than the average person, but that doesn’t make them completely immune to it. For the INTJ it often depends on the intentions and if the criticism is actually constructive or if it is pointless. They don’t really appreciate their time being wasted on something which isn’t useful or logical, and so INTJs take criticism differently depending on the specific situation. For them it isn’t about their feelings being hurt, so much as it is about the level of respect coming from the person delivering the criticism. They try their best to approach things logically and rationally, and don’t want to allow their inner feelings to prevent them from seeing things more accurately. They value being able to grow and learn, which is why INTJs can often handle certain criticism fairly well.

INTJs value information and also believe in growing and becoming a better version of themselves. They favor logic and facts, rather than approaching things based on their inner emotions or feelings. INTJs also aren’t that sensitive to the feelings of others, and instead want to be helpful towards people in more practical ways. They do care about helping and making a difference, they just value doing this in efficient and rational ways. The fact that INTJs don’t often allow emotions to control their behaviors or views, is actually what helps them handle criticism much better than most people.

Instead of getting offended the INTJ will try to look at the criticism objectively, and even analyze the information they are being provided with. They enjoy being able to listen to someone who has truly logical and reasonable points, and they will take this in as best they can. INTJs don’t just believe what they are told, but they will certainly hear someone out when they can express things intelligently without a lot of emotions being expressed. In this case they want to take in the information and consider whether or not it seems valid, especially if it is intended as constructive criticism. INTJs do take a lot of convincing and proof before they will change their minds about things, but that doesn’t mean they don’t want to hear what people have to express. This can help them adapt and change their own views a bit, and even add some things which they previously weren’t aware of. Sometimes criticism can help them improve, especially in areas they feel they need a bit of work. They want to be able to improve and sometimes taking in these critiques can actually be helpful in their eyes, especially for the more mature INTJ.

When the INTJ is not a fan of criticism it is often because of the intentions behind it, and if it just isn’t helpful at all. Someone who is only criticizing to be disrespectful or harmful will definitely anger the INTJ. They are likely to shut this person down rather quickly, wanting to avoid wasting their own time on someone who isn’t being productive. INTJs are good at setting boundaries and expressing when they are not going to deal with someone’s negative behavior. They can often tell the difference between someone attempting to be helpful, or someone who is simply trying to start drama with them. They won’t necessarily be hurt or offended by this, but they really don’t want to spend anymore time on that person. The INTJ will likely cut people out of their lives who behave this way frequently, and would rather have companions who help them improve and are capable of growth themselves. When the INTJ has to deal with someone who attempts to bring them down or use the guide of constructive criticism as a means of insulting others- this really isn’t someone they want to spend their time around. While INTJs can handle certain criticism, they don’t feel it is smart to be around people who feel the need to constantly criticize and waste their time and energy.

Most INTJs are great at dealing with criticism because they can separate the constructive comments from people just attempting to be harmful. This is something which makes it easier for them to process the criticism and recognize when they can improve. INTJs can be a bit stubborn at times though, especially the less mature INTJ. They might struggle to really process certain criticism if they have a hard time letting down their guard, as their ego can sometimes stand in the way. While they might not appear hurt, they can still find themselves pushing away these comments and not really considering if they are valid. This is something which matured INTJs are not likely to do, since they enjoy being able to grow and improve and be open to information which they may have been ignorant to. They try their best to consider what they could be lacking, especially if they have requested criticism over something. INTJs just might be less receptive if the comments are given during times when they didn’t ask for it and don’t really want to hear it.