Which Qualities Do You Aspire to Most, Based on Your Personality Type 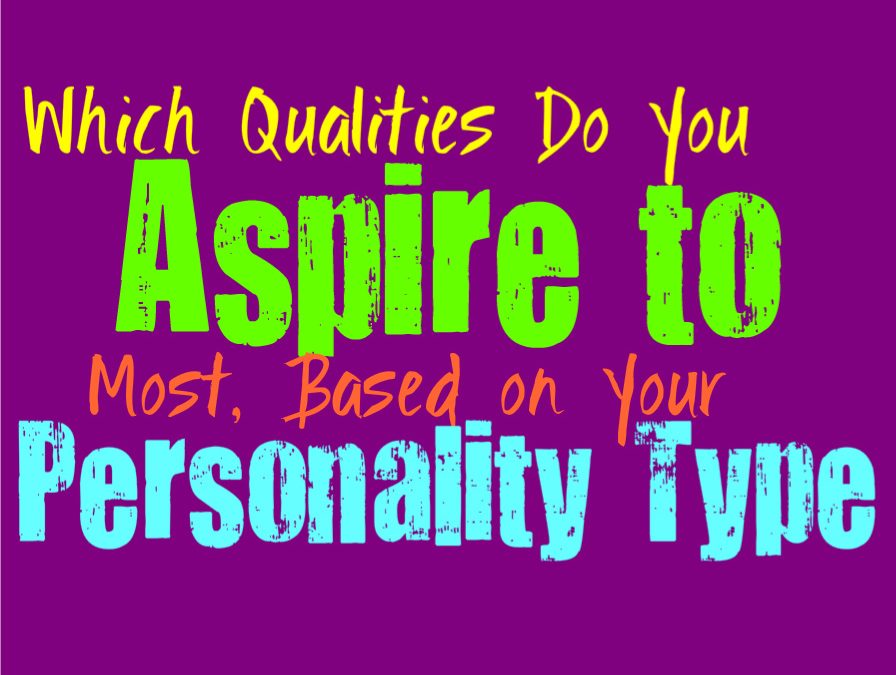 Which Qualities Do You Aspire to Most, Based on Your Personality Type

We all have certain personal qualities which we aspire to and want to really work towards. Certain internal goals which mean a lot to us, and will help us feel proud of who we are as people. This is something that can be hard to work towards, but we all possess these inner aspirations. Here are the qualities you aspire to the most, based on your personality type.

INFJs often have many qualities they aspire to, some of which seem a bit contradictory. INFJs want to be a lot of different things in life, most of all they want to be a person of true substance. They often aspire to both be strong and to be lovable, being someone who can handle a lot but who people around them value and deeply care for. INFJs do want to be loved, but they want to be appreciated for who they are and what they are capable of. They want people to see them and the goodness inside of them as well as the strength and uniqueness.

INFPs often have many internal aspirations, since they really want to become someone of substance and value. INFPs hold themselves to high standards, even though most people might not see this in an obvious way. They aspire to be someone who is honorable, someone who does the right thing no matter what stands their way. INFPs want to be strong people who don’t turn their back on the truth, or on their loved ones. They also aspire to be someone who achieves something truly great, something which makes a difference in the world.

ENFPs often aspire to many qualities and things in their lives, and can actually be harder on themselves than people realize. ENFPs often internally aspire to be someone who is both interesting and good. They want to be honorable people, who will always do the right thing even if it is difficult to do so. ENFPs aspire to a certain level of strength, and don’t want any challenges to hold them back. At the same time they aspire to be someone that others love and admire, hoping to really stand out in this way.

INTJs often aspire to many things and many qualities, wanting to really become someone they can be proud of. INTJs are almost always seeking some kind of growth, and dislike feeling trapped in the same place. For INTJs there are many qualities which they aspire to, the greatest is to be someone who is strong and knowledgeable about everything. INTJs want to be someone who is constantly growing and learning, so that they can actually become a trusted resource for information.

INTPs often aspire to many things, even if this isn’t something they share with others. Most INTPs are seen as logical people who aspire towards knowledge and understanding. This is only the tip of the iceberg for the INTP, since they do find themselves aspiring to many different things. They also seek to become more understanding towards people, and want to be someone others can appreciate for who they are and what they do for others.

ENTPs aspire to so many different personal qualities, and really want to seek out growth in their lives. They often want to be highly interesting and creative people, and enjoy being able to aspire towards strengthen these qualities in themselves. ENTPs also want to be highly capable of making a difference in the world around them, as well as with their loved ones. ENTPs don’t like stagnancy and so they value being someone who can create change and really improve their surroundings.

ISTJs aspire to be people who are strong, trustworthy and make a real difference in the world. While they might not seem like their goals are to make a difference, this is simply because they are happy to make a difference in a more local capacity. As long as they are improving their environment, ISTJs are happy with this result. ISTJs also aspire to be someone that others can trust and rely on, no matter how difficult the path before them might be.

ESTJs are very goal-oriented people who dislike feeling as if they aren’t pushing forward or growing as people. They definitely aspire to be strong and highly capable individuals, who are both intelligent and efficient. They don’t like feeling as if they are failing or falling behind, and so their strength is truly valuable to them. ESTJs also aspire to be someone others can rely on, and want to be the person their loved ones trust.

ISFJs aspire to be kind and giving people, who are loved and appreciated by those around them. They want to be seen for what they do, without having to force others to notice this. ISFJs work hard to take care of people, and they really just want to feel like they are making a difference in the lives of those closest to them. ISFJs often aspire to be accomplished and kind people, who don’t allow negativity to hold them back.

ESFJs often aspire to be someone others rely on, someone who actually makes a difference in the lives of those closest to them. They also aspire to be someone that others admire in some ways, since they want to be seen for everything they do and are capable of. Strength is important to the ESFJ, since they don’t want to feel like they are weak or incapable of doing something. They often sent their minds to something and will do anything it takes to accomplish these goals, and they want this to be something they are recognized for.

ESTPs often aspire to be someone who is capable and who is valued by those around them. They want to be impressive people, who have accomplished some level of greatness in their lives. While these desires aren’t always obvious to others. ESTPs really do want to be able to be someone others can be sincerely proud of. They aspire to be both impressive and interesting people, and want to be recognized for this.

ISFPs often aspire to be honest people who are strong enough to go after their dreams. They don’t want to feel like fear has held them back, and so being fearless is actually a quality they deeply desire. ISFPs believe in always standing up for what is right, even if it is frightening or challenging to do so. For the ISFP being capable of upholding their sense of dignity and honor, is truly important.

ESFPs aspire to be kind and loving people, who also keep those around them constantly smiling. They aspire to be interesting and entertaining, since they really despise the idea of being seen as boring people. ESFPs are fun-loving individuals, but they also aspire to be good and to stand up for what they believe in. This is something most people don’t see in the ESFP, but they truly want to be good people who make the right choices in life.