How Likely You Are to Eavesdrop, Based on Your Personality Type 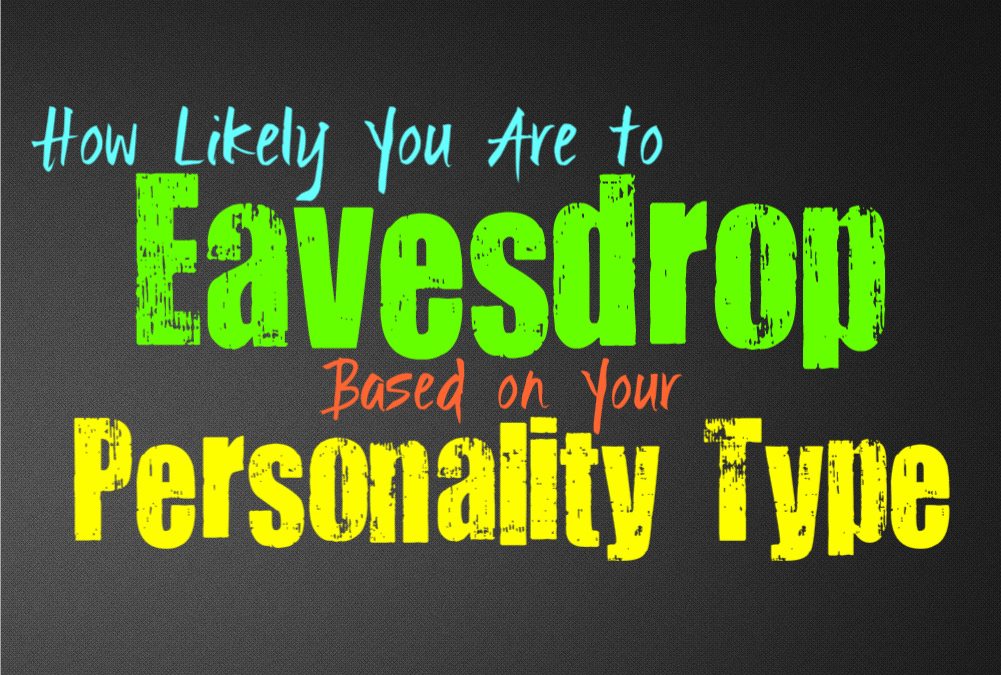 How Likely You Are to Eavesdrop, Based on Your Personality Type

Some people are more inclined to snoop a bit and find themselves eavesdropping out of curiosity. For other people this feels a bit insincere and even immoral in some ways. Here is how likely you are to eavesdrop, based on your personality type.

INFJs might have certain thoughts that contradict themselves, and so this can come into play with how they feel about eavesdropping. In certain circumstances it might be hard for the INFJ to refraid if they are hearing information that might be valuable or even rewarding. They care about their loved ones but they want to know how they actually feel about things. So sometimes they find their curiosity heightened and they have a hard time holding back.

ENFJs do have a side of them which can be drawn to a bit of gossip, as long as it is harmless. Their curiosity can sometimes cause them to eavesdrop if they are hearing something intriguing or rewarding. They might want to hear something that helps them learn more about the people in their lives. ENFJs might feel a bit regretful over eavesdropping too much, but at the same time they are capable of overlooking this if they didn’t cause harm to anyone because of it.

INFPs have strong inner morals and they try hard to follow them to the best of their ability. Because of this they might feel strongly against eavesdropping, since it is an invasion of someone else’s privacy. While INFPs might be curious people, they are likely against things that infringe on other people and feel dishonest in this way. They might find themselves participating in certain acts like eavesdropping, but they will likely regret it afterwards.

ENFPs are curious people and so sometimes this can get the best of them. They might find themselves eavesdropping on others, especially if it comes easily for them. They don’t do this to be dishonest, they just get swept up in the excitement. ENFPs are truly curious people who enjoy learning about others and find themselves listening in sometimes simply because they are hearing a bit of juicy information that they cannot tear themselves away from.

INTJs aren’t likely interested in eavesdropping in most situations, simply because they don’t find pointless gossip all that inspiring. If there is a situation where eavesdropping could provide the INTJ with useful information about something, they might find themselves intrigued by this. They treasure learning and being able to use information to move forward in a situation, and they will often use any opportunity presented to them. On some level the INTJ might find this immoral, but only if they were to use it in a harmful way.

For the ENTJ eavesdropping rarely provides them with anything valuable, but that doesn’t mean they can’t keep their minds open to it. If the ENTJ believes they can gain important information by eavesdropping, they might be more inclined to do so. They don’t really like taking part in drama like this, but sometimes they find themselves drawn to it out of curiosity. For the ENTJ life is about being efficient, and so this means having all of the information at hand.

INTPs aren’t usually interested in drama or gossip, since it feels a bit boring to them. Most of the time they try to avoid things like eavesdropping, especially if it won’t reward them in any useful way. INTPs do have a curious nature and sometimes this can take control a bit. If they find themselves deeply interested they might eavesdrop in order to learn more about someone and their intentions. This can come from curiosity but it can also be because INTPs have a hard time trusting most people.

ENTPs are curious people and so sometimes this can lead them towards things like eavesdropping. If they find themselves wanting to learn more about people, they might become curious enough to listen in on certain conversations. While ENTPs might feel like there is something a bit dishonest about this, they can also rationalize it in most situations. As long as they aren’t hurting anyone by eavesdropping, and are actually gaining something from it, they are likely to be okay with it.

ISTJs aren’t likely to be interested in eavesdropping, since this feels a bit dishonest for them. They respect privacy and believe it is important to give people space and allow them their boundaries. For the ISTJ invading someone’s privacy by listening in on personal conversations, is a bit dishonest and even immoral. They would rather allow people to share when they want to, since they want their own privacy respected as well.

ESTJs do believe in respecting the privacy of those around them, but at the same time they might have reasons for eavesdropping. They value efficiency and believe in getting things done, and sometimes this means they need more information than people are willing to give. If the ESTJ feels like they need to eavesdrop a bit in order to gain valuable information, they might overlook the more moral implications of it.

ISFJs aren’t fans of being dishonest or disrespecting their loved ones privacy, and so for them eavesdropping might cross certain lines. At the same time ISFJ care about taking care of others and sometimes this means they need more information than they might be willing to give. They can sometimes find their desire to understand others stands in the way, and so this causes them to eavesdrop when they ordinary would be against it.

ESFJs want to respect their loved ones privacy, but sometimes their curiosity can get them into situations they ordinary would be against. The ESFJ might find themselves needing to know more about someone and their intentions, and so they find themselves eavesdropping a bit. For the ESFJ as long as they don’t use this information in a negative way and it doesn’t hurt anyone, they won’t be against it.

ISTPs don’t really like eavesdropping since it can feel a bit dishonest and pointless. They would rather give people space, since they want their own privacy respected in this way as well. For the ISTP it is better to give people room and let them share when they feel comfortable doing so. Most of the time the ISTP just isn’t interested in gossip or learning information people aren’t interested in sharing.

ESTPs might find that their curiosity takes over, and pushes them to eavesdrop on someone because they want to learn more. They follow what they want in the present moment and sometimes this causes them to ignore potential ramifications. For the ESTP if they overhear something and find themselves curious, they rarely take the time to consider if they should be doing it.

ISFPs are curious people but at the same time they have strong inner morals. For them it can be hard to balance these two things, especially if they find themselves truly interested in what someone is saying. If they overhear something they might be more caught up in how they feel in the moment, rather than second guess whether or not it is the right moral decision.

ESFPs are curious people who enjoy being able to live in the moment and do what is most exciting for them. They likely have times where eavesdropping is a bit exciting for them, and so they have a hard time really refraining from it. ESFPs follow whatever is most interesting, and so they do sometimes become so curious that they continue to eavesdrop even when they know they shouldn’t.