Here’s How Much of a Worker Bee You Are, Based on Your Personality Type 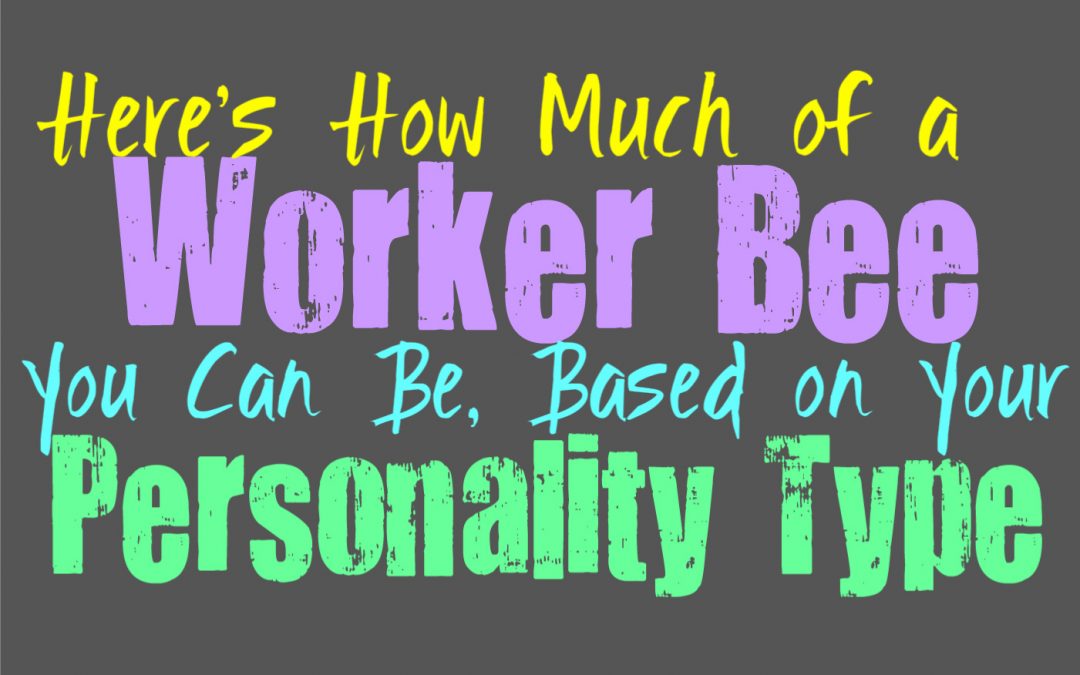 Here’s How Much of a Worker Bee You Are, Based on Your Personality Type

While some people prefer to find an easier way to progress or make money, others are constantly working their hardest. The worker bee is the one who does everything to be efficient at their job, and who continues to push themselves to be the best at what they do. Here is how much of a worker bee you are, based on your personality type.

INFJs aren’t often the worker bee type, simply because they rarely get caught up in the drudgery of their daily lives. While the INFJ often does have a decent work ethic, this simply comes from wanting to be a helpful and valuable human being. They certainly will do their best to work hard and be good at whatever they do. INFJs just have a hard time feeling like their job is truly fulfilling until they find something that makes them feel passionate. It can be challenging for the INFJ to find a career like this, and they might find themselves becoming a bit frustrated with the search.

While ENFJs strive to find a career that is fulfilling in many ways, they can often be seen as worker bees. They are always pushing themselves to be perfect at everything they do, and aren’t afraid to put in sincere effort. ENFJs are often busy, taking care of their loved ones and their household. They often enjoy being able to hold down a job that is stable and will continue to do what needs to be done. While the ENFJ does often appear like a worker bee in some ways, they are also very creative and can come up with ways to make money their own way.

INFPs really aren’t the worker bee types, and become bored with most jobs they find. It can be challenging for the INFP to find a career they are truly passionate about, and this often takes some time for them. Having to adhere to so many rules and follow the political aspects of climbing the career ladder, can be really frustrating for the INFP. It’s not that the INFP doesn’t have a strong work ethic, they simply have such active inner minds that they can become bored with the typical jobs available to them.

ENFPs are not really the work bee type, simply because they become bored too easily. They are more than capable of working hard and being efficient, they just need something that is fulfilling and challenging. If the ENFP finds a career that continues to challenge them and put them in creative situations, they will work very hard and continue to push themselves. ENFPs need stimulation in order to be capable of putting forth enough effort to really be seen as a worker bee. For them it is more about finding something that they are passionate about, and not becoming bored by it.

INTJs are definitely hardworking people, but they aren’t afraid of finding more efficient ways to get things done. For some being a worker bee means simply following the rules and pushing ahead, INTJs aren’t the types to do this. They will follow the rules that make logical sense, but will bend the ones that don’t at all. INTJs aren’t afraid of taking short cuts, to them they are more like creating a path that is the most efficient and useful. They work truly hard to learn and get things done, but they often do this in their own way.

ENTJs can sometimes appear like the worker bee type, simply because they are focused and driven. ENTJs rarely stand still for long and almost always feel like there is something they can be getting done. They are efficient people, who believe in finding the most effective way to take care of their work and their problems. While ENTJs will certainly be capable of taking on the challenging work, they also aren’t afraid to take the right shortcuts when need be. They know how to use their intuition and their problem solving abilities in order to manage their work efficiently.

INTPs really aren’t worker bees, simply because most jobs bore them far too easily. The INTP needs to find something that challenges them in creative and new ways in order to remain interested. For the INTP it is more about finding something that can help them grow and continue to carve out new paths with. They don’t like anything that keeps them going down the same monotonous path, which is why they aren’t often the worker bee types. They can certainly work hard, but often in a more mentally driven capacity. For the INTP it is about doing something that hold value to them, and helps them improve in new ways.

ENTPs aren’t often worker bees, even though they can certainly work hard. They prefer to find jobs that aren’t monotonous and might be seen jumping from one career to the next. They are rarely happy in a job that feels stagnant, and often need something unique and true to them. ENTPs need to feel challenged in order to find something that can keep their interest, or else they become bored far too quickly. For the ENTP it has to be something they are passionate about, or else they won’t feel inspired to put in maximum effort.

ISTJs are definitely worker bees, constantly pushing themselves to improve. They work hard in their jobs and want to build something they can be truly proud of. The ISTJ takes pride in what they do, no matter what it is they are working towards. For them it is important to always be improving and finding ways to be better in their careers. ISTJs aren’t afraid of doing the same tasks repeatedly, instead they enjoy being able to master each skill and each position.

ESTJs are definitely worker bees, since they strive to progress in their careers. The ESTJ takes pride in whatever they do, and doesn’t mind doing the same things for the rest of their lives. If the ESTJ is working in a job that they are truly good at, they will enjoy having something to be proud of. They want to be a valuable and helpful member of their community, and having a great career is a big part of this.

ISFJs are certainly worker bees, and will continue to push themselves to be good at their job. They often take pride in their careers and want to do something that their loved ones can be proud of. ISFJs often want to be able to provide for others, so they won’t be afraid of working hard for them. They also don’t become bored by a job that is the same thing over and over again, instead they often enjoy the comfort of this.

ESFJs can definitely be worker bees, especially when they feel the need to provide for their families. They often take pride in whatever they do, and want to be the best in their positions. ESFJs do want to advance though, and often work hard to become better and to grow in their careers. They simply want to do something their loved ones can be proud of, and want to find ways to provide for them no matter what.

ISTPs aren’t the worker bee types, since they prefer to live their own lives. They can become annoyed having to follow the rules and constant structure in many situations. While ISTPs can often hold down their own careers it usually involved problem solving and plenty of time to themselves. They aren’t fans of having to constantly push themselves for the sake of someone else’s benefit. ISTPs work hard on something when they are passionate about it and when it intrigues them.

ESTPs can actually be the worker bee types when they want to be, even though from time to time they can be reckless. They often work hard to get things done and might even have a strong desire to push themselves to climb their career ladders. They will certainly be capable of fulfilling their duties and doing whatever they can to grow and improve. ESTPs simply become stifled after a while and need some time to be a bit reckless and do their own things without limitations.

ISFPs aren’t really worker bees, since they are more like free-spirits. They believe in striving for a sense of independence and simply want to live by following their hearts. ISFPs might not be the most goal oriented people, instead they live in the present moment. They aren’t fans of having to climb some corporate ladder, instead they want to seek out the things that fulfill them and enrich their souls in a deeper way.

ESFPs are not often seen as worker bees, simply because they enjoy living in the moment. They want to live their lives with a sense of passion and excitement and dislike being held back by anything. While ESFPs can definitely be hard working people, they don’t want to do this in a way that keeps them from truly enjoying their lives to the fullest extent. They want to live with passion and need a job that helps them do this.