ENFJ Motivation: How the ENFJ Can Overcome Procrastination 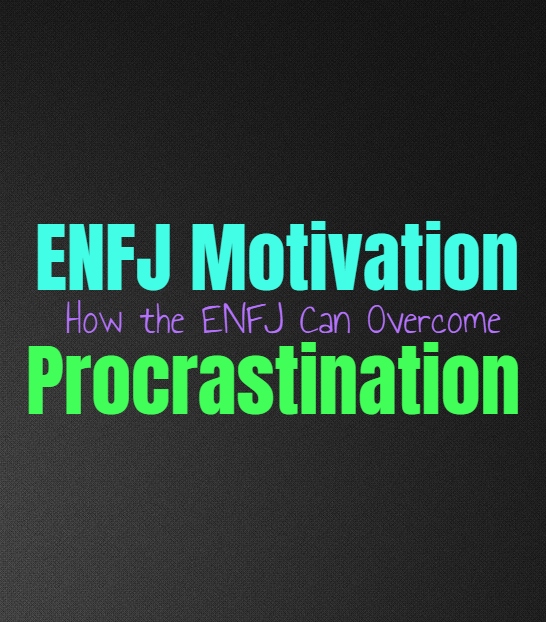 ENFJ Motivation: How the ENFJ Can Overcome Procrastination

ENFJs often appear like highly motivated and focused people, but that doesn’t mean they are incapable of struggling with procrastination. Sometimes their go-getter and perfectionist attitudes cause people to believe that the ENFJ never struggles with a lack of motivation, when this just isn’t the case. ENFJs deal with motivation issues and procrastination just as much as the next person, they just have their own ways of overcoming these struggles which can often be successful for them.

Why the ENFJ Struggles with Motivation

ENFJs are perfectionists, which can actually cause them to feel stuck at times. When they should be capable of focusing on the problem at hand, they find themselves not wanting to move forward. They become stuck on one aspect of their project or chore, trying to ensure that every detail is perfect. ENFJs might not always finish things in a timely fashion, simply because they are working hard to ensure that everything is up to their rather high standards. This can make finding motivation a challenge at times, since the ENFJ is aware of their own perfectionist tendencies. They know that once they take something on, it will be a long and sometimes exhausting process. They are well aware that this means taking a lot of time and energy to ensure that they can perfect even the smallest of details in this task. ENFJs hold themselves to such high and often unrealistic standards, and this can certainly cause them to feel overwhelmed and even find themselves procrastinating on certain tasks. Nothing ever truly feels finished for the ENFJ, and so they often leave things until the last minute to actually consider them done and ready to move on from. They do often find the energy to finish things just in the knick of time, but this doesn’t mean they won’t take up every last second to ensure they have no time left to invest in this project or task.

Letting others down is often a very real fear for the ENFJ, and this can sometimes halt their motivation. They put so much pressure on themselves to make everyone happy, and this can actually weigh them down at times. If the ENFJ is fearful that taking on certain tasks could leave them feeling like a failure in the eyes of someone they love, it will certainly make it difficult for them to find motivation. They don’t want to take on something if they don’t see it turning out great in the end, and so if they are obligated to do so it might be something they procrastinate for a long time. Feeling like they might let someone down is really difficult for the ENFJ to swallow, and so it can cause them to hold back on a lot of things. Often when the ENFJ just doesn’t feel motivated, it can certainly come from a fear of failure, and a fear of letting others down.

Feeling overwhelmed from taking on too many things at once can also be another reason why the ENFJ lacks motivation. When they take on so many things in hopes of pleasing everyone, they might burden themselves far too much. ENFJs often hold themselves to unrealistic standards and might feel like they should be able to take on more than anyone else can. This can cause them to take on these tasks and projects, and find themselves without the time to actually finish them all. Feeling overwhelmed and weighed down can cause the ENFJ to feel a bit stuck, and not really know where to begin when this occurs. Any sense that they might not be able to get everything done in time, can really overload the ENFJ and cause them to feel stressed and unsure of how to proceed.

How to Beat the ENFJ Procrastination

Sometimes it is important to remember that procrastination isn’t always the absolute worst thing. ENFJs sometimes need that last minute deadline in order to get things completed. They really do best having deadlines and if they do want to get something done earlier then they need to have earlier deadlines set for themselves. They need these types of schedules and timers to help them find this motivation. When the ENFJ does not have a deadline on something they are much more likely to lose motivation, since they are likely to prioritize the tasks which need to be finished in a more timely manner. Organization really is the key for the ENFJ when it comes to being motivated and being capable of getting things done.

When they are feeling stressed it is also important for the ENFJ to take some time for themselves, without feeling guilty about this. Setting a timer and just giving themselves some time, or even a couple days, of just relaxing and doing what they enjoy is truly necessary for the ENFJ. They can overload themselves and become so focused on working and getting things done, that they forget to recharge their own batteries. They need to give themselves this time to relax, or else they will lack any real motivation when it comes to their obligations. If the ENFJ does take this time then they are likely to feel refreshed and ready to take on their tasks afterwards. Without this self-indulgent time they are going to feel exhausted and really struggle to find a sense of mental clarity. They rarely take this time for themselves, it just isn’t natural for the ENFJ. At the same time this is often a major reason why they lack motivation and so it is really necessary.