Do You Have a Relationship Checklist, Based on Your Personality Type 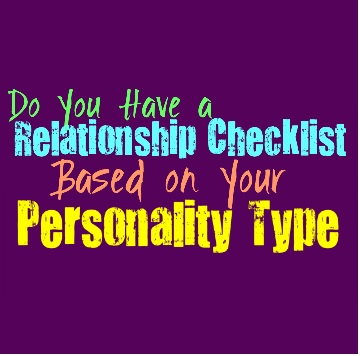 Do You Have a Relationship Checklist, Based on Your Personality Type

When it comes to relationships some people have a checklist of the things they want and do not want. They can be somewhat strict about adhering to this, and will turn down people who don’t meet certain criteria. While some people are this way with relationships, others prefer to let things happen naturally and will go after the people they are drawn to and not who seem to fit a checklist. Here is how likely you are to have a relationship checklist, based on your personality type.

INFJs are likely to have certain qualities they are looking for in someone, but they usually don’t fall for a checklist. They might have one in mind, and find themselves making a mental list of the things they want and don’t want in a person, but this often goes right out the window. They might find themselves wanting to create some sort of criteria to avoid getting into relationships with people who are not right for them, but ultimately INFJs lead with their hearts when it comes to love and romance. They often find themselves falling for people without really looking at the logic behind it.

ENFJs often have a checklist of qualities and things they want in a person, simply because they want to find someone who is right for them. They might believe that creating a checklist of the criteria they really want in a partner, is going to help them find someone who is better suited to them. ENFJs are caring people who do a lot for those around them, and so they often find themselves in situations where they can be taken advantage of. Because of this they might set higher standards at first and want to look for someone who fits the future and lifestyle they want.

INFPs are definitely not people who make a checklist for relationships, and are much more open about who they will date. For the INFP it is more about finding someone who sparks their soul and makes a connection with them that is deep and meaningful. They are searching for someone who they can truly connect with, and this doesn’t have to include specific traits or some sort of checklist which doesn’t really represent who they are. INFPs want to dig much deeper than a simple checklist, and so they rarely even make one.

ENFPs aren’t likely to make a checklist for their relationships, since this feels a bit too strict for their taste. They like to be a bit more open and allow themselves to get to know someone before whipping out their checklist of criteria they need to date someone. ENFPs want to make connections which are deep and passionate, instead of something based on facts and shallow things. For the ENFP it is important to find someone who excites and challenges them, but they are open to many different traits and types of people.

INTJs are logical people and so they often base their relationship choices off of more rational things than just their feelings and emotions. Because of this the INTJ might have some sort of checklist for the traits and details they are looking for in a partner. While they don’t do this to be uptight or strict, it is more about ensuring that they can build something real and lasting. INTJs do want someone who challenges them and inspires them, but they are also looking for qualities they know can sustain a lasting relationship instead of something that will fizzle out.

ENTJs do sometimes possess a checklist for things like their relationships, only because they are looking for more than some fling. They want to make sure their commitment will last, and they take this decision very seriously. ENTJs don’t let people into their lives unless they can trust them completely, and so they take time to be sure. While ENTJs do consider their feelings towards someone, they also want to be sure this person possesses traits and qualities which can ensure a strong foundation and a lasting relationship.

INTPs are the type of people who might consider creating some type of checklist, especially if they have been hurt in the past. They will analyze their options and think about which traits and qualities are best suited to a lasting relationship. INTPs are good at analyzing information and doing their best to come up with a plan that is truly logical and creative. While the INTP might create a checklist, they often have a hard time actually sticking to it. They sometimes become so drawn towards someone that they toss their checklist out the window, which can sometimes be a mistake.

ENTPs aren’t likely to have a checklist before entering into a relationship, but it is something they might consider down the line. ENTPs sometimes jump into things headfirst because they want to really experience it before making their final conclusions. They can be romantic when it comes to their feelings towards someone, and might be drawn to the more passionate side of a person. At the same time ENTPs are logical and rational people who will do their best to assess the situation before getting too serious with someone who might not be right for them.

ISTJs do sometimes have checklists for their relationship dos and don’ts, mostly because they are rational people. They prefer to approach things in life from a more practical point of view, rather than be emotional about it. For the ISTJ it is important to take the facts into account before stepping into a relationship. They take their commitments very seriously and so they want to be sure they are making a choice which will ensure a lasting relationship and not something that will fizzle out quickly.

ESTJs might have some sort of mental checklist when it comes to what they want from a partner. They take their commitments very seriously and so they want to be sure they are making the right choice before taking that next step. When the ESTJ is looking for a serious relationships they want to be positive the person has the qualities that will mesh well with them. They often approach this from a more practical point of view, since they believe in making their relationships last.

ISFJs are warm and empathetic people, but they can also be rather practical. Because of their more practical side they often find themselves making checklists about most things in their lives. When it comes to finding the right partner to spend their lives with, ISFJs want to be sure they are making the best choice possible. This might cause them to make some sort of mental checklist about the qualities and traits they want to find in their romantic relationships. For the ISFJ it is about making sure they have someone they can truly make it work with for the rest of their lives.

ESFJs might have some sort of mental checklist when they are younger, especially if they are around people who hold them to rather high standards. This checklist often includes certain traits they think are best for a partner, and the ESFJ might want to make sure they search for those qualities in someone. While they might develop this at a young age, most ESFJs find themselves having a hard time actually sticking to it. They find themselves more lead by their feelings towards someone when it comes down to their choice to get into a relationship.

ESTPs aren’t likely to follow a checklist when it comes to relationships, since they go after what they want and enjoy connections that are passionate and exciting. For the ESTP it isn’t about some strict plan for their future, they just want to find someone they can connect with who makes them feel more alive. ESTPs just don’t dig too deep into things, instead they want to take life as it comes and go after what feels right for them.

ISFPs are definitely not checklist people, especially when it comes to matters of the heart. When it comes to love and relationships they want to find someone who inspires them and makes them feel wonderful things. For the ISFP it is about falling in love with the person’s heart and soul, not about their qualities and traits that fit into some sort of strict checklist.

ESFPs are not often checklist people when it comes to their relationships, instead they focus on following their heart and going after the people who inspire them. ESFPs are often romantics at heart, and so they just want someone who makes them happy. They don’t need to make it into something complicated, they would rather do what feels right in the moment instead of having to stress about someone’s traits that don’t fit into some sort of checklist.