Do You Believe in Making Amends, Based on Your Personality Type 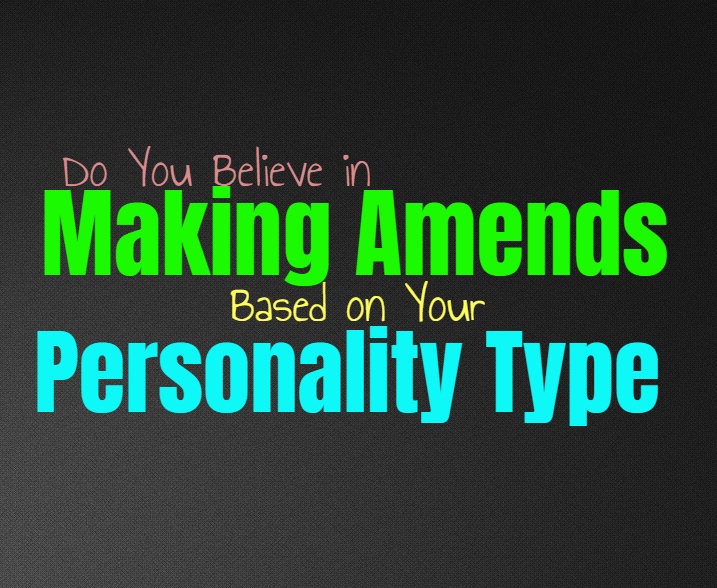 Do You Believe in Making Amends, Based on Your Personality Type

Some people are deeply touched by the belief that they can make amends for any mistakes made, and reconnect with people they’ve had trouble with. They will be willing to put forth the effort to make amends for any wrongdoings, and often feel inspired by this notion. For others it can seem like a bit too much work, or simply like a bit of a pipe dream. Here is how you feel about making amends, based on your personality type.

INFJs definitely believe in making amends and hold onto this belief very strongly. They feel a lot of guilt for any failures or mistakes they might make, and want to find ways to make up for these things. INFJs often think about what it would mean to be able to make amends for their past, and also believe that other people should be given this opportunity. They hold onto their beliefs in things like making amends and searching to become a better person, and so for the INFJ this is truly important. They want to do whatever they can to make themselves better and to make up for the past.

ENFJs don’t like making mistakes but they do believe in working to make amends for those failures. If they have done something wrong or feel guilty for something, they want to be able to work towards making the situation right again. ENFJs don’t like just leaving those mistakes behind, especially if they can make things better and improve. They strive to be good people and believe in doing whatever they need to in order to become better. ENFJs also believe in giving other people a chance to make amends and fix themselves, and often feel this is deeply important.

INFPs absolutely believe in making amends and often feel it is an important part of life. They realize that people make mistakes and often feel they make plenty themselves. INFPs want to seek out ways to improve themselves and strive to be better people. For them it is important to always find ways to become better on the inside, and to always want to do the right thing. They know that this isn’t always an easy journey, and so they believe in being able to make amends when they fail sometimes.

While ENFPs often believe in making amends, sometimes the idea of it can seem a bit far fetched. It can be challenging for the ENFP to find ways to sincerely make amends, sometimes they simply try to charm their way out of difficult situations. They feel better if they can make amends but sometimes it can feel a bit unnerving having to actually go through this process. ENFPs can be fearful that others will judge them and won’t sincerely accept their attempts to change and make things right.

INTJs do believe in trying to fix their mistakes, but often they do this with intention. They will give people the opportunity to make amends, especially if they are being completely sincere. It is challenging for them to really give people too many chances though, since they have a hard time believing that most people will be willing to change. INTJs do their best to make up for anything they feel like could have done better, but they also try hard to avoid making mistakes in the first place. For them it is better to get it right the first time, rather than to feel like they need to make amends later on.

ENTJs can sometimes be uneasy with the idea of making amends, mostly because they dislike making mistakes which they need to make up for. ENTJs want to get things right the first time around and can actually be rather hard on themselves if they aren’t capable of doing this. They work hard to get the job done, but if they do make mistakes they want to find a way to make this right. ENTJs believe it is possible to make amends but they can weary of people who try to, simply because they realize that change can be hard.

INTPs often do believe in things like making amends and striving to improve themselves, but they often over-analyze these thoughts and feelings. They can think about certain ideals like making amends, and this is something that causes them to consider all of the angles. INTPs might wonder if making amends is truly something people can do, or if their past will always be with them in some ways. They will likely take a lot of time to really think this through before coming to a very personal conclusion.

ENTPs believe in a lot of different ideals and thoughts, and enjoy exploring things like being able to make amends for their actions. They want to really think about if this is possible and will often try to explore it themselves. ENTPs will try to make amends for their past in hopes that they can actually learn more about themselves and those around them. They might have their doubts about whether or not people can truly make up for these mistakes, but they do enjoy believing that it is possible.

ISTJs believe in doing their best to get things right the first time, and often feel like needing to make amends is a bit of a failure. They feel like people should put forth all of the effort they can right away, instead of slacking and trying to make up for it later. For the ISTJ it is important to work hard and to make sure they don’t fail or make mistakes. They don’t have much patience for laziness, and feel like a lot of people just don’t try hard enough to get things right. While they do often feel like things should be done properly right away, they do their best to make amends if they somehow miss the mark.

ESTJs don’t like making mistakes and often take failures very harshly. While they feel like it is important to get things right the first time around, they do often believe in being able to make up for their mistakes. ESTJs strive to get things right and put a lot of effort into always doing their best. For people who have a tendency to be overly laid back, the ESTJ can feel like this is simply laziness and an inability to commit to their actions. They believe in making amends when it comes from a sincere place, instead of just trying to get away with a lack of effort.

ISFJs definitely believe in making amends, and often feel like people should do their best to make up for their past. They realize that people make mistakes and cannot be perfect and they often value the people who do their best to fix these errors. While ISFJs might take a while to forgive someone who has done a lot of things wrong, that doesn’t mean they don’t believe in giving them a chance to try again. ISFJs want to make amends for anything they might have failed at before, but they can be somewhat hard on themselves when it comes to these things.

ESFJs definitely believe that people should be allowed to make amends, especially if they are sincere about it. They do their best to be forgiving towards others, especially the ones they see potential in. ESFJs want to try and make things right when they make mistakes, and work hard to make amends for anything relationships they might have lost in the process. For ESFJ it is definitely important to make amends, instead of just allowing their mistakes to go unchanged.

ISTPs often believe in being able to make their own choices freely, without having to constantly worry about what other people think. If they do sincerely believe they have done something wrong and need to make up for it, then ISTPs certainly believe in making amends. They often live their lives in the moment and so this does sometimes lead to making a few mistakes or doing certain things they really need to make up for. They do their best to make amends when they feel it is necessary, but don’t feel like every mistakes requires this.

ESTPs believe in following their own path, and often live very much in the present moment. They go after whatever inspires them most, but sometimes this leads them to making a few mistakes. ESTPs will do their best to make up for any harm they feel like they have done, and so for them making amends is important. While they don’t feel like doing this for every single mistake, they will try their best to make things right with the more important aspects of their lives, mostly their relationships.

ISFPs believe in a lot of important ideals, especially things like making amends. For them it is important to follow their heart and strive to be better people. They don’t want to just go through life without trying to make things better, and want to do what they believe is right. They have strong inner morals and because of these morals ISFP truly want to believe in things like making amends. They want to improve themselves and strive to be good people, and so for the ISFP making amends is truly important.