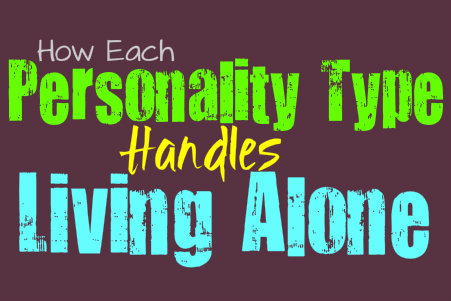 Some people love the idea of living alone, but struggle with the actual experience. Here is how each personality type handles living alone, and how they can cope with it better.

Most INFJs actually enjoy living on their own, especially if they can handle this financially. As long as they aren’t overwhelmed with financial stress, the INFJ will enjoy having this freedom. Being able to spend plenty of time doing what they enjoy is a great thing for INFJs. It is best for them to have some kind of pet to keep them from feeling lonely on those long nights. As long as they have that physical connection of an animal that they can cuddle with, the INFJ will be very happy on their own. They will do best to make sure they stay in touch with friends, but having this choice to see people when they want is really beneficial for them. Being able to call a close friend if they are over thinking about sad things, can help the INFJ cope with living on their own.

ENFJs often like the idea of living on their own, but it usually is not as positive as they believe it will be. ENFJs enjoy social interaction, and will become anxious if they are alone for too long. They enjoy having some time to themselves, but too much time is actually overwhelming for the ENFJ. Connecting with loved ones is very important to them, and they will do best if they are living with someone they care deeply for. Living with people who get on their nerves or do not give them space is entirely different though. ENFJs simply do best if they can live with someone who they trust and care for deeply.

There are certain things that INFPs truly love about living alone. They enjoy having plenty of time by themselves to do whatever they please, but after a while the loneliness can get to them. It is important for the INFP living on their own to remain connected to the outside world. They will do best if they have a job that does not allow them to isolate themselves and actually helps them remain connected to people. This will help the INFP feel more positive about the time spent alone after their work day has ended. They have rather active minds, which can cause the INFP to overthink about sad things when they are by themselves. They will do best if they have people who they can spend plenty of time with, and those who will come visit them often.

ENFPs often love the freedom that comes with living alone, since they are rather independent people. They enjoy being able to be as noisy as they want, without feeling like they are bothering their roommates. ENFPs enjoy the ability to make their own choices, and have people over on a last minute whim- or even dance around the house singing along to their favorite music. Just the simple ability to do whatever they please makes living alone really enjoyable for ENFPs. They do however enjoy having plenty of things to keep them entertained, or else they will become bored and overthink about negative things. ENFPs do best living alone if they have friends and loved ones who can visit them often.

INTJs often love living alone, as they enjoy the independence that it allows them. Being able to do whatever they please, without feeling pressure from other people, is honestly wonderful for an INTJ. They prefer to spend most of their time alone anyways, and feel more energized when they can spend hours thinking through things. INTJs might become too caught up in their own minds, and can forget certain physical things if they are alone for too long. As long as they make sure to keep themselves connected to the outside world, they will do very well living on their own. INTJs with a job that force them to socialize can really benefit from having plenty of alone time after work. They will also do best to remain on some sort of schedule with eating, so that they don’t become too distracted to keep themselves healthy.

ENTJs enjoy the freedom that comes with living alone, but actually might struggle with certain levels of loneliness. ENTJs enjoy social interaction, and prefer having people to spend their time with. ENTJs living alone will do best if they keep themselves active and participate in some external stimulation. Having friends who come over all the time, and enjoy keeping the ENTJ company, will help them cope with being alone. ENTJs enjoy having a certain level of independence, but also prefer to have people around them to brainstorm and work through things. Being that they are natural leaders, they often don’t mind having people living in the same home as them.

INTPs have a tendency to forget about their physical presence, which can be a bit dangerous if they are living on their own. INTPs get so wrapped up in their internal world, that they can lose track of what is happening around them. They will often enjoy being able to have plenty of time by themselves, especially the ability to have freedom to make their own choices. They simply have to find a way to ensure that they don’t become too lost in their thoughts, and actually continue to feed themselves and care for their physical health. INTPs actually do best if they have a roommate who gives them plenty of space, but who can keep them connected to the world around them. As long as the INTP who is living alone can keep themselves active in different hobbies, they will be just fine.

ENTPs are very independent people, but can often struggle with the idea of living by themselves. They have extremely active minds, which can sometimes create anxious feelings when they are alone for too long. ENTPs do, however, struggle with having people constantly in their business- which can make them want to live on their own. The best solution for the ENTP who struggles with living alone, but wants to make it work, is simply for them to keep busy. ENTPs living on their own will do best if they have plenty of hobbies and external stimulus. Instead of sitting around their home all day just feeding on their own thoughts, the ENTP needs to become active in something that keeps them connected to the outside world.

ISTJs often find that living on their own is a wonderful experience, which allows them plenty of freedom. They are naturally independent people, and really don’t enjoy being crowded by others. ISTJs who work with other people often do very well living on their won. Being able to be by themselves after a long day surrounded by people is truly refreshing for the ISTJ. They rarely feel lonely, and often enjoy being able to decide when they interact with others. They will likely schedule times to have their family and loved ones come visit them, but it is nice having the option instead of it being forced upon them.

ESTJs actually do great living by themselves, and enjoy being able to make their own choices. ESTJs are extremely meticulous, and enjoy making sure that everything is running efficiently. Living with other people can be frustrating for ESTJs, because they often feel like their space is being invaded. Seeing people do their chores in a substandard way can really get on the ESTJs nerves. They prefer to do things themselves most of the time, since people rarely live up to their expectations. Because of this, the ESTJ generally enjoys living on their own, with plenty of freedom to do as they please.

ISFJs often enjoy the freedom that comes from living alone, but might begin to miss their family. ISFJs are rather independent people, but they do care for people very deeply. Not being able to tend to the needs of their loved ones can actually become frustrating for the ISFJ after a while. ISFJs definitely enjoy having plenty of time by themselves, but might be unhappy if they cannot see their family often. The time alone is wonderful, but they will likely become anxious after a while and want to invite family and loved ones over.

ESFJs oddly do not mind living alone, and might enjoy the freedom to do what they please. They do however struggle with loneliness if they do not have plenty of people to keep them company when they need it. ESFJs can easily live alone without dwelling on negative thoughts, which is something many other extroverts struggle with. They often enjoy the extra space to focus on themselves, since they rarely get this chance when they are around others. ESFJs focus so strongly on caring for other people that being alone actually gives them a chance to recharge. Some ESFJs might struggle with loneliness, so they will do best if they have a pet with them.

ISTPs truly enjoy being alone, and often thrive when they have their own place. They enjoy having plenty of freedom to do whatever they please, without feeling pressure from someone else. Being able to have all of this space by themselves, is great for the ISTP. They might become lonely after a while, and will feel isolated and disconnected from the outside world. ISTPs actually do well if they live with roommates, but have plenty of space to do their own thing. Being able to communicate with roommates who give them plenty of space, is actually good for them.

ESTPs often enjoy the freedom that comes with living by themselves, but they might become anxious after a while. Having too many negative thoughts can cause the ESTP to dislike being alone for too long. They will do best if they have a couple pets to keep them company, and plenty of friends they can communicate with. ESTPs do enjoy their independence, but they can struggle with loneliness if they are living by themselves. They prefer to keep busy, and are constantly seeking out new adventures in their lives. Being able to easily contact their friends makes living alone much easier for the ESTP.

ISFPs enjoy having independence, and enjoy being alone most of the time. Having the space to do whatever they place is great, but loneliness can overcome them if they are living by themselves. ISFPs do their best if they have roommates who care about them and also give them plenty of space. ISFPs are over thinkers, which can cause them to dwell on negative thoughts. If they spend too much time in their own heads, it can cause them to think about things that make them feel sad. ISFPs will do best if they live with someone they care for very deeply, and who they can trust.

ESFPs enjoy being around people which can cause them to dislike living alone. They enjoy independence though, and will often continue going out in order to keep themselves active. Even if they are living alone, most ESFPs will be capable of finding plenty of social interaction. This makes living alone a bit easier for them, since they often do not spend too much time by themselves regardless. ESFPs enjoy being the life of the party, and often feel very comfortable living with other people.