INTP Soulmate & Best Match: How to Find Your Ideal Match 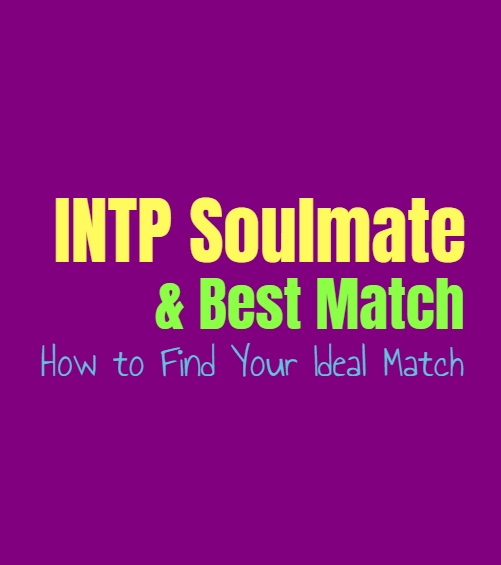 INTP Soulmate & Best Match: How to Find Your Ideal Match

When it comes to finding your soulmate or ideal match, some people hunt their entire lives for something they deem worthy. For others this might not be something they are quite as open to, and they might have a more cynical mindset. The logical minded people often try to find other answers for what a soulmate is, and may not even believe that they exist. For the INTP this can be a complicated idea, something they often struggle back and forth with. They aren’t as unfeeling and cold as people think, and for some INTPs their inner hearts are drawn to the desire to share their lives with someone truly special.

What a Soulmate is to Them

While on the surface the INTP often attempts to make logical sense of everything, that doesn’t mean they don’t consider the idea of a soulmate and what it would mean to them. INTPs might even spend time researching this idea, and how it could be explained in a much more logical manner. While they might not necessarily believe in the soulmate as one person they are fated to, they might have their own idea of what it means. They likely settle on something less dramatic than the belief that there is only one person for everyone, instead they might feel we can have more than one soulmate or person who is our ideal match.

That doesn’t mean the INTP can’t think of this in a romantic sense, but to them it seems much more hopeful and logical if this is something that you can find with more than one person. They likely see the soulmate as someone who sparks your emotions and makes you feel excited to grow with them. Someone who makes sense of their unique qualities and understands them like no one else. That idea of having someone who can see through their walls and understand them without constantly seeing what is on the surface, this is likely how the INTP views the soulmate. To the INTP finding a person who not only understands them but appreciates what they see, someone who can communicate with them openly and clearly, this is actually a rather romantic notion of a soulmate to them.

The War Between Heart and Head

For the INTP there is often quite the battle between their heart and their head. They are logical people who enjoy analyzing and looking at the facts, but they are also immensely curious people. They enjoy exploring different paths and things which don’t have clear facts or proven evidence in front of them. They also can have a rather romantic and passionate soul, one which most people do not get to see. Underneath the many layers the INTP can have a more sensitive heart than anyone gets the chance to know, and this is the part of them which likely yearns for a soulmate or someone who can really understand them. INTPs are often unsure of how to approach their inner emotions and might try their best to push them aside. They just don’t naturally know how to deal with them, since they don’t have facts or ways of applying logic to all of these feelings. Because of this they do seem more direct and less emotional, but that doesn’t mean the INTP doesn’t feel things or care deeply about others.

When it comes to finding their ideal match or their soulmate, the INTP does need to learn to open themselves up to this more. Of course the right person is going to see beyond those walls and be willing to wait patiently for them to show themselves, but that doesn’t mean they can wait forever. The INTP also needs to be receptive to love and finding someone they can really be themselves with. When they sense that someone is special and can be trusted, then the INTP will do well to start letting down some of those walls. This doesn’t mean they have to rush into something or open up right away, but it is important that they let themselves take a chance once in a while. Giving themselves the opportunity to find their match is completely necessary if they really want to achieve this goal, opening up is just part of the process when it comes to finding love.

INTPs need someone who is patient and who does not smother them constantly. They need time to themselves, and they need someone who understands where they are coming from. INTPs need space but that doesn’t mean they don’t care and don’t really want to be close to their partner. Without having someone who understands why they need space, the INTP will start to resent this connection. Their soulmate is someone who can give them that time without making them feel guilty for it. Someone who can feel close to the INTP without constantly invading their need for time alone.