INTJ Soulmate & Best Match: How to Find Your Ideal Match 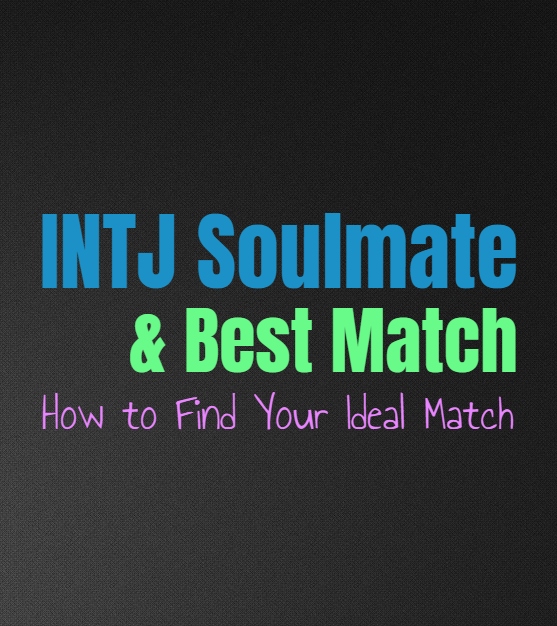 INTJ Soulmate & Best Match: How to Find Your Ideal Match

When it comes to love and romance, some people are just more inclined towards logic and proven facts. For the INTJ falling in love is something which can be difficult at times, since they want to apply logic to the situation as well. When it comes to their soulmate and finding their ideal match, the INTJ often has their own beliefs about what this means, and might even be a bit cynical at times. They are more drawn to facts and things which can be proven, which does make emotions and romance a bit tricky for them.

What a Soulmate is to Them

For the INTJ the idea of a soulmate might be something a bit more difficult to really believe in. They are logical people who are very focused on facts and things with concrete evidence to support them. The idea of a soulmate is often based on something far more emotional, things like love and someone being perfectly made for you. If the INTJ does believe in soulmates, they often see them as much different than the more romantic minded person.

To the INTJ a soulmate would be someone who is matched to you based on their qualities. It would likely mean that you can possess more than one soulmate in your lifetime, and more than one person who would be your ideal match. The idea of only one person in the world being meant for you, often seems too far fetched for the INTJ to really grasp onto. INTJs who believe in the idea of a soulmate will see that as someone who challenges them and inspires them to be better. Someone who understands them and connects to their soul in a way that very few people are ever capable of doing. Just because INTJs are logical does not mean they don’t believe in love, it just means logic is important to them.

The INTJs Logical Mind and Romance

While there are sometimes ideas that the INTJ is not a romantic person, that is not always the case. While some INTJs might shy away from romance, there are plenty of them who possess the heart of a true romantic. They just don’t want to spend time and energy investing in someone when they don’t have sincere feelings and intentions towards them. When the INTJ is romantic towards someone it is not out of obligation, but simply because they want to be. Many INTJs possess rather poetic qualities and can really know how to woo someone when they are attracted to them.

Many INTJs do crave connection and want to find someone they can really share their lives with. It just isn’t an easy process of balancing their romantic side, with their very logical minds. They believe in things which can be proven and so even in relationships they will apply practical ideals to deciding who to be with. When they get to know someone and see true potential in their connection, the INTJ often wants to look at a checklist of how compatible they are. They want to look at the facts of the situation to see if they can truly make their relationship work. While to some this seems cold and unromantic, to the INTJ it means they are serious about this person and can actually consider spending their lives with them. When the INTJ commits to someone they take this seriously, and don’t like wasting their time when they can’t see building a future with them.

Finding a way to balance their heart and their head can be a challenge for the INTJ, but it is important. They certainly can and should apply their facts and research into the situation, but also need to learn when it is time to stop. When their heart is telling them they should open up and connect, they need to listen to themselves as well as their own intuition. INTJs who trust in this intuition will do better when it comes to love and finding their true soulmate.

When it comes to finding their true match the INTJ really needs someone who understands them on a deeper level. They need a partner who sees their need for space and does not take this personally. Someone who realizes that they need to be alone, but that they are still important without always needing this to be verbally expressed. INTJs aren’t naturally mushy or overly emotional people, and so they really need a partner who can be patient and appreciate their true intentions. That doesn’t mean the INTJs wants stagnancy though, since they do thrive with someone who helps them grow and challenges them in unique ways.

INTJs need a partner who sparks their heart and soul, as well as their minds. Someone who can challenge them and make them see things from a new angle, but also in a very intelligent way. INTJs need a partner who is intelligent but also has a certain sense of warmth towards them. A person who makes them see other parts to themselves, not just the parts they portray to the world. INTJs also crave someone who is loyal and willing to stand by their side through whatever might come their way. The INTJs true soulmate will be understanding and supportive, but also completely honest with them even when it seems hard sometimes.