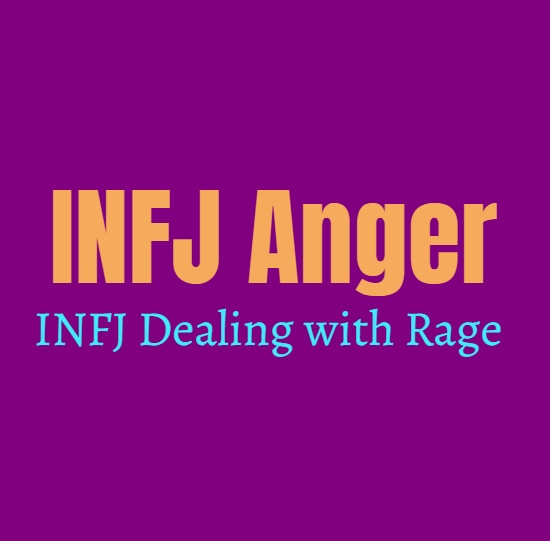 INFJs definitely deal with emotions on a deep and personal level, but don’t really focus on them the same as some other types might. They care about the emotions of those around them, and want to focus on helping others in most situations. When the INFJ is angry they might try to find other ways to deal with this, and might not entirely process it as openly as they should. INFJs can sometimes choose to push aside their own emotions, in hopes of helping other people deal with their problems. While they do sometimes bury those emotions, there are times when their anger certainly finds a way to express itself. When INFJs are sincerely angry and choose to express this, it can actually be something which leaves others feeling frightened with just how intense it is.

INFJs become angry about normal daily frustrations, but they can process those small things somewhat easily. The healthy INFJs knows how to cope with the little things which bother them on a day to day basis, but it is often dealing with people and humanity which bothers them. INFJs can become caught up on seeing how people behave or treat others, and this is certainly something which upsets and angers them. INFJs can become bothered by how they see people treat those around them, and this is something which becomes deeply unsettling to them. They care about people and want to be able to have faith in others and believe in the best in them. When INFJs continuously witness injustices in the world it can cause them to become distanced from the world, and in some cases causes them to become very angry.

When the INFJ is truly upset with an individual they try to express this without allowing it to get out of hand. There are however, instances where they can experience a rather intense and justified anger. One of the most likely situations for the INFJ to really explode on someone, is when that person hurts another individual, especially someone the INFJ loves. They can become very protective of their loved ones and don’t want to just allow people to hurt them. When they witness someone they care for in pain, the INFJ can become extremely protective. They are caring people but can have a somewhat vicious side when the situation calls for it. The INFJ can really unload on this person, and often has a way of knowing their weaknesses and how to tear them down. When this rage comes out from the INFJ it can be rather intimidating, especially since most people won’t really expect this from them. The normally caring and even sometimes reserved INFJ, becomes aggressive and fierce. This is something they are only likely to do when they have been truly pushed over the edge, and see no one means of dealing with the situation.

Coping with the INFJ Rage

INFJs are people who are often riddled with feelings of guilt, even when they have done nothing truly wrong. They experience a sense of guilt over their own actions, always feeling as if they could have done better or helped others more. INFJs care about those around them, and they care about the state of the world. They place a lot of pressure on themselves to be there for their loved ones, but can also be perfectionists when it comes to their own actions and goals. INFJs can easily experience guilt if they believe they could have done better, or if they should have done something more for those around them. It becomes difficult for them to cope with those moments where their rage gets the better of them, as they likely feel rather guilty over it. The INFJ is especially likely to feel guilty for expressing this anger if they have done it for more personal reasons, rather than defending someone they love. They can easily justify their own actions when they are protecting another person, but if it is for themselves it becomes difficult for the INFJ to really move on from their own guilt. Even when they realize that they made the right choice, it still becomes something that they will have doubts about later on.

INFJs can sometimes struggle to process their own emotions because they focus so much on tending to the needs of others. They can feel guilty for taking time for themselves, but this is something which is entirely necessary for them. If the INFJ really wants to be able to process their anger or frustrated feelings, they need to take time for themselves to really do this. Instead of avoiding those emotions and burying them for the sake of someone else’s needs, the INFJ really should take some time to dive into their own emotions and their own inner desires. Putting themselves as a priority is actually something which will help the INFJ overcome those angry feelings, and help them to find better tools for processing what they are dealing with. They are highly intuitive people who are often capable of uncovering the best path for themselves and others, they just need to learn to really trust in themselves more. When the INFJ does learn to rely on their own sense of intuition and judgment, they become more equipped to handle their own rage.