Here’s How Often You Create a Bubble, Based on Your Personality Type 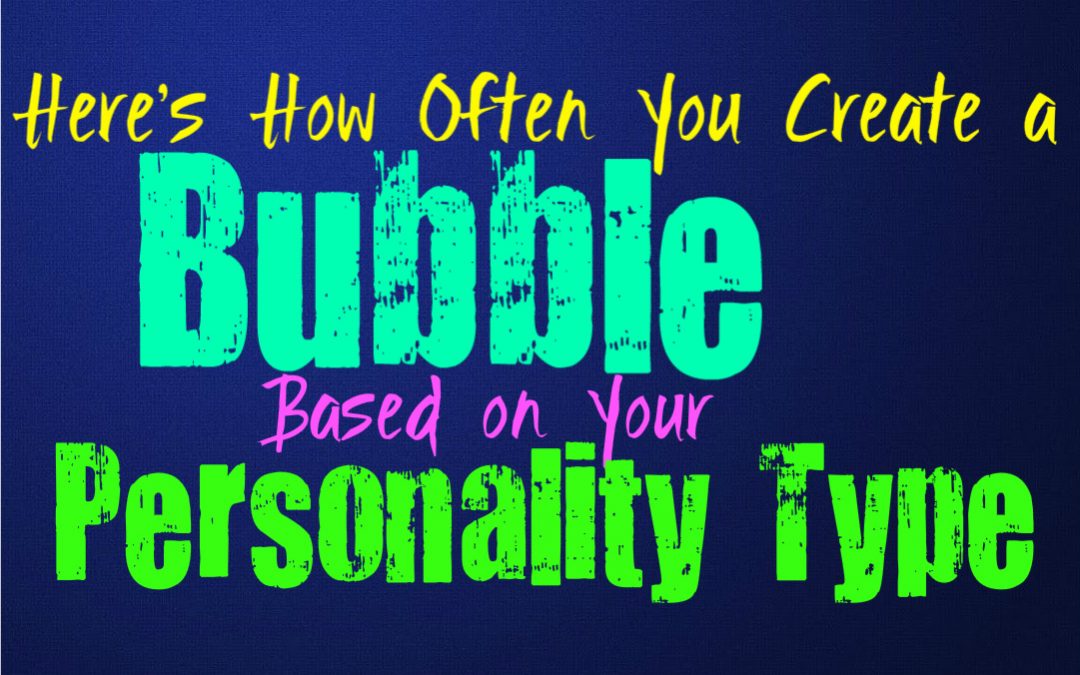 Here’s How Often You Create a Bubble, Based on Your Personality Type

When someone creates a bubble it separates them from the rest of the world and puts of a wall. This doesn’t always mean they are alone in this bubble, since some dynamic personalities can create this environment with someone they are connecting with as well. Here is how often you create a bubble, based on your personality.

INFJs definitely create a bubble when they want to separate from the rest of the world, sometimes they don’t even do this intentionally. While INFJs certainly create a bubble which is impenetrable, they can also create one that draws their loved ones in. If there is something they make a deep connection with, the INFJ will easily pull them into this atmosphere and it will be hard to remember that anyone else exists at all. They simply don’t always feel at ease around others and have such a rich inner world that they become distant from the physical world around them.

ENFJs can be truly outgoing people and have a presence that is recognizable. While ENFJs can be outgoing, they do have a rather rich internal world. This causes them to create quite the bubble when they are feeling wrapped up in this inner world, and they often enjoy pulling people in with them. If they feel a deep connection with someone then they often enjoy bringing them into their bubble, which definitely disconnects them from the rest of the world around them. This can be a truly intense feelings for their loved ones, and creates a special connection.

INFPs do create a bit of a bubble sometimes, especially when they need to be focused on their own emotions. While INFPs can create a bit of a bubble, it can sometimes cause them to disconnect from others entirely. They remain in this bubble and don’t really recognize much about what is going on around them. They seem completely distant to most people around them, but the INFP often enjoys this time spent inside of their own bubble. They need this time to recharge and dive into their own thoughts and feelings.

ENFPs definitely have less of a bubble than some types, even though they do occasionally go into it. They usually appear present in their surroundings and connected to the people around them. When the ENFP does appear to be in their own bubble, it is often because they are alone and enjoying having this time inside of their own thoughts and feelings. ENFPs are definitely outgoing and extroverted people, but they often need time to themselves more than many others extroverted personality types.

INTJs definitely create a bubble which separates them from the rest of the world. They have rather rich and active inner worlds, which makes it rather easy for them to slip into this bubble of theirs. INTJs enjoy spending time by themselves and so it feels more comfortable sometimes to alienate and disconnect from the rest of the world. INTJs can also draw others into this little bubble of theirs, and when this happens it definitely feels like the rest of the world does not exist. It is rare for them to feel connected to someone in this way, but when it happens it is truly intense.

ENTJs are outgoing people with sometimes larger than life personalities. They enjoy being around others and are definitely happy being able make a connection that is meaningful. While ENTJs are outgoing and sociable people, they do sometimes create a rather intense bubble. When they are internally focused on something or are processing something important, the ENTJ can go into this bubble for a while. They don’t alienate themselves for long though, and prefer to remain connected in a useful manner.

INTPs definitely have a very intense and distinctive bubble, which separates them from the rest of the world. They become somewhat closed off from others and can even be a bit impenetrable. While they can sometimes draw people into this bubble, it is something that rarely seems to occur. When the INTP does allow people into their bubble even the slightest bit, it is certainly a whirlwind of an experience for them both. INTPs can easily make it feel like the rest of the world does not exist, and even seems like time has completely been forgotten about.

ENTPs are very outgoing and connected people, but they do have a bubble that they go into sometimes. Most of the time they are focused on exploring the world around them and enjoy being able to bounce around to different ideas and thoughts. ENTPs do have rather rich inner minds and sometimes they enjoy diving into their thoughts and completely disconnected from their surroundings. When this happens the ENTP can also take people with them and draw them into this incredible bubble. They often lose track of time a bit and it can feel like the rest of the world has melted away.

ISTJs are often very aware of the world around them, even when they go into their introvert mode. They do sometimes have a bit of a bubble though, while it might not be as impenetrable as some other types. ISTJs are often good at going inside of their own minds and thoughts without appearing completely distant and like they are ignoring everyone around them. They simply need time to recharge and can become quickly drained by too much socializing.

ESTJs really don’t have much of a bubble and are often rather connected to the world around them. They are usually present and focused on whatever they are trying to accomplish or figure out. They don’t like becoming too distracted when they are trying to do something, because this can cause their actions to be much less efficient. ESTJs do like time to themselves and become occasionally distracted, but most of the time they prefer to remain focused and present in their actions.

ISFJs don’t like creating a bubble which separates them from the rest of the world. They try hard to focus on what is going on and get whatever task done that is important to them. ISFJs are introverts and this means they need time to themselves, but they try to do this when the day is done and they are away from everyone else. When they are around loved ones the ISFJ does their best to remain present and they don’t really go into a bubble.

ESFJs don’t usually go into much of a bubble on their own, since they try hard to remain focused on their surroundings. They often have so many things they need to get done and are very focused on the emotions of those around them. The fact that ESFJs are focused on the feelings of others makes them much more present and easy to connect with. They don’t usually find themselves going into a bubble, unless someone they love is drawing them into one.

ISTPs can definitely appear to be in a bubble oftentimes, since they have a knack for separating themselves from others. While they do seem separated and distant, ISTP are often very aware of their surroundings. They aren’t so distant that they don’t know what is going on in the world around them, they simply prefer to maintain a sense of space from others most of the time.

ISFPs are introverted people but that doesn’t mean they go into a complete bubble. There are times when they do seem rather distracted and distances from the outside world, but they prefer to remain present when they can. ISFPs are very connected to the world around them and value being able to enjoy the moment instead of become distant from it.

ESFPs definitely don’t’ like going into a bubble, instead they want to be present in the world around them. They don’t like becoming do disconnected that they are missing what is going on right in front of them. ESFPs are connected to others and enjoy being able to feel present in the moment. They just don’t find themselves wanting to distance themselves all that much, and feel unhappy when they feel a sense of disconnect.