Do You Have a Tendency to Get Ahead of Yourself, Based on Your Personality Type 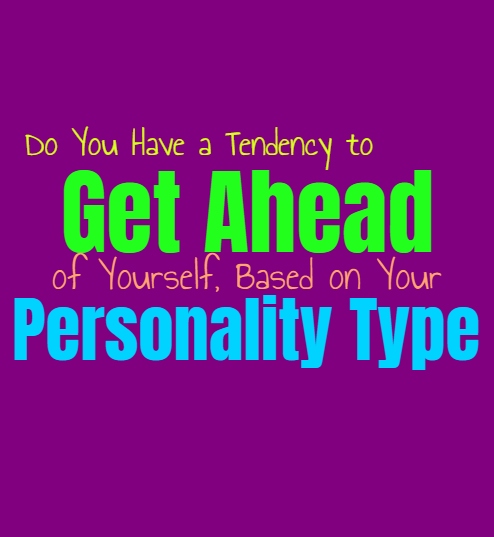 Do You Have a Tendency to Get Ahead of Yourself, Based on Your Personality Type

Some people have a tendency to get excited over things and this causes them to get a bit ahead of themselves. They jump far ahead in their project and their minds start looking so far into the future that they forget to focus on what is going on in the present. Here is how likely you are to get ahead of yourself with things, based on your personality type.

INFJs do sometimes get ahead of themselves when they become excited about something. If they are passionate about a project or a person they can often look far into the future. Their minds tend to look at what can happen down the line, and so they spend a lot of time imagining these scenarios. This can sometimes cause the INFJ to get a bit ahead of themselves, but they are often capable of reining themselves in. When the INFJ sees they are getting way ahead of themselves they try to maintain more control, but sometimes this can leave them feeling a little disappointed afterwards.

ENFJs do sometimes get ahead of themselves, but they do this because they want to prepare for every step along the way. They don’t just want to focus on the here and now, since this doesn’t help them plan for their future. ENFJs believe in always looking ahead and trying their best to create the best life they can for themselves and their loved ones. When it comes to getting ahead of themselves too much, ENFJs only do this when they are trying to overplan and take on way too many tasks and larger goals.

INFPs do have a tendency to get ahead of themselves but that is just how their minds work. They bounce from one thing to the next, always eager to explore different ideas and imagination. INFPs have vivid inner minds and they enjoy becoming excited about potential future paths and creative endeavors. They are more likely to get ahead of themselves when their ideas start to take control, causing them to imagine so many different things they could try and experience down the line.

ENFPs do sometimes get ahead of themselves but this is simply because they have such vivid imaginations. They get excited about things and their inspiration takes them in so many different directions. The ENFP will find themselves imagining things down the road and become eager to explore these different options. They get ahead of themselves because they don’t like feeling stagnant and actually enjoy envision different potential future outcomes or paths which they might be able to take.

INTJs don’t like to get too far ahead of themselves, instead they like to plan accordingly. They definitely have a plan for their goals and where they want to be in the future, but they want to be able to execute their present tasks in order to get there. While INTJs might certainly have a plan for their futures and are great at looking ahead, they don’t want to jump so far ahead that they lose sight of what they are doing. They realize it is important to not get so far ahead that they lose their focus and fail to actually achieve those goals.

ENTJs are planners who believe in making goals for their future and want to work hard to achieve them. While they do plan far ahead and work towards achieving what they want, that doesn’t mean they get ahead of themselves. ENTJs also know how to focus on the task at hand and will take the steps they need to accordingly. They don’t believe in getting overly excited about what will happen down the line, since that can cause them to become less efficient and focused on actually obtaining those things they want.

INTPs do sometimes get ahead of themselves since they have such active and creative inner minds. They have a tendency to overthink about things, and find themselves jumping onto the next thought before the first one is even finished. When the INTP becomes excited about something they can definitely get ahead of themselves, envision the entire path before they take one step towards it. This causes them to lose interest sometimes, since they feel they have already explore certain projects and might not feel the motivation to proceed.

ENTPs can certainly get ahead of themselves, since they have such active and vivid imaginations. They find themselves excited about their next projects before they even start them. They can consider all of the angles and potential outcomes and find themselves exploring these things inside of their minds. The ENTPs creativity is exactly what pushes them forward and causes them to feel excitement for the future. This can be something that also causes them to get ahead of themselves sometimes, but it doesn’t seem to hold them back in life.

ISTJs do plan for the future but they don’t often get ahead of themselves. They have a plan for what they want and they focus on doing whatever it takes to make those dreams a reality. For the ISTJ it is important to remain focused and not become so caught up in envision the future that they forget to actually live their lives. They care about building something they can be proud of and so they don’t want to get ahead of themselves and have this create mistakes.

ESTJs do sometimes get excited about the future but they also realize there is so much work to getting themselves there. They prefer to focus on getting their tasks done so that they can achieve their goals and plans for the future. ESTJs rarely get ahead of themselves, instead they focus on doing the things they need to. They are hardworking people who don’t want anything to prevent them from being efficient or being able to take care of their loved ones.

ISFJs try to focus on getting their present tasks done, although they do plan for the future quite a bit. While ISFJs believe in making goals and plans, they also realize that they can’t become so eager about these things that they fail to actually get things done. They are capable of maintaining their focus, even though they occasionally enjoy envisioning the future they want. They want to take care of their loved ones, and for the ISFJ being able to do this is very important- because of this they don’t want to get so far ahead of themselves that they make mistakes in the present.

ESFJs do believe in focusing on getting things done and taking care of their loved ones needs. While they care about being able to get things done, they also plan for the future and imagine it often. When ESFJs get ahead of themselves is often when they are trying to take on too many things at once. They find themselves wanting to be so many things to so many people, and they start to get ahead of themselves a bit with their plans. For the most part ESFJ know how to rein this in, but they do have moments where their imagination can run away with them a bit.

ESTPs are capable of thinking about the future when they need to, but they are very active in the present moment. They don’t want to get ahead of themselves so much that they fail to enjoy the present and focus on what is happening around them. ESTPs prefer to enjoy themselves and not become obsessed with what will happen down the line. They don’t often get ahead of themselves and when they do plan it isn’t so far ahead that they become distracted.

ISFPs aren’t likely to get ahead of themselves with most things, since they are good at focusing on the present. They don’t want to become so obsessed with planning for the future that they forget to enjoy their lives in the here and now. For ISFPs it is more rewarding to experience life, instead of become so caught up in planning for it that they forget what really matters most to them.

ESFPs are good at enjoying the present moment but there are times when their excitement can cause them to get ahead of themselves. ESFPs sometimes become excited for adventures and experience and can find that their imaginations take them away for a while. ESFPs are good at focusing on the present most of the time though, and prefer enjoy living in the moment. There are some times when they get ahead of themselves a bit, but this happens when they are truyl excited about something.